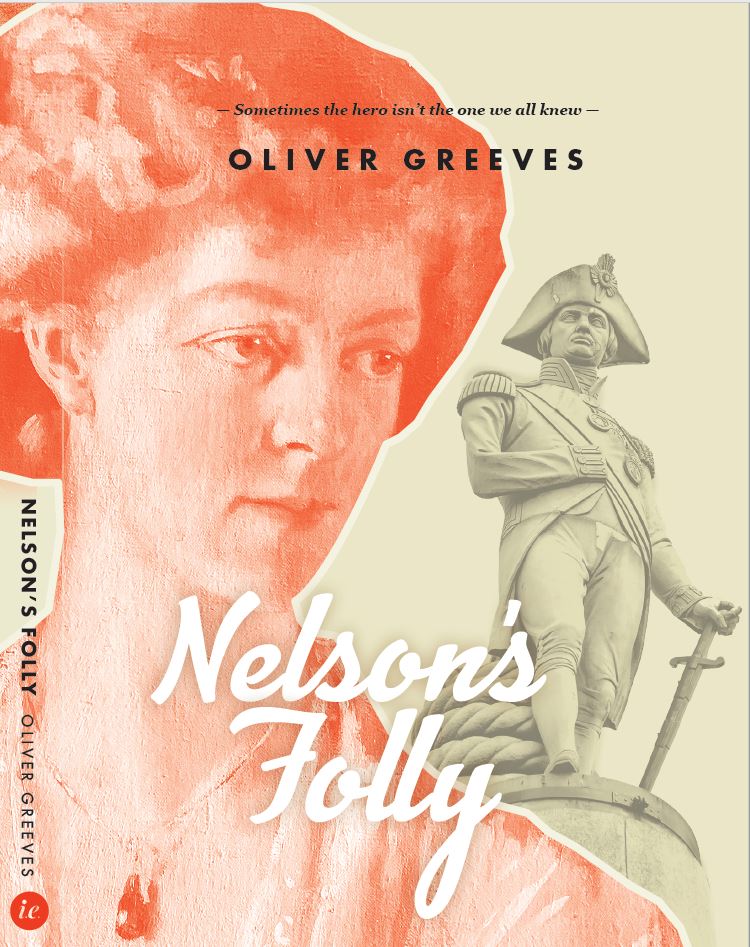 Author Oliver Greeves is a direct descendant of Frances (Fanny), Viscountess Nelson and her son, Josiah Nisbet. Today, Oliver shares the rich deposit of fascinating history and unknown detail about Fanny and Horatio and those around them, and talks about the decision to create Fanny’s story through fiction rather than biography. The resulting novel is Nelson’s Folly.

Like many fellow authors I have had a variety of jobs. Early on I was a historian and have a PhD in that discipline. Later I had a career in business and later still I was an executive coach. History is all about finding the truth of a situation looked at from the viewpoint of the people who lived it.  Business is about making things happen and coaching explores the interaction of personality and relationships. Fiction takes the reader into an imagined world where truth is often less important than plot and character.

I had a dilemma when I decided to fulfil a life-long dream of writing the untold story of my ancestor, Fanny Nelson, and her husband British naval hero Lord Admiral Horatio Nelson.  The dilemma was this: In the absence of detailed records of their relationship – Horatio destroyed most of Fanny’s letters before going into battle – how could I capture the essence of their relationship? The answer was to write a novel rather than a biography.  I hope by sharing the challenges in achieving this, I will help other authors with the same issue.

How I came to write the story

My novel Nelson’s Folly is a Napoleonic era adventure story exploring the relationships and battles of British naval hero Admiral Horatio Nelson. It provides new insights since it gives voice to those crowded out by the legend, especially Horatio’s wife Fanny, my ancestor.

Despite the “hero” as part in our family history, no one spoke of Nelson and Fanny when I was growing up. There seemed to be something sad which kept my parents from talking about either of them. Wanting to know more, the first person outside the family I asked about my ancestor Fanny Nelson, was the guide on HMS Victory which was Horatio’s famous flagship at the battle of Trafalgar. “Cold-hearted b***h,” he muttered. This was discouraging and there was little else to work with so I didn’t pursue it any further until many years later when more letters came to light. These cast a different light on the interactions between Fanny and Horatio. Increasingly fascinated by Fanny’s life and times, I travelled extensively researching her story and learning about the turbulent times of the French Revolutionary War and the Napoleonic War which followed. I was ready and I then faced the fiction versus biography decision.

Letting the Characters Speak for Themselves

I can see why many authors prefer to write historical fiction and why it was the best choice for me. Choosing fiction to explore this relationship meant I could be relaxed about the events themselves. I did not need to judge Horatio or Fanny, I just let the characters loose and their actions spoke for themselves. We know the broad truth and the novelist creates contexts or scenes in which these truths become evident to the reader. We will never know the entire truth but with the facts we do know, the imagined contexts (which themselves have elements of truth) it is possible to create plausibility. Together with the personalities, motives and values of the protagonists this is enough for a persuasive story about the hero and unappreciated wife. A host of lessor characters, who may or may not have been at the scene at a particular time, add to the texture of the novel bringing life and colour to the plot.

When I joined a writing programme at Writers NSW, entitled (ambitiously), “A Novel in a Year”, I intended to write a novel about Horatio’s stepson, Josiah. My story began in St Paul’s Cathedral with Nelson’s funeral in 1805. I intended to have flash-backs. But I realised that the back story was too extensive to be treated in this fashion so I ought to write this first. Nelson’s Folly ends in 1801 when Fanny and Horatio part company. It is written from Fanny’s perspective.  I am currently working on a second novel that starts in 1802 and is from Josiah’s perspective.

Some readers feel I should have begun the novel when Horatio and Fanny first met and ended it where I have – when they parted. Once again, a person interested primarily in history might want this. Other readers, attracted to Horatio’s magnificent achievements want to know what happened to him after he parted from Fanny. As a novelist I wanted to talk about those years when the relationship was strong and then how it came apart. This is the historical novelist’s prerogative and it is a part of the subtle locating of the story so as to bring the reader’s focus where it is intended to be.

Some readers have suggested I should have “footnoted” the book, giving references to historical facts and telling the reader what is and what is not “true.” This sounds an easy way to spoil the flow of a great story doesn’t it?

I have read most of the current biographies of Horatio. Many of these refer to Fanny but, of course, her role is a very subordinate theme in all of them and occasionally the biographers are inordinately insensitive to her part in Horatio’s life. There are two biographies of Fanny. The first, published in 1939 by E.M. Keate, a daughter of the Head Master of Eton College, I inherited from my aunt.

One passage caught my attention:

“(Horatio) often declared, and so did many of his friends, that his marriage (to Fanny) was of equal service to his character to any naval exploit he had achieved. While he was near her no step was ever taken, not any letter despatched, without being submitted to the opinion of his highly esteemed counsellor with her sound judgement and cultivated understanding.”

This was a Fanny I had never been told about. This book spoke to me.  Why was a capable woman, respected in the 18thcentury treated so appallingly by the man she loved? The answer was clear: hero worship dulls the senses even of the biographer and the historian.

A later biography by Sheila Hardy, published in 2005, draws on more recent research and is more typical of our time. It deals with many day to day details of her life but has less focus on the dramatic context or her unassailable character which was to be sacrificed for the sake of the legend.

The mystery of Fanny’s true character was finally revealed to the world in 2005 with the publication of Nelson, the New Letters by Colin White and more recently still by Martyn Downer who discovered and published Nelson’s Prize agent’s letters in the attic of a Scottish Manor House.  Long lost letters proved that rather than being a cold-hearted shrew – which supporters of Nelson’s mistress Emma had purveyed – Fanny was a warm-hearted, supportive wife who helped make him the hero he became. She loved her faithless man to the end. It was time for me to share her real story.

Publishers know very well that the book cover is a very important part of the novel. Later in life I inherited a famous miniature of Fanny, painted when she was in middle age. There are four known paintings of Fanny and unfortunately none of them do her justice. Mine which is the best known, having been carried in E.M. Keane’s biography, is of her in late middle age. I wanted a younger, more vivacious Fanny. Earlier portraits however were painted in Nevis by local artists who capture some of her character but lack artistic quality. Then who or what should I put on the cover? I wanted pictures that related to the text. The back cover was easy – pictures of one of Horatio’s famous fights as well as a grand piano, a reference to Fanny’s musicality which is an important part of the story. The front cover was to illustrate “Folly” – Horatio’s vanity and misjudgement. This is symbolised by the figure atop Nelson’s Column in Trafalgar Square – a sort of romantic ruin. But the picture of Fanny?  I finally decided on a cover picture with a double meaning. The picture is actually a fragment of a fine oil painting of Bertha Eccles, an Edwardian beauty and my Grandmother, which is also in my possession. While the reader will assume naturally enough that this is Fanny, I see it as her great great granddaughter looking back at her ancestor with sympathetic grace. The figures are dramatically finished in red and are a wonderful credit to my cover designer.

In Praise of Historical Fiction

In re-assessing the Nelson myth, I knew I would be faced with criticism and even hostility. However as both a historian and a descendant of Fanny, I felt it was time for a new generation of readers to discover her story. This they would if it was presented as an entertaining story, historically accurate in most respects – and fictional. Fanny deserves more credit than she was given by history. Like so many women behind famous men, her story was submerged by the legend of the spouse. In Nelson’s Folly I have tried to achieve a balance. I have aimed to recreate these famous events accurately but, in doing so, to use the freedom of fiction to enliven everything. I enjoyed the journey. Did I succeed? You be the judge.

Nelson’s Folly by Oliver Greeves ~~ It’s 1792 and a young widow and her son build a happy life in Norfolk with her Naval officer husband, Horatio Nelson who has been sidelined by rivals. As the Revolutionary War begins, opportunities at sea re-open for Horatio while Fanny learns the twists of Georgian society.

From France to Egypt then into the intrigues of the Court of Naples, Lord Nelson and Fanny’s son Josiah see beauty and cruelty as lives intertwine. Years pass and Horatio returns a hero, but he has changed. How is a self-reliant woman going to face down the Navy’s superstar? A compelling exploration of duty in all its forms, Nelson’s Folly is a sweeping, historically rich novel based on the true story of Horatio and Fanny Nelson and their lives together – and apart.

Oliver Greeves can be contacted via email – ogreeves@gmail.com. You can follow him on  Facebook | LinkedIn and learn more about Nelsons Folly on his website www.fannynelsonfan.com. The novel can be ordered at Amazon UK | Booktopia | Dymocks.

Many thanks, Oliver. I’m so pleased to host you on A Writer of History and to hear about Fanny Nelson. I’m sure your novel will delight and intrigue readers.

M.K. Tod writes historical fiction. Her latest novel, PARIS IN RUINS, is available on Amazon US, Amazon Canada, Kobo, and Barnes&Noble. An earlier novel, TIME AND REGRET was published by Lake Union. Mary’s other novels, LIES TOLD IN SILENCE and UNRAVELLED are available from Amazon, Nook, Kobo, Google Play and iTunes. She can be contacted on Facebook, Twitter and Goodreads or on her website www.mktod.com.

3 thoughts on “Fiction versus biography – an author’s dilemma”