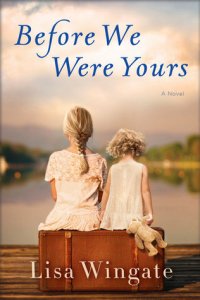 A few weeks ago, book club read Before We Were Yours by Lisa Wingate. I have to confess to avoiding this book when it came out and I’m not sure why. Perhaps because it was getting so much hype? Perhaps because I was feeling cantankerous? Perhaps just because. In any event, I powered through the novel in two and a half very satisfying days.

What did book club think? I belong to more than one book club and in this one, about twenty-five women get together to discuss the latest read with the deft assistance of our moderator Jill. For those who haven’t read Before We Were Yours, the story is told in two timelines: present day and 1939 Memphis Tennessee. It is “based on one of America’s most notorious real-life scandals—in which Georgia Tann, director of a Memphis-based adoption organization, kidnapped and sold poor children to wealthy families all over the country.”

Jill opened the conversation by asking the group if anyone had experience with adoption and a surprising number of participants gave personal examples. Next up was the general question of whether we liked the book and would recommend it — a resounding yes!

Several topics elicited lively discussion: the burden of family expectations; the desire to be who you want to be; the theme of sisterhood; the question of whether these adopted children were better off with wealthy families; family bonds; the southern way of life; the crime itself and the motivation of Georgia Tann and those who facilitated her business; a famous family’s right to privacy; present-day nursing home scandals.

With two timelines, there is often a sense that one is more powerful than the other and in this case many in the group preferred the 1939 timeline over the one set in present day. I’m in that camp as I felt Wingate brought great authenticity and skill to that setting and its compelling characters.

Lovely metaphor: “Nothing takes you from thirty years old to thirteen faster than your mother’s voice rebounding up the stairs like a tennis ball after a forehand slice.”

Personally meaningful: “One of the best things a father can do for his daughter is let her know that she has met his expectations.”

On riverboat wisdom: “Briny says there’s good folks on the river and folks you can’t trust, and it’s best to figure out who’s who from a distance.”

On politics: “Get the women, and you’ve got the vote, my father always says. Only foolish men underestimate their power.”

More lovely metaphors: “A sick feeling bubbles in me like a black-water eddy. It’s got no place to go. It just spins round and round in circles.”

On living life: “Well, that’s one of the paradoxes of life. You can’t have it all. You can have some of this and some of that or all of this and none of that.”

On secrets: “Secrets have a way of coming out. That’s a bit of wisdom my father has shared with me many times. Secrets also make you vulnerable to your enemies, political or otherwise.”

Before We Were Yours – a highly satisfying read.