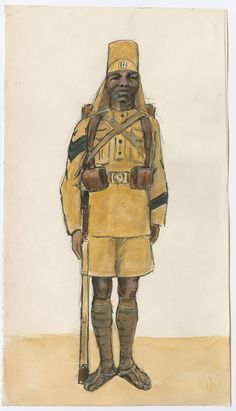 We left Henry Tod yesterday with his journey to Nairobi partly complete. Picking up the threads today.

We got not Nairobi at 3 o’clock that afternoon and were met at the station by a staff major, who detailed us to our respective battalions. The K.A.R. is a comprehensive force and is comprised of 5 or 6 regiments with headquarters in different parts of the country; B.E.A. [British East Africa], Nyasaland [present day Malawi], Jubaland [now part of Somalia], etc. Each regiment has three battalions. I am in the 2nd battalion of the 3rd regiment, known as the 2/3rd K.A.R. We messed that night at headquarters of the 3rd K.A.R., which is Nairobi, and next day we were ordered to proceed to the training camps, about 10 miles out.

Our kit was taken by ox waggon and we were given horses to ride there, with a native guide. At least 12 of us were mounted, the others getting a lift out by other means. We started out about 3 p.m. and it began to rain almost immediately and we all got very wet. The horses were fresh and there were several spills. I could just manage mine but had to take it out of him in the early stages. When we thought it was time we were getting there, we consulted the guide, as there was no sign of a camp anywhere. We then learned he did not know where the camp was or where he was himself. [Good grief!]

We scouted around for a bit but it was evident the camp was not in that neighbourhood, so after telling our “guide” what we thought of him in good English and bad Swahili we returned to Nairobi, there to be told we had taken the exact opposite direction. As out kit had gone on we had to follow our home and get to camp somehow so we made a fresh start with a fresh guide, with not much daylight left. The track skirted a forest with the open plain on our left and we had only gone about two miles when we found ourselves in the middle of a huge herd of buck and zebra which apparently had been lying down for the night. They didn’t know which way to run and the result was a stampede in which our horses joined. The beasts would not leave the track and I had the novel experience of doing a flat race with a buck on one side and a zebra on the other. It only wanted me to blaze off my six-shooter to complete the Wild West touch.

The herd eventually scattered and night came down with its tropical suddenness. It was soon pitch black and we had some difficulty in keeping touch with each other. We got to camp wet, hungry and thirsty but found a warm welcome waiting us and a good meal at one of the battalion messes. We were shown our “bandas” or straw huts and as our boys had arrived well before us everything was ready for us. Thus ended the great journey which has taken well nigh three months.

Next morning we reported to our respective commanding officers and have since been “carrying on” in the usual way – this time with native troops. My battalion is at present in the field in German East and I am attached for the moment to a battalion of the 2nd K.A.R. I am favourably impressed with the “askaris” and they drill as well if not better than our own soldiers. [askari is a word for soldier] They of course understand the English words of command but once you get beyond the mechanical side of the business they get lost. This lot I am with are Nyasas and do not speak Swahili, which is really the language of the coast. We have been recruiting from every tribe in the country and they have all their own dialects – the Nandi, Wakamba, Kikuyu, Kavarondo &c. A notable exception is the Masai, the most warlike of the tricks, who have so far refused to be recruited.

I have been twice out shooting, and the bag so far is a wildebeeste and Thomson’s Gazelle – known as a Tommy. It looks easy enough from the train but when you get out on the plain amongst them it is a different story. A three mile tramp from camp across a couple of ravines or dongas and you are on happy hunting ground. It is painstaking work stalking the brutes and to get the wildebeeste I sighted my rifle at 300 years. He presented a broadside target as he was standing sentinel to a herd of hartebeeste which had got wind of me and had made off. The shot did not bring him down and he made after the rest of the herd but he soon started to cavort around, no doubt wondering what was inside him. [poor fellow] I gave him another shot which missed but he soon collapsed before going much further. I closed on him cautiously with my boy well to the rear, but he had kicked his last when I got up.

My henchman came into his own at this stage and with my brand new hunting knife he soon carved up the carcass in the most scientific manner and with the aid of another buy carried a goodly portion back to camp. The meat was pretty tough but the black boys made short work of it. The buck meat was more digestible and made a welcome change to the rain beef.

I share my “banda” with another man and it is on the outskirts of the camp. The hyenas come right into camp every night on thieving bent and you hear their mournful howl all around you. My friends says he heard one sniffing inside our door and shouted at me to wake up but I remained blissfully ignorant of it all.

As this has brought my doings up to date I will now close.

Imagine how all this would seem to a man from Scotland? And what a contrast to the trenches in France and Belgium.