The Alice Network with Kate Quinn 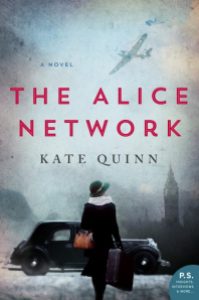 What book am I recommending these days when friends ask? The Alice Network by Kate Quinn. Why? Because it grabbed me from the very start and wouldn’t let go. And what special ingredients does it have? Flawed, heroic, and intriguing characters – check. Tension that builds and builds – check. A superb sense of history and setting – check. Strong writing – check. An immersive experience – check. A flawless weaving of two timelines – check. What more could you ask for?

Better still, Kate Quinn has graciously agreed to answer a few questions about The Alice Network and her writing.

Can you tell us a little about the inspiration for The Alice Network?

I first came across the historic Alice Network in a fantastic non-fiction book called “Women Heroes of WWI” by Kathryn J. Atwood, and was astounded that I’d never heard of this spy network or its brave operatives before. It was a story that begged to be told.

Eve and Charlie are powerful characters – do you use any special techniques to outline your characters in advance? And if so, how did you decide on the attributes for these two women?

I do a lot of outlining with Scrivener in advance, tracing character arcs, background, inner wounds, etc. I knew I wanted Charlie to be pregnant and unmarried, because that was an effective catalyst to get her to Europe and because it gave her story emotional ballast–being an unwed mother is a huge problem to overcome in the 40s! And it was my husband’s idea to give Eve a stammer; he has a similar speech impediment, and has faced many of the same struggles Eve does. I loved the idea of having a heroine with a speech problem–taking what could be a weakness, and weaponizing it into an advantage as she lets people underestimate her.

Writing a dual-timeline novel is challenging. How did you keep your plot organized and ensure that the pacing flowed effectively back and forth?

What did you leave out of the novel – scenes that went by the wayside? Characters you discarded?

Quite late in the editing process, I came across some wonderful information about real life members of the Alice Network–all through letters discovered in family archives by their modern-day descendants. These real-life figures make tiny cameos in the book, but I’d have loved to make them bigger characters with more story and plot. If I hadn’t been 5/6 finished with final edits, I would have!

You’ve previously written about ancient Rome and the Italian Renaissance – what made you change time periods? Were WWI and WWII easier eras to tackle?

I’ve never been a one-era-only writer; I’ve always had potential story ideas set all the way from the ancient world to the 20th century. So when I saw the recent boom in 20th century war fiction, it made sense to revisit some of those ideas (“Book about a female spy…? Use a real spy…?”) and see if anything took off in my imagination once I started researching. And it did!

Many thanks for answering my questions, Kate. I’m sure both readers and writers will find your experiences fascinating.

The Alice Network by Kate Quinn1947. In the chaotic aftermath of World War II, American college girl Charlie St. Clair is pregnant, unmarried, and on the verge of being thrown out of her very proper family. She’s also nursing a desperate hope that her beloved cousin Rose, who disappeared in Nazi-occupied France during the war, might still be alive. So when Charlie’s parents banish her to Europe to have her “little problem” taken care of, Charlie breaks free and heads to London, determined to find out what happened to the cousin she loves like a sister.

1915. A year into the Great War, Eve Gardiner burns to join the fight against the Germans and unexpectedly gets her chance when she’s recruited to work as a spy. Sent into enemy-occupied France, she’s trained by the mesmerizing Lili, code name Alice, the “queen of spies,” who manages a vast network of secret agents right under the enemy’s nose.

Thirty years later, haunted by the betrayal that ultimately tore apart the Alice Network, Eve spends her days drunk and secluded in her crumbling London house. That is until a young American barges in uttering a name Eve hasn’t heard in decades, and launches them both on a mission to find the truth . . . no matter where it leads.