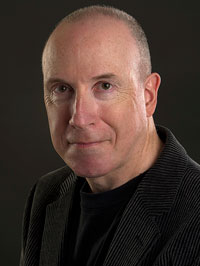 When history infuses contemporary fiction, powerful stories can emerge. Author R.B. Young has written such a story and today responds to some of the same questions I’ve asked many authors of historical fiction. Have a listen.

MKTod: Are historical novels inherently different from contemporary novels, and if so, in what ways?

RBYoung: I say, no: in certain cases, a novel can blur the lines between the historical and contemporary categories. Specifically, in one of my own novels, historical events, customs, and symbols play a major role in the contemporary action.

Let me expand on that idea. My mystery novel The Two Row Scholar has a contemporary setting, the western fringe of Toronto during 2006-2007. However, this book’s subject matter required extensive historical research. A key conflict in the tale pits a First Nation, the fictitious Mohawk reserve Coyote River, against the neighbouring town, Ewing. Despite the made-up place names, the story derives (loosely) from the Grand River land dispute — aka “Caledonia,” after residents of the small southwestern-Ontario town clashed violently with a bordering reserve, Six Nations of the Grand River.

When I first heard of the Caledonia dispute, I thought, “Why is this happening?” As a “typical” white Canadian, I had no idea of what had generated the quarrel, but I knew that people don’t fight over nothing. I wanted to understand, and thus the idea for a novel was born: using the mystery genre, I wanted to explore the history of Iroquois-British (and later Iroquois-Canadian) relations, including what led ultimately to Caledonia in 2006.

In the resulting (fictitious) story, conflict based in historical grievances flares into a First Nations protest and road blockade, which inconveniences local townsfolk, that situation leading to violent clashes. And the history is explicitly spoken about, and debated by, the characters. Historical and contemporary issues have, to a degree anyway, fused. Whether the novel is truly an historical-contemporary hybrid, I leave to you to decide.

If you are an author, what techniques do you use to ensure that conflict, plot, setting, dialogue, and characters are true to the time period?

As in classic historical fiction, I had to get the history right, but I also had two other tasks: making the history integral to the conflict taking place in present time (2006), and describing historical facts and Mohawk cultural traditions without boring info dump.

First, to integrate Iroquois history with story conflict, I made two key characters (teenage girls at a private school) be from (a) the Mohawk reserve and (b) its bordering town, respectively. Because these young women, Pamela Renard and Rose Molloy, are from opposing sides of the land quarrel, sparks fly between them from the start, and their dialogue on historical events occurs within high-conflict scenes.

My second special task, avoiding historical info dump, required tactics for character and plot. For example, Pamela, the Mohawk girl, recites a traditional morning prayer while she’s in a woodlot on the school’s property. The plot’s genesis also brings historical facts to the foreground without seeming forced. That is, Pamela is attending the private school on a scholarship program called The Two Row Exchange, with the Two Row Wampum treaty (dating from 1613) as its basis.

These strategies around historical detail work, I hope, to make The Two Row Scholar an engaging tale of contemporary racial politics in Canada, while educating white Canuks about an undeservingly little-known part of Iroquois, British, and Canadian history.

Many thanks for being on the blog today, Bob. Your comments extend the concept of historical fiction. Wishing you great success with The Two Row Scholar.

1 thought on “Even contemporary fiction can have historical elements”