Recently, Mom gave me her parents’ photo album from their 1936 trip to France for the Vimy memorial dedication. Their pictures are a poignant reminder of a war that affected so many, and I, in my own small way, commemorated in Unravelled through a similar trip taken by Edward Jamieson and his wife Ann.

When my husband and I travelled to northern France, we attempted to visit some of the places where my grandfather had served during WWI. I knew he and my grandmother had done the same thing in 1936 but seeing their pictures made me realize we had photographed some of the very same places which brought a smile to my face.

Ypres Cloth Hall – only rubble was left of the Cloth Hall (Lakenhalle) after WWI ended. Reconstruction began in 1928 and by 1934 the western wing and bell tower had been completed.  Judging by the background of the 1936 photo, it looks as though  my grandparents were standing in front of some remaining rubble. My grandfather was stationed was in the trenches near Ypres for many months of the war (he’s in this picture, my grandmother is the stylish-looking woman on the left). 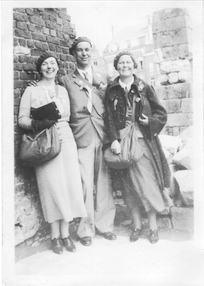 Vimy Memorial – if you have ever seen this amazing memorial you will have struggled to keep your tears in check. 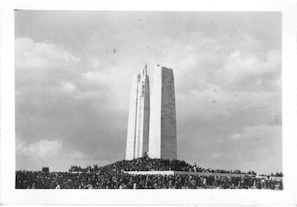 It’s a Canadian memorial, dedicated to all who served in WWI and built at Vimy to commemorate a battle won decisively by the Canadians.

Over 5,000 people attended the dedication ceremony – my grandparents were there.

Trench preserved at Vimy – I can’t be sure that these photos are taken at the same location, however they look very similar. Unlike these pristeen looking specimens, the trenches were a living hell. Imagine being one of the men visiting in 1936, remembering what it was like to eat, sleep, stand guard, and fight from the trenches. 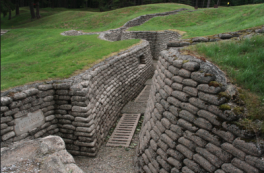 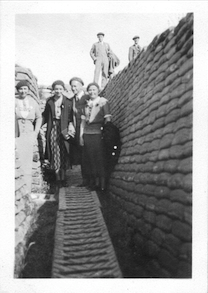 Vimy Salute – During the dedication ceremony, planes flew past to pay tribute to those attending and those who died in battle. I wrote of this moment in Unravelled.

“To begin the dedication, a lone bugler played Last Post, its haunting sound echoing across the ridge. Tears ran freely: tears for fallen comrades, tears for lost youth, tears for what was and what might have been. When the last note faded, a formation of Amiot 143s, French twin-engine bombers, roared across the horizon. For Edward, time slid backwards …”

Cambrai was another stop on their tour. Grandpa served there as well. He was in the Signal Corps, involved in transmitting messages during the heat of battle by whatever means were necessary. 180,000 soldiers from Britain, Canada and New Zealand were involved in Cambrai – part of the Hundred Days War and the last big effort by the Germans. The time was early October 1918.

My grandparents took two pictures – ours are very similar. 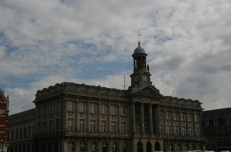 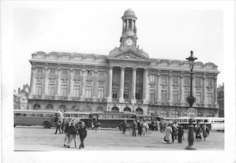 After such an emotional time my grandparents went to Paris and then to England visiting Oxford where my grandfather was born and Magdalen College where his father worked before emigrating to Canada. Mom recalls that they were gone all summer leaving her at a girls camp and my uncle with relatives. Grandma and Grandpa returned to Toronto to learn of the death of my great-grandfather.

When I began writing, my objective was to investigate the lives and times of my grandparents. The research was inspirational; the result is Unravelled.

M.K. Tod writes historical fiction and blogs about all aspects of the genre at A Writer of History. Her latest novel, LIES TOLD IN SILENCE is set in WWI France and is available in paperback from Amazon and in e-book formats from Amazon, Nook, Kobo, Google Play and iTunes. Mary can be contacted on Facebook, Twitter and Goodreads. UNRAVELLED is also available at the same retailers.

I’ve been both mesmerized and horrified by what I’ve read about Vimy, which took place 97 years ago today. In Unravelled, Edward Jamieson, who fought at Vimy Ridge, remembers that battle in two vivid flashbacks. Lies Told in Silence – soon to be published – looks at the same battle from the viewpoint of Helene Noisette, a young woman living in a town not far away from the ridge.

Here’s an excerpt from Lies Told in Silence. For more than two months, Helene Noisette and her brother, Jean, have been watching soldiers prepare for battle. Later in this novel, Helene will meet Edward Jamieson.

They left the house without a sound and ran, fear pounding with every step, following familiar paths, leaping across melting streams, scrabbling through ferns and bushes. As they approached the hill, she heard the opening roar, a deafening sound that shook her body. In an instant, a second crash followed, splitting the sky directly overhead, penetrating her world like a never-ending drumroll.

Helene and Jean clawed their way up the hill. The guns grew even louder, and a sharp, acrid smell filled the air. Her legs had almost given out when they reached their perch and stood with no need to crouch down and hide, for no one could possibly notice them given the furor of action rippling across the battlefield. Never in her wildest dreams could she have imagined such a scene. 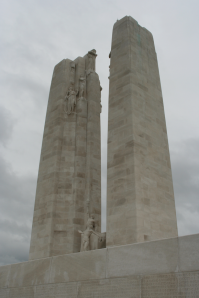 Instead of orderly drills or the calm stacking of sandbags and trucks waiting to load or unload, below them was a sea of churning mud; grey dawn streaked the sky; there were sharp flashes of red, the rumble of airplanes overhead. In the far distance near the ridge, an orange glow hovered like a bulging midnight sun. Shells burst from all directions, illuminating soldiers advancing, bayonets flashing with deadly purpose.

Helene looked at Jean, a mix of fear and awe on his face. She said nothing, for what possible words could make sense of the destruction carried out below? In the preceding weeks, what they had heard and seen—the bright snap of flares and answering clouds of smoke, the stuttering back and forth of machine guns, the sharp whine as planes breached the horizon, the gentle drift of observation balloons—were only the barest hints of reality. Helene and Jean were silent, standing vigil over an unfolding battle, honouring those who fought for their freedom, men they would never know.

Wherever she looked, troops moved forward, less than thirty metres behind exploding bombs launched by their own artillery. This barrage was their shield, a curtain of steel protecting them from German counterattacks. Step by step they advanced, scrambling across uneven ground, thick clumps of earth flying through the air around them.

Gradually, the sky lightened, bringing the battle into sharper focus. A sudden flurry of snow obscured her view, and she wondered how the soldiers could possibly find their way. The snow left as quickly as it had appeared, and in the far, far distance, she saw white and black puffs of smoke; then a plane, trailing black streamers, emerged from the far left and flew low over the scene, its klaxon sounding like an ancient battle cry.

While they watched, Helene thought of [her brother] Guy. Had he grown accustomed to these mind-numbing sounds mixed with exploding bursts of earth and shrapnel? Was this what it had been like when he was wounded? Was he brave, or did he fear for his life? Did he lead his men with care? Did he shout at death as it whirled around him? How could he face battle again and again, her wonderful brother who laughed and teased, enjoyed the give and take of argument, took pride in his studies, loved his family? How could any of them?

Read Pierre Berton’s Vimy for an amazing account of preparations for the assault on Vimy Ridge and the battle itself. 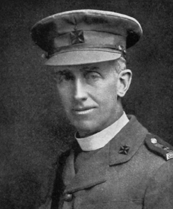 While preparing a post about the Vimy Memorial dedication ceremony, I came across a poem written by Frederick George Scott. In 1914, at the age of 53, Scott enlisted with the Canadian Army. According to Wikipedia, he served as the senior chaplain to the 1st Canadian division. He was both an Anglican priest and a poet.

Project Gutenberg offers Scott’s book The Great War as I Saw It, a full account of his service during WWI. For an earlier post about this book, click here.

Chapter IX relates his first Christmas of WWI and it seems fitting to include a bit here. Scott had decided to spend that day with the men who were in the front lines.

“As soon as I could cross the bridge, I made my way to the trenches which the 16th Battalion were taking over. They were at a higher level and were not in a bad condition. Further up the line there was a barn known as St. Quentin’s Farm, which for some reason or other, although it was in sight of the enemy, had not been demolished and was used as a billet. I determined therefore to have a service of Holy Communion at midnight, when the men would all have come into the line and settled down. About eleven o’clock I got things ready. The officers and men had been notified of the service and began to assemble. The barn was a fair size and had dark red brick walls. The roof was low and supported by big rafters. The floor was covered with yellow straw about two feet in depth. The men proceeded to search for a box which I could use as an altar. All they could get were three large empty biscuit tins. These we covered with my Union Jack and white linen cloth. A row of candles was stuck against the wall, which I was careful to see were prevented from setting fire to the straw. The dull red tint of the brick walls, the clean yellow straw, and the bright radiance of our glorious Union Jack made a splendid combination of colour. It would have been a fitting setting for a tableau of the Nativity.

The Highlanders assembled in two rows and I handed out hymn books. There were many candles in the building so the men were able to read. It was wonderful to hear in such a place and on such an occasion, the beautiful old hymns, “While Shepherds Watched their Flocks by Night,” “Hark the Herald Angels Sing,” and “O Come All Ye Faithful.” The men sang them lustily and many and varied were the memories of past Christmases that welled up in their thoughts at that time.”

Later he offered a second communion service for those men who had been on duty the night before.

Near Ypres in April 1915, he wrote Requiescant:

In lonely watches night by night,
Great visions burst upon my sight,
For down the stretches of the sky,
The hosts of dead go marching by.

Strange ghostly banners o’er them float,
Strange bugles sound an awful note,
And all their faces and their eyes
Are lit with starlight from the skies.

The anguish and the pain have passed
And peace hath come to them at last,
But in the stern looks linger still
The iron purpose and the will.

Dear Christ, who reign’st above the floor
Of human tears and human blood,
A weary road these men have trod,
O house them in the home of God.

Wishing you joy for this Christmas season and all good things in 2014.