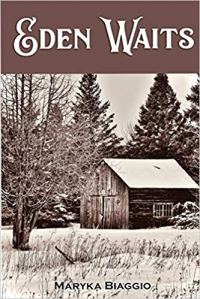 Maryka Biaggio is a professor of psychology turned novelist who specializes in fiction based on real people. In 2013 Doubleday published her debut novel, Parlor Games, the true story of a small-town Michigan girl turned world-class con woman. Eden Waits, the fictionalized account of a utopian community in 1890s Michigan, was published by Sunbury Press in 2019. Maryka has been on the blog before talking about what makes historical fiction tick.

Eden Waits is based on the true story of Hiawatha Colony, a utopian community founded in 1894 in Michigan. The experiment raised many questions: Is it possible for a community to sequester itself from the larger society and its laws? What kind of a leader does it take to ably manage internal conflicts and relationships with those on the outside? Can a group of individuals develop an economic system that insulates its members from the hardships of the larger society? And is it possible for a self-contained community to survive on a long-term basis?

In the early 1880s Abraham and Elizabeth Byers sold their farm in Southwest Michigan to homestead acreage in the Upper Peninsula of Michigan. They invited their kin to join them, and eight families in all proved up a total of 1280 acres—enough to log, hunt, fish, and farm for decades to come. Brothers, sisters, and offspring worked to clear some of the timber-rich land, build cabins, and start gardens and orchards. Some members of the settlement took jobs at the nearby Chicago Lumbering Company to bring in wages for their families. The community was known as the Byers Settlement, and Abraham Byers reigned as its patriarch.

Then the Panic of 1893 hit, ushering in the worst depression the United States had ever experienced. During the four-year depression that ensued, unemployment soared to as high as 25%. Even before the panic struck, many people had grown restless with low wages, poor working conditions, and monetary policies that favored the wealthy. In 1892 discontented workers formed the Populist Party to represent common people—especially farmers—against the entrenched interests of railroad barons, bankers, corporations, and the politicians who catered to their wishes. The Party called for currency reform, public ownership of transportation systems, an eight-hour working day, and a pension system for workers.

Abraham Byers allied himself with the Populist Party and stumped for its candidate for President, James B. Weaver. But Weaver won only 8% of the vote, leaving “third-partiers” deflated and even more discontented with the government.

Abraham Byers refused to let the election results deter his political goals. Several of Byers’ kin worked for the Chicago Lumbering Company, and during the depression the company cut workers’ wages. Abraham railed against the company’s control over its mill workers, lumberjacks, and even independent jobbers. When the workers decided to strike, the company threatened to fire all the workers, squelching their effort. Then they blamed Abraham Byers for stirring up trouble.

That’s when Abraham discovered The Product-Sharing Village, a book by Walter Thomas Mills, a famous orator and fellow third partier. Mills put forth a blueprint for a cooperative village designed to take care of its own. The notion of an economically self-sufficient community intrigued Abraham. He found many of the conditions Mills laid out for such a village already in place at the Byers Settlement: plentiful and rich lands, hard-working people, and equipment for enterprise. Giving the settlement over to a product-sharing village, he thought, was a perfect way to redress the plight of his kin and other workers suffering at the hands of the Chicago Lumbering Company.

Abraham straightaway wrote to Mr. Mills, proclaiming his intention to form a product-sharing village. He invited Mr. Mills to join the endeavor. To his great surprise, Mills consented and moved from his well-appointed home in Chicago to the rustic settlement. Abraham and Mr. Mills persuaded all the settlement members to deed their land to the incorporated entity they named Hiawatha Colony. Their grand experiment was publicized in Populist Party periodicals. People from as far away as Texas flocked to the Colony by train and wagon, bringing all their worldly possessions, including livestock. At its peak, Hiawatha Village attracted nearly 200 members, milled its own lumber, grew some of its own crops, and sold goods manufactured on its grounds.

But Chicago Lumbering Company executives were set against Abraham and the Colony, and they took every opportunity to undermine it. The Colony found itself struggling against not only the Upper Peninsula’s harsh winters and external enemies, but internal strife as well. Abraham was eventually faced with the question: Should he dissolve the Colony and compromise his ideals or should he take over the reins himself and try to salvage the Colony?

Hiawatha Colony, like other utopian experiments, ultimately failed. But there will be more such experiments, and modern-day attempts continue to raise questions: Where is the line between community norms and societal laws? Does the government have a responsibility for people who are members of and perhaps pledge allegiance to the “laws” of separatist communities? What are the differences between cults and communities of choice?

One of the purposes of historical fiction is to remind us of the lessons learned in past eras. But sometimes what we learn is that history repeats itself.

Many thanks, Maryka. As your post suggests, we can draw parallels to today from Hiawatha Colony. Perhaps we can learn from Eden Waits.

Eden Waits by Maryka Biaggio ~~ based on the true story of Michigan’s utopian experiment. In 1893, financial panic imperils the settlement homesteaded by Abraham and Elizabeth Byers. Abraham, a preacher and self-proclaimed man of the people, rails against greed and corruption and launches Hiawatha Colony, a product-sharing community designed to support its members through self-sufficiency. But can this cooperative community withstand internal strife, the harsh wilds of Michigan’s Upper Peninsula, and the antagonism of the outside world? When discord rocks the community, Abraham must choose between dissolving the colony and compromising the ideals that elevated him to its patriarch.

Although numerous utopian communities were formed in the United States in the nineteenth century, there are few accounts of the day-to-day life and challenges faced by them. Abraham and Elizabeth were in their advanced years when they homesteaded acreage in Michigan’s Upper Peninsula. What drove them to risk so much to build a community of kin and like-minded idealists? This carefully researched historical novel explores the struggle between ideals and practicality and the collision of political and religious realms. The events bear surprising parallels to today’s climate of polarization, questions about leadership, and concerns over corporate power.