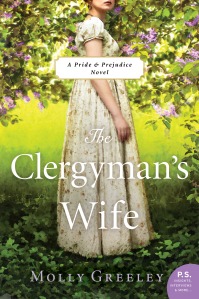 Molly Greeley author of The Clergyman’s Wife reflects on how those living in Jane Austen’s time coped with their infants. Anyone who’s been involved in an infant’s care will empathize; some might even wish that laudanum was common in our times! Welcome, Molly.

The first few months of my oldest child’s life will no doubt sound achingly familiar to many parents.

My daughter was born with her eyes wide open; I can vividly remember my first glimpse of her as the midwife held her up above my suddenly empty belly—serious dark eyes above the smush of her cheeks, her brow raised and wrinkled in an expression of deep concern. Over the next few weeks, she would continue to express her concern over her new circumstances by crying almost constantly; if I wasn’t holding her—and even sometimes when I was—she screamed and screamed with ceaseless energy. She only napped or slept in my arms; nights were a blur of walking and rocking and singing increasingly edgy, clench-jawed versions of lullabies, and my days were devoted to holding her. One of my deepest regrets is that I didn’t appreciate those baby cuddles while they lasted, but with a new mother’s severely sleep-deprived, slightly manic certainty, it seemed like my life was never, ever going to belong to me again.

At one point, sitting on the sofa with my sleeping child in my arms, I remember looking dazedly around at the mess my house had become and wondering how on earth parents centuries ago had dealt with this phase of life. Not so much the very wealthy—I assumed the well-off could hire wet-nurses for cluster feedings, nannies for general childcare, servants and cooks to ensure the family was fed and their house didn’t look like a disaster zone. But what about the poor? Despite the incredible overwhelm I was feeling, I was privileged that the worst that happened as a result of my arms being exclusively my daughter’s domain for several months was that our house was messier than usual and we ate pizza a lot more often than we used to.

But what about women—because, let’s face it, it would generally have been women who bore the brunt of childcare work in addition to their other responsibilities—whose families’ well-being depended on them being able to keep up with their other work, even while there was a screaming newborn to care for as well? Women who had to do the grueling work of washing the laundry by hand—their own, and perhaps others’ taken in to supplement the family income? Who had to haul water, or there would be no water that day; who had livestock to care for, clothing to mend or sew entirely by hand, meals to cook over a fire that had to be kept burning, crops to sow and harvest? What if they had to go to work in a factory? Did they just put their babies down and let them cry it out (and if so, how did they deal with the resulting fraying of their nerves?). Did they (and in my mind, this was a sort of dark joke) drug their babies to keep them quiet?

Years later, when I sat down to write my debut novel The Clergyman’s Wife, these questions came up again. Set in Regency England, it’s the story of Charlotte Lucas (of Jane Austen’s Pride and Prejudice) after her marriage. Because Charlotte in my story has an infant daughter, I spent a lot of time researching how women in that time period balanced the incredible amount of work required simply to survive with the incredible amount of work required to keep a small baby content. What I discovered is probably not news to writers and readers of historical fiction from around this time period; but it was news to me. That half-hysterical mental joke I had with myself about new mothers drugging their babies so they could get on with their other responsibilities was, in fact, a grim reality.

The first name I stumbled upon in my research was Godfrey’s Cordial, a combination of laudanum (a tincture of opium) and sweet treacle to mask the laudanum’s bitter taste, which was first sold in the 18th century. Laudanum use itself was widespread among adults, recommended for every sort of ailment from diarrhea to menstrual cramps, but Godfrey’s Cordial, was one of several concoctions marketed directly to parents and nurses to help quiet their charges when they were fractious or teething, with predictably tragic results. Some children died of overdose—the medicines were unregulated, and amounts of opium could vary from bottle to bottle, so even following the same dosage every time did not guarantee the same amount of opium was administered every time—while others simply wasted away, too lethargic even to cry when they were hungry. Though concerns were periodically raised over the high rate of infant mortality and though you can still find cartoons lampooning the use of such products for children, it wasn’t until the early 20th century that these drugs started to be regulated.

Luckily for baby Louisa in The Clergyman’s Wife, Charlotte is fortunate enough to have both help with her child and enough money that she needn’t turn to medicinal means to keep her daughter quiet while she works (though it should be added that it was not only the poor who turned to such means; nurses of well-off families sometimes used these “soothing” medications as well, and the use of both laudanum-based medicines and toxic teething powders was widespread). It is, however, a historical nugget that stuck in my mind even after I finished writing, one that eventually formed the basis for a new novel (currently—gulp!—in the editing stages). As with so many other things we discover when we delve into the nitty-gritty of history, facts are sometimes more disturbing than fiction.

Many thanks, Molly. I’m sure Jane Austen fans will be delighted with The Clergyman’s Wife. I’ll never listen to a crying baby in quite the same way!

The Clergyman’s Wife by Molly Greeley ~~ RELEASES DEC 3, 2019 ~~ Charlotte Collins, nee Lucas, is the respectable wife of Hunsford’s vicar, and sees to her duties by rote: keeping house, caring for their adorable daughter, visiting parishioners, and patiently tolerating the lectures of her awkward husband and his condescending patroness, Lady Catherine de Bourgh. Intelligent, pragmatic, and anxious to escape the shame of spinsterhood, Charlotte chose this life, an inevitable one so socially acceptable that its quietness threatens to overwhelm her. Then she makes the acquaintance of Mr. Travis, a local farmer and tenant of Lady Catherine..

In Mr. Travis’ company, Charlotte feels appreciated, heard, and seen. For the first time in her life, Charlotte begins to understand emotional intimacy and its effect on the heart—and how breakable that heart can be. With her sensible nature confronted, and her own future about to take a turn, Charlotte must now question the role of love and passion in a woman’s life, and whether they truly matter for a clergyman’s wife.