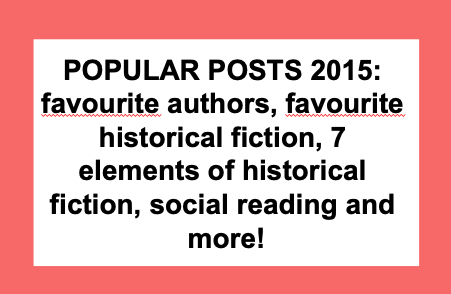 2015 was a banner year for articles on historical fiction that struck a chord with followers of A Writer of History. I hope you enjoy reading or rereading some of these.

In 2015 Inside Historical Fiction became a new focus for A Writer of History. With this topic I and others looked under the covers of historical fiction to illuminate those attributes that make it different from contemporary fiction. If you’d like to explore this topic, use the search term ‘inside historical fiction’.

Author T.K. Thorne offered an analogy between painting and writing with some excellent words of advice that appealed to many readers.

7 Elements of Historical Fiction is a perennial favourite. It explores how character, dialogue, setting, theme, plot, conflict, and world building – the basic elements of any story – are challenged for historical fiction.

During 2015, I also explored social reading beginning with 10 thoughts on the subject. Social reading refers to the conversations readers have with one another, with writers and with bloggers in the changing dynamic of reading.

Beyond entertainment, what is the purpose of historical fiction?

In 2015, I conducted my third reader survey. The results were a popular read.

In 2015, I asked readers to list their favourite historical fiction titles for the first time. Lots of great novels in this list.

Noah Lukeman is the author of The First Five Pages: A Writer’s Guide to Staying Out of the Rejection Pile. Noah knows a thing of two about finding top-notch manuscripts to represent. And he presents his advice simply and succinctly, using lots of examples to illustrate his points.

Favourite historical fiction authors from three different surveys are presented in this post.

Two articles on historical research written by Leah Klocek attracted a lot of interest from authors .. part one and part two.

Happy reading. I hope you find many of these interesting.

At #HNS2019 I attended In For the Long Haul: The Craft of Writing a Series. This panel was moderated by Donna Russo Morin (great job, Donna!) with Nancy Bilyeau, Patricia Bracewell, and Anne Easter Smith as contributors. The session was designed to “weigh the pros and cons of writing a series and look at the decisions necessary in the earliest planning stages and beyond.” So let’s see what these wonderful writers had to say.

At the beginning the moderator made two clarifications: (1) a trilogy involves three novels with a tight connect of time, theme, character and sometimes location; (2) a series often involves one main character and is often based on a series of mysteries. As the session began, Donna asked each author to give some general comments on their series.

Patricia Bracewell: has written a trilogy based on the life of Emma of Normandy, England’s twice-crowned queen, which sprang from her life-long fascination with all things medieval. In her novels Pat attempts to re-create Emma’s early medieval world for readers as well as introduce them to this little known queen who has slipped into the footnotes of history. She feels that the same theme(s) will often run through a series/trilogy. For example, family, loyalty, duty. Such themes connect readers to their current lives and circumstances. However, conflicts vary from book to book to make the entire series more interesting.

Anne Easter Smith: her series based on the York family during the War of the Roses deals with different characters and could be considered a family saga. Each book is complete on its own and yet together they give an in-depth look at one of the two families whose viable claim to the throne threw England into civil war. Themes of morality, love vs. lust, duty, family, and loyalty are explored. Anne gave each protagonist a different skill – such as a musical instrument or a love of reading – that allowed exploration of something unique to that time period to enhance the story.

Donna Russo Morin has written a series telling the story of a secret society of women artists, under the tutelage of Leonardo da Vinci, who must navigate the treacherous life of 15th century Florence while trying to bring their artistry to the world.

Nancy Bilyeau’s series begins with The Crown where an aristocratic young nun – Joanna Stafford – must find a legendary crown in order to save her father—and preserve the Catholic faith from Cromwell’s ruthless terror. Subsequent novels continue Joanna’s story.

The group moved on to the pros and cons of writing series:

Then there was a discussion about having an overarching storyline or book-specific storylines:

Words of wisdom if you are considering writing a series or trilogy.

The first post I wrote about #HNS2019 is The State of Historical Fiction through the eyes of agents and editors. 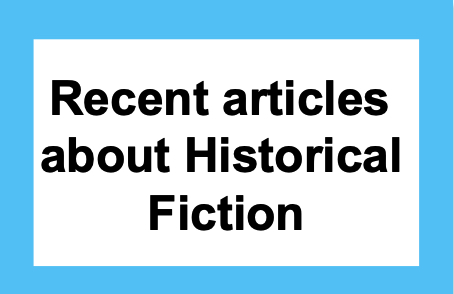 I thought I’d take a look via Google at what others are saying about historical fiction.

First up – a list from Read It Forward of Historical Fiction We Can’t Wait to Read in 2019 and written by Keith Rice, freelance writer and editor @Keith_Rice1. By the way, there are many other lists of interesting historical fiction for 2019.

In Why Are We Living in a Golden Age of Historical Fiction?, Megan O’Grady writes: “As visions of the future increasingly fail in the face of our present moment, literary authors are increasingly looking back, not to comfort us with a sense of known past, or even an easy allegory of the present, but instead — motivated by a kind of clue-gathering — to seek reasons for why we are the way we are and how we got here, and at what point the train began to derail.” She has a lot more to say than this one quote and I encourage you to read the full article.

In Read Brightly, tagline Raise Kids Who Love to Read, Ellen Klages writes Why Historical Fiction is Important for 21st Century Kids … “I think it’s important for kids to be aware that the past was often less than savory, that they learn about what actually happened, not what some would like to pretend it was like.”

Why is Holocaust Fiction Still So Popular? Writing in Haaretz, a leading Israeli newspaper, Emily Burack tackles this topic. She says: “I came to understand that Holocaust fiction remains popular for four key reasons: a mix of who is telling the story (the third and fourth generations), the types of stories (not straightforward, but morally ambiguous), the historical truth at the heart of all these novels and our current political moment.”

Historical Fiction – How, What, When and Why … this article appears on a site called Writers & Artists – The Insider Guide to the Media. The article, written by members of Triskele Books, includes top research tips, visual approaches, inspiration, and reliving the past.

The Walter Scott Prize for 2019 Shortlist is out … the shortlisted novels include The Long Take by Robin Robertson, Warlight by Michael Ondaatje, Now We Shall Be Entirely Free by Andrew Miller, The Western Wind by Samantha Harvey, After The Party by Cressida Connolly and A Long Way From Home by Peter Carey.