For 6 years, I’ve chronicled the books I’ve read offering a summary and my own rating scheme to identify favourite reads, non-fiction read for research purposes, light reads, and so on. This year’s reading was a little muddled — I’m not even sure I can find them all — so I thought I would take a different approach and highlight a few books that stand out and why.

The group includes two non-fiction, four novels about the Kennedy family and a wide range of time periods.

Indian in the Cabinet by Jody Wilson-Raybould ~~ Jody Wilson-Raybould was Canada’s Attorney General and Minister of Justice for almost four years and a member of Liberal Leader Justin Trudeau’s cabinet. Being a woman in this role is impressive enough, being an indigenous woman is uniquely impressive. This memoir offers great insights into the indigenous experience as well as their hopes for a new sovereign relationship between our First Nations people and the Government of Canada. It is very critical of the way politics runs in today’s Canadian government.

Between Two Kingdoms by Suleika Jaouad ~~ a powerful and inspiring memoir of a young woman who was diagnosed with leukaemia at the age of 22, battled cancer for three years, and then had to find her way back to a life without cancer. Suleika Jaouad inspired many with her blog Life Interrupted and her columns in the New York Times.

Red Widow by Alma Katsu ~~ I attended Alma Katsu’s workshop on conflict at the 2021 Historical Novel Society Conference – titled Upping the Ante. Impressed by Alma’s ideas, I read her recent novel Red Widow to see conflict in action. Trust me, she knows what she’s talking about. It’s a novel I frequently recommend.

The Rose Code by Kate Quinn ~~ I’m a fan of the women who worked at Bletchley Park during WWII. Kate Quinn’s latest dual-timeline novel is a wonderful page-turner.

The Other Einstein by Marie Benedict ~~ I discovered Marie Benedict’s novels with The Other Einstein. Benedict has a knack for writing about the lives of unique women of history. Who knew that Albert Einstein’s wife – Mitza Maric – was an incredibly clever scientist and mathematician in her own right and whose contribution to the special theory of relativity is hotly debated?

The Personal Librarian by Marie Benedict and Victoria Christopher Murray ~~ The true story of Belle da Costa Greene, J. P. Morgan’s personal librarian who helps him build a world-class library of rare manuscripts, books and artwork. Belle does all this while passing for white. And it’s seamlessly written by two authors!

Shadow on the Crown by Patricia Bracewell ~~ I stepped way back in time to read of fifteen-year-old Emma of Normandy who crosses the English Channel in 1002 to wed the much older King Athelred of England, whom she meets for the first time at the church door. Fascinating story, and guess what? It’s book one of a trilogy.

One of the panels I moderated during the June HNS conference was on writing about the Kennedy family and the challenges of doing so. I decided to read all the novels these panelists featured: The Summer I met Jack by Michelle Gable; Jackie and Maria by Gill Paul; The Editor by Steven Rowley; The Kennedy Debutante by Kerri Mahon. I can enthusiastically recommend each one of them.

The Island of Sea Women by Lisa See ~~ Lisa See was guest of honour at the 2021 HNS conference. Since I’d only read her novel Snow Flower and the Secret Fan, I decided to read her latest. Powerful prose and a unique story about Korea.

Drake: Tudor Corsair by Tony Riches; Essex: Tudor Rebel by Tony Riches ~~ Tony Riches has made the Tudors his specialty. These two novels are from his new Elizabethan series about the men who served the Queen in unique ways.

The Sea Gate by Jane Johnson ~~ another wonderful dual-timeline novel by Jane Johnson. This one is set in Cornwall which makes it special as I’ve been to several of the places mentioned. And it features a foul-mouthed parrot!

Birds Eye View by Elinor Florence ~~ the heroine of this story joins the British Women’s Auxiliary Air Force as an aerial photographic interpreter, someone who spies on the enemy from the sky, watching the war unfold through her magnifying glass. The author does a wonderful job of explaining the technology involved in this little known aspect of WWII in a way that is easily understood and of presenting a great story featuring women who served in the war.

M.K. Tod writes historical fiction. Her latest novel, PARIS IN RUINS, is available for pre-order on Amazon US, Amazon Canada, Kobo, and Barnes&Noble. An earlier novel, TIME AND REGRET was published by Lake Union. Mary’s other novels, LIES TOLD IN SILENCE and UNRAVELLED are available from Amazon, Nook, Kobo, Google Play and iTunes. She can be contacted on Facebook, Twitter and Goodreads or on her website www.mktod.com. 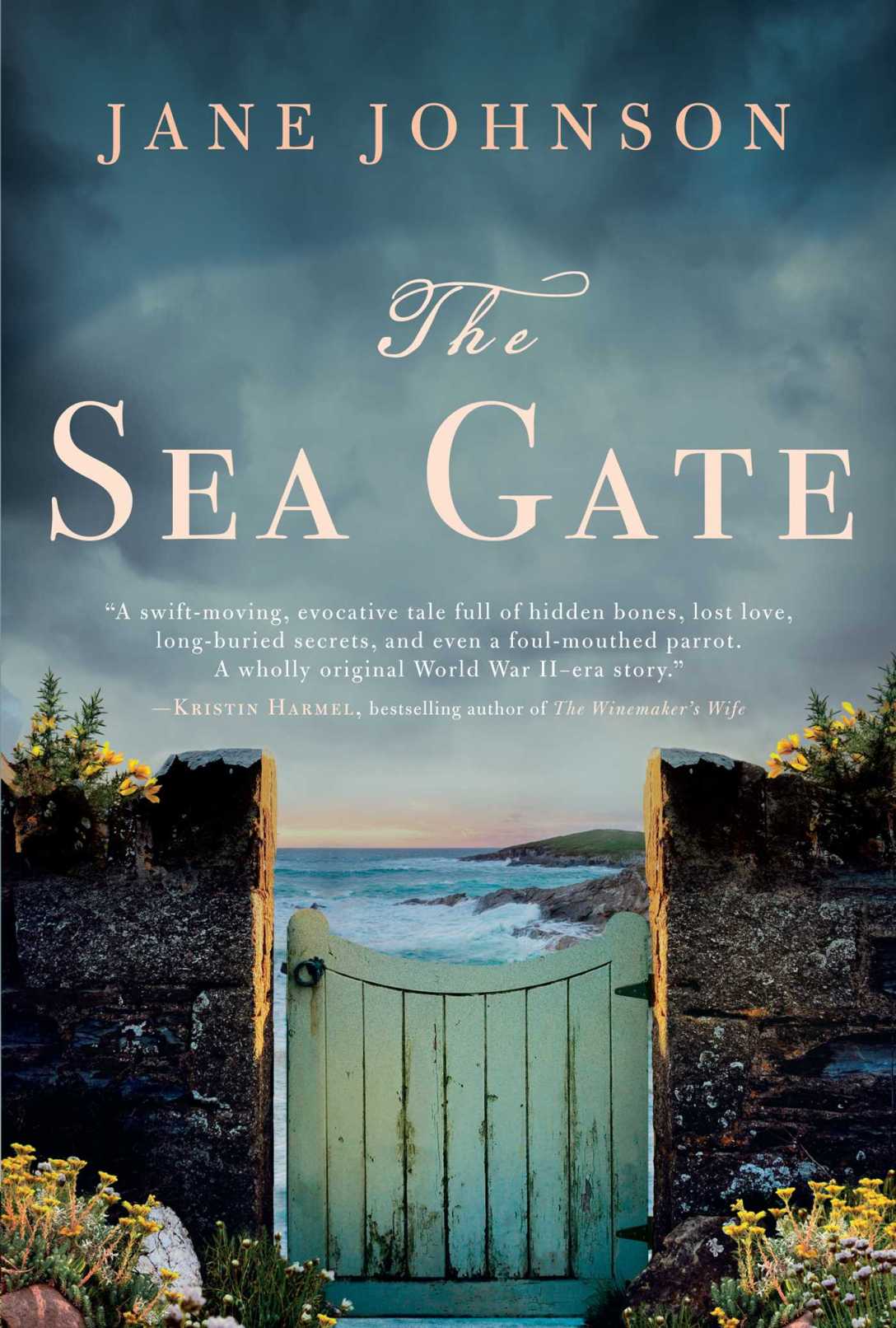 The Sea Gate by Jane Johnson is a wonderful story with the perfect blend of present-day and past and a compelling cast of characters featuring the frail but crusty Olivia–I picture Maggie Smith or Judi Dench in the role–and the lovely Becky who is trying to get her life in order.

There are broken families, a house with a hidden passage to the sea, a scheming family intent on fraud, and a long-ago murder or was it merely a disappearance? As the book description says: an entrancing tale of love and courage.

Throughout, Jane Johnson ratchets up the suspense chapter by chapter culminating in a very satisfying ending. I recommend it highly!

Most of the story is set in Cornwall in a house called Chynalls. Chynalls is almost its own character in the book. Where did you get the inspiration for it?
Jane: Chynalls was inspired by a number of houses I’ve known over the years. There was my grandmother’s house, which was rambling and rather decrepit, and made strange noises at night (including the sound of a brass doorknob turning where for years there had been no door

); and my great-aunt’s house, from which I stole the scullery, with its channel to wick away water – or maybe blood; and the spider-infested outdoor privy; and one of the houses I grew up in down in a remote spot on the south coast had a tunnel that ran from the cellars to the shingle beach and was locally known as a smugglers’ passage. The ‘sea gate’ itself I spotted in a local village – I lived in the area of West Penwith, in the far tip of Cornwall, where the novel is set.

Unique and relatable characters are one of Jane Johnson’s strengths. I asked her whether any of the characters in The Sea Gate inspired by real people she knows.
Jane: Not directly, but the idea for the novel came initially from conversations with my mother, who was around the same age as Olivia when the war broke out, and she spent some of those years down here in Cornwall, before going up to London to work. My mother, though, did not have an artistic bone in her body, unlike Olivia, whose paintings made her semi-famous. My mother, on the other hand, when engaging in a Christmas game of ‘Pic-Charades’, in which you have to draw for your game-partner the word on the card, managed to bamboozle me completely by giving a duck 4 legs…
Several of the old folk in the village where I live offered me their recollections of life here during the war and I felt it was important to honour their memories and that remarkable generation. They have – including my mother – all passed now. I mourn them, but am so glad I managed to write some of their experiences into the book.

What was the most difficult part of the artistic process for this book?
Jane: I think the fact that it’s set where I live gave me pause to begin with, especially since some of the events are within living memory for some of the very oldest inhabitants. I didn’t want anyone reading it and complaining that the farmer’s wife wasn’t dead and that he didn’t have a daughter with special needs, or that their father definitely did not hoard butter etc… So instead of calling the village Mousehole, I called it by its old Cornish name of Porth Enys – the Island Port: and that gave me the creative distance I needed to free me to write the story I wanted to write.

Were the WWII incidents and circumstances influenced by what really happened in Cornwall during that war?
Jane: Yes, I used actual incidents and well researched circumstances – the bombing of Penzance, the crash of a German warplane into farm fields, the stationing of internees and POWs at the local farm to carry out the farmwork for the war effort, the pelting with rotten vegetables of French refugees when they docked at Falmouth, the trawlers lost to mines and submarine attacks; the coast dotted with lookout posts and barb-wired off from civilians; the general sense of paranoia about strangers. It was fascinating to do the research and learn more about the region I live in, and enormous fun to write such recent history for once: it’s the first time I’ve written anything so modern, and I thoroughly enjoyed it. My next novel – THE WHITE HARE – is set in a remote valley in Cornwall in 1954. I’m about two-thirds of the way through and the end is in sight!

The Seat Gate by Jane Johnson ~~ A broken family, a house of secrets—an entrancing tale of love and courage set during the Second World War.

After Rebecca’s mother dies, she must sort through her empty flat and come to terms with her loss. As she goes through her mother’s mail, she finds a handwritten envelope. In it is a letter that will change her life forever.

Olivia, her mother’s elderly cousin, needs help to save her beloved home. Rebecca immediately goes to visit Olivia in Cornwall only to find a house full of secrets—treasures in the attic and a mysterious tunnel leading from the cellar to the sea, and Olivia, nowhere to be found.

As it turns out, the old woman is stuck in hospital with no hope of being discharged until her house is made habitable again. Rebecca sets to work restoring the home to its former glory, but as she peels back the layers of paint and grime, she uncovers even more buried secrets—secrets from a time when the Second World War was raging, when Olivia was a young woman, and when both romance and danger lurked around every corner…