Henry is on leave at last!

A line to inform you of my arrival in this well known town, where I propose spending the rest of my leave. The train journey up from Durban takes 24 hours and takes you through fine looking country. In Natal we passed through many of the battlefields of the Boer War, Ladysmith, Glencoe, Elandslaagte, Majuba, &c., which are now all peaceful pasture lands. The approach to Jo’burg is like coming into any mining town, except that the slag heaps are white instead of black. These are the gold mines, of which I had no idea there were so many. I am going to try to get down one of them and will let you know more about them.

This photo shows the Grand National Hotel around 1893. Source: Wikimedia 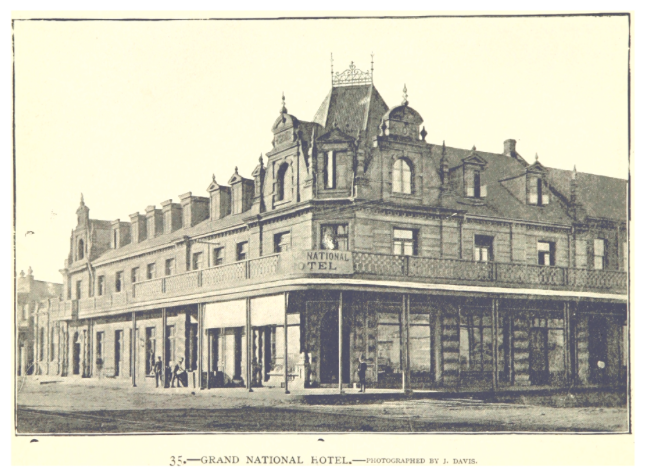 We are very high up here and the climate much cooler than at the coast, with the result that I had a recurrence of the fever and had to spend a few valuable days in bed. It is a fine up-to-date town with palatial buildings and offices. Khaki is conspicuous by its absence … The old racial question is still in evidence, British and Boer, very much like the Irish question at home. We have been made honorary members of the Rand Club, which is a very swell place and apparently in complete ignorance that there is a war going on. I enclose a photograph taken in “German” East which I have just discovered among my possessions.

I found this map on Pinterest – original source isn’t shown. It shows the colonization of Africa by European countries as at 1914.

Last time I was out with a patrol we were ambushed less than a mile from camp and how they did not “scupper” the lot of us I don’t know. [I’m sure his mother was happy to read that!] At the first crack we dropped in our tracks, flat, and as we were in extended order there was not much for him to pot at. I got my askaris to return the fire by volleys and it was not long before we silenced them. They were on both sides of my track but made no attempt to close on me. I caught a glimpse of a couple  of a couple of them scuttling away for dear life and had a parting shot at them. I had one man hit in the shoulder and sent him back to camp with an escort of one. I followed up on our attackers and came on their lair, and what should I find but a perfectly good British made rain coat, which the officer in charge must have left in his hurry. There is no doubt that at one time it belonged to one of our fellows.

I continued my patrol, the object of which was to reconnoitre a small conical hill in the enemy territory and where I was to spend the night. The hill is quite a landmark and known to be well patrolled by the enemy. We had no further “bumps” and when night fell we made ourselves as comfortable as possible occupying the slope facing both their country and ours. I cannot say I slept very well in the middle of my little band of a dozen, with a sentry up of one in three. It was not so much the enemy as the wild beasts I was thinking of, and they were there all right. We found we could hear something or other throughout the night sniffing around and we were all a bit scared that a lion would snatch up one of us and vanish, which is a habit they have. I was quite glad when 5 a.m. came (stand to hour at camp) when I was to send up a Very light as a signal and return.

I have been learning something of the battalion’s doings in the earlier stages of the campaign and they have had a pretty thin time. Our last C.O. (Colonel Edwards) was killed in a recent action, and apparently he is sadly missed. I have just met our new C.O. (Lathom) and Irishman and a cheery sort of bloke. He is at the next post with half the battalion and I have just been escorting a full blown general to there by motor car. Poor Wilson our water expert and engineer, was killed the other day doing the same trip. His car was held up by a rope stretched across the track and he and his orderly were shot. A note was pinned on his chest “regretting the necessity of such action”. There have been several similar mishaps. His job was to advise and report on the various water supplies in our territory, which took him about a good deal.

I have had my first bout of fever and it was pretty severe while it lasted, but I was well looked after by the doctor who told me I was babbling quite a lot in my sleep. Our camp is very busy now and there is every sign of a resumption of active operations. A battalion of South African Infantry have arrived and some Indian units and there is quite a babel of tongues – English, Dutch, Hindustani and Swahili.

I wonder when I will get a letter from you and live in hopes.

Wild animals, jungle fevers, and enemy fire! So much for Henry and his family to worry about. 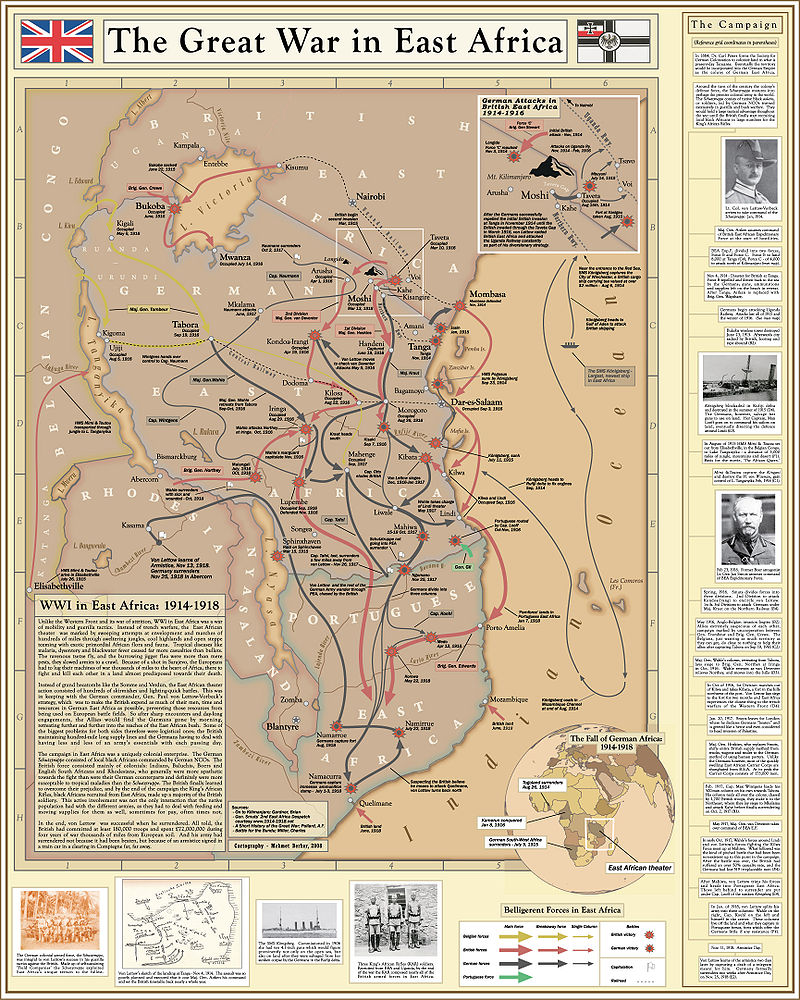 Henry sees a bit of action while travelling to his battalion’s destination.

My last was by p.c. from Mombasa on 1st May and I have now joined my battalion in the field, or rather my company which has been detached from the main body and is encamped on a water-hole somewhere in the middle of Africa. In company with half-a-dozen other officers destined for their respective units in the field, I left Mombasa on a British India boat. There were also a draft of askaris and about 1000 native porters, to be distributed to different battalions.

We disembarked at the port of Kilwa, which is well down the German coast, on the 5th inst. [May 5th, I think]. The port is just a big inlet the northern shore of which is in our territory, while the Germans still hold the S. shore, and the units and stores were landed by lighters. There were 4 other of our ships there and that same morning, to the surprise and consternation of the local garrison, our shipping was shelled by a gun from a cruiser which they had run aground in one of the rivers to avoid capture and this they had dragged up through the bush to a point opposite Kilwa and had a pot at our ships. They had four hits out of thirty shots and no great damage was done. We hadn’t a gun about the place to return the fire, but a message to Zanzibar where we have a naval base, brought forth a monitor and a couple of small gun boats which arrived on the spot soon after we did. They proceeded to bombard the spot whence came the shots, but of course by this time the Germans had made off with their precious gun into the blue.

The map below shows a timeline for the Africa campaign. Red arrows are British movements, black arrows are German. You can see that the British made continuous gains on German positions. You can also see Kilwa, where Henry landed, on the southern coast. I found a summary of Germany’s objectives and the major battles that occurred on Wikipedia.

We landed later in the day and camped for the night not far from the landing stage. We were up betimes next morning ready for our march inland. Each one of our little party required 8 porters which made quite a “safari” by itself. This being the rainy season it rained, as it can only in Africa, and the going was heavy. Our first stage was to Kilwa Kiswani [I found this spelled Kisiwani] about 20 miles and still on the coast. We halted at midday for food and rest and let our clothes dry on the bushes in the sun, which had reappeared. We reached K.K. about sundown.

The Germans have been very active in this neighbourhood, as this corner of the country is all that is left to them, and they are trying to reestablish themselves on the coast. This is a sort of base with a hospital and here we were reinforced with a further batch of porters and a few details of my own battalion, who had been in hospital.

Native porters are our only means of transport in these parts and they make regular safaris from the coast along our lines of communication inland with a strong escort. These convoys snaking along through the bush and miles in length are of course very vulnerable and are not infrequently raided by strong enemy patrols and a lot of our valuable stores go west. [I assume he means into German hands.]

There was a road of sorts but the rains had made an awful mess of it and the porters, with their 60 pound loads on their heads, had a very thin time of it. [today we might say had a hard time of it] We had an escort of Pathans (Capt. Bonham-Carter) who formed the advance guard and flankers and I was in charge of the read guard of K.A.R., being the senior man of our lot, and was about half-a-day’s march behind the head of the line! We were three days on the march, bivouacking two nights, which brought us to our camp at Mnasi, where I am at present.

I find it difficult to understand the strategies deployed by the British and German generals in this part of WWI. From the little I’ve read, it seems that the German general von Lettow abandoned formal military tactics in 1916 in favour of guerrilla tactics and fought the remainder of the conflict in that manner. If you’re interested, I discovered a PhD thesis written by Ross Anderson of the University of Glasgow titled World War I in East Africa: 1916 to 1918. Below is a brief paragraph.

Planning for the Dry Season Offensive in 1917

“The halt imposed by the rains also provided an opportunity to formulate the operational plans for the dry season of 1917 which would not begin before late June. The difficulties of trying to advance and sustain operations across the Mgeti and Rufiji rivers had already been amply demonstrated. Fighting at the end of elongated lines of communication in primeval jungle magnified the British weakness in transport while giving few tangible advantages in return. However, by using Kilwa as a base of operations, [where Henry landed] the British could use their maritime supremacy to much better advantage while also shortening the overland supply lines. Movement by ship also made possible the rapid and large scale redeployment of troops, if only along the littoral [a coastal region – I had to look that up!].”