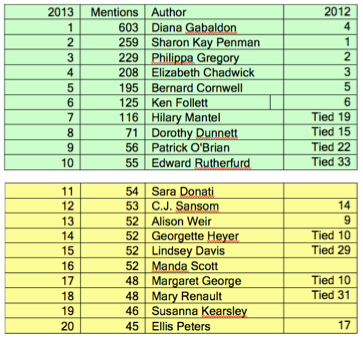 Of 2440 survey participants, 2075 people responded with one, two or three favourite authors. And a total of 1017 different authors were mentioned as favourites.

Trust me, that’s a lot of data to sort through particularly when you think of misspellings, use of initials or not, given name or surname written first! Names like Philippa, Iggulden and McCullough have many spellings – just to mention a few! And then I had to count them – well, actually, Excel counted them for me after my son-in-law showed me how to use the ‘countifs’ feature. Grateful thanks go out to him. 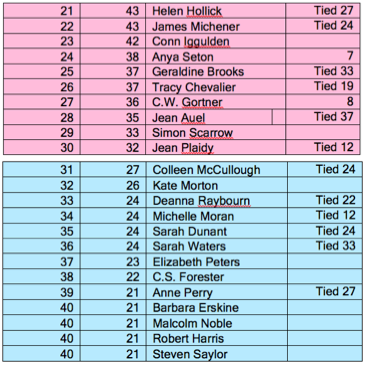 You will notice that we have 43 authors since five authors all had 21 mentions. A HUGE round of applause for these favourite authors.

Caveats: as I pointed out in the main report, the survey was initially publicized through the Historical Novel Society, a number of book review bloggers and my own efforts on Facebook and Twitter. From those original sources people then passed the survey link along all around the world. After about a week, in an effort to continue spreading the word, I posted on the Facebook pages of the 2012 top ten authors. As you can see from the results, Diana Gabaldon’s fans are incredibly enthusiastic about her writing and they came out in droves to vote!

Is the methodology statistically accurate?

As I mentioned in the main survey report, I am not a statistician and I’m sure some will argue that the results are skewed based on how those responding heard about it. But don’t forget, 2075 took the time to offer the names of their favourite authors.

Let me repeat what I said earlier in this post, a huge round of applause for these terrific authors.

Do men and women have different favourites? Is geography or age a factor in choosing favourite authors? Does it make a difference if you’ve recently released a new novel? I’ll return with some thoughts on these and other aspects when time permits.

Comments welcome as well as any thoughts on further analysis and the popularity of these authors.

P.S. For a look at gender differences in favourite authors, check here.

M.K. Tod writes historical fiction and blogs about all aspects of the genre at A Writer of History. Her debut novel, UNRAVELLED: Two wars. Two affairs. One marriage. is available in paperback from Amazon (US, Canada and elsewhere), and in e-book formats from Amazon, Nook, Kobo, Google Play and on iTunes.

You probably won’t know her as Eleanor Hibbert, instead you’ll know her as Philippa Carr, Victoria Holt or Jean Plaidy or one of the other pseudonyms she used, including her maiden name Eleanor Burford. As Jean Plaidy, she was selected as one the top 20 favourite historical fiction authors in last year’s survey.

How did Eleanor Hibbert begin her writing career? Did it take off immediately or did she experience a difficult start with rejections from agents and publishers?    Eleanor Hibbert started her literary career in the 1930s by emulating her literary heroes—Charles Dickens, George Eliot, and the Brontë sisters. She wrote nine long novels that were psychological studies of contemporary life. Publishers rejected all nine, so she turned to writing stories for London newspapers. It was the literary editor of the Daily Mail who advised Hibbert to forget about “serious fiction” and write something sellable, such as romantic fiction. Unfamiliar with the genre, Hibbert proceeded to read fifty romance novels! Daughter of Anna, her first published novel, came out in 1941 under the name Eleanor Burford, her maiden name. She continued to use this pseudonym into the 1960s as she wrote thirty more contemporary romance novels.

Hibbert loved history, and during the Second World War, when she and her husband were living in Cornwall near a scenic beach named Plaidy, she wrote her first historical novel under the pen name Jean Plaidy. Her first attempt at historical fiction was not a success, but once again she persisted, writing four crime novels under the pen name Elbur Ford, historical-crime novels under the pseudonym Kathleen Kellow, and five historical novels as Ellalice Tate. (The five Tate novels were later republished under the Plaidy pseudonym.) But in 1958, she published the second Jean Plaidy novel, and after that she was unstoppable, writing over one hundred more historical novels about the crowned heads of Europe.

While the Jean Plaidy novels made Hibbert a bestselling author in Great Britain, it wasn’t until 1960 that she became an international bestselling author with her first Gothic romance, Mistress of Mellyn, written under a new pseudonym, Victoria Holt. Readers thought Victoria Holt was a pseudonym for Daphne du Maurier because the novel’s atmosphere was so similar to that of Rebecca. Hibbert had shrewdly studied the market and determined that there was a wide readership for historical romantic suspense stories set in gloomy manor houses. She was right. Victoria Holt proved to be the most financially rewarding of her pseudonyms, and the one for which she was best known in the United States.

In 1972, Hibbert created her last pseudonym, Philippa Carr, returning to the subject she seemed to love best, English history, with her ambitious Daughters of England series. Beginning at the time of the Reformation with The Miracle at St. Bruno’s and ending in the final years of the Second World War with We’ll Meet Again, the series leads readers through the pageant of English history with fast-paced, suspenseful novels that also feature romance and dramatic historical episodes.

How many books did she write in total?    Eleanor Hibbert wrote over 200 novels and sold more than 100 million copies of her novels by the time she died in 1993.

Hibbert was clearly very skilled at writing historical fiction. What ingredients made her so successful?    Born and raised in London, Eleanor Hibbert grew up fascinated with the city and its 2000 years of history. She loved to explore London and she seemed to love to read as much as she loved to write. From the bibliographies in her Plaidy novels, we see that she researched her subjects extensively. She was well read in English and French political and social history as well as in biographies of prominent historical figures. I think she was so skillful at writing historical fiction because she studied a particular historical period and the major players of the time and formed her own opinions of their motivations, which she then conveyed in a realistic, dramatic narrative imbued with the colorful atmosphere of the era. The Jean Plaidy historical novels were popular among readers, yet they also received critical acclaim for their historical accuracy, authentic detail, and quality of writing.

What techniques did Eleanor Hibbert employ to write productively?    Hibbert was a force of nature. She wrote for five hours a day seven days a week, starting at 7:30 A.M. and completing approximately 5,000 words by lunchtime! She enjoyed taking two-month cruises in the winter, but she never left home without her typewriter because she said she felt miserable if she took so much as a week’s break from writing.

Hibbert wrote under different pseudonyms because she wrote different types of fiction for different audiences. Although she was a versatile writer, perhaps she suspected that readers of her Jean Plaidy novels, whose plots rarely strayed beyond historical facts and which were written in third person narration, wouldn’t enjoy her more heavily plotted, romantic, and suspenseful Victoria Holt and Philippa Carr novels, which were written in the more intimate first-person narrative voice. And no doubt her publishers wanted to market her novels to clearly defined audiences. Many of her readers never suspected her multiple identities.

What strategies guided Hibberts’ writing career?    Persistence, paying attention to the market, writing about what fascinated her—English and European history—and consistently delivering high-quality novels to her legion of fans. I suspect that Eleanor Hibbert would advise writers of historical fiction to write about the period or periods they wish they could have lived in and to understand their characters’ motives. This type of insight enables a writer to make the characters come alive on the page.

Why has Open Road Media chosen Hibbert’s Daughters of England series for digital publication?    It is such an outstanding series of historical novels with an irresistible premise. With the Daughters of England novels, a reader can easily absorb the major currents of four hundred years of English history and experience the exciting dramas and conflicts of a significant period through the eyes of a woman of the time, one of the descendants of Damask Farland, the charismatic heroine of The Miracle of St. Bruno’s. The novels simultaneously entertain and educate, offering the reader the authoritative, authentic historical detail of a Jean Plaidy novel coupled with the suspenseful story line and intimate tone of a Victoria Holt novel. No doubt with her great love of history, Eleanor Hibbert was gratified to learn, shortly before her death in 1993, that each of the Daughters of England novels was borrowed approximately 300,000 times a year at British libraries, making Philippa Carr one of the 100 most requested authors.

Many thanks, Maggie Crawford, for providing these interesting insights into Eleanor Hibbert’s life. Like many others, I spent hours curled up with her stories being immersed in time and place as great historical events unfolded. I wish Open Road great success with the digital release of Daughters of England.

Some time ago, Larissa MacFarquhar wrote about Hilary Mantel in The New Yorker. What struck me at the time is the notion that Mantel doesn’t “believe in inventing greatness where none exists” and “feels she can write about greatness only in historical moments that have already proved ripe for its flourishing. She believes that there are no great characters without a great time; ordinary times breed ordinary people”. Mantel implies that our present times are ordinary not great.

Does the favourite authors list from my survey imply that readers like to read about great times? Let’s have a look.

My conclusion is that readers enjoy reading about greatness and great times. What do you think?