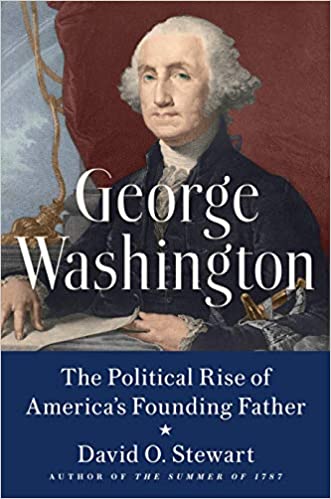 David O. Stewart has been on the blog before in connection with his novel The Paris Deception. However, David is also an author of several non-fiction works written after many years as a trial and appellate lawyer.  His award-winning histories have explored the writing of the Constitution, the gifts of James Madison, the outrageous western expedition and treason trial of the mysterious Aaron Burr, and the impeachment trial of President Andrew Johnson. David’s most recent book is George Washington: The Political Rise of America’s Founding Father, which he refers to as ‘Washington as You Haven’t Known Him.’

Over to you, David.

Five years ago, I set out to unpack how this third son of a second-rank Virginia planter became the dominant force in the founding of the world’s longest-lived constitutional republic.

Washington’s rise was a bold reinvention. In his midtwenties, he had scuttled a promising military career with brash words and intemperate conduct. Twenty years later, that headstrong young man had morphed into the nation’s indispensable founder.

The book explores Washington’s dramatic transformation. Through sixteen years in Virginia’s House of Burgesses, Washington learned about positioning, maneuver, compromise, and leadership.  Serving on the Fairfax County Court and his parish vestry, he learned about serving the public.  Those lessons allowed him to be a matchless leader  and unifier of the new republic.

Library Journal: “In this lively and admirable study, Stewart offers a balanced and thoughtfully well-written appreciation of George Washington’s life and leadership.”  “A must for fans of biographies.”

Booklist: “Stewart addresses the political aptitude of the Father of the Nation. . . [in this] readable and revealing contemporary look” at George Washington.

Sounds like a must read for many of us.

George Washington: The Political Rise of America’s Founding Father is available in print, ebook, and audio editions from Bookshop, Amazon, Barnes & Noble, and from your local independent bookstore.