I’m having some wonderful guest posts these days and today is no different. Ryan von Ruben and Caroline Vermalle have written about the inspiration for their novel A Flower for the Queen. It’s truly intriguing how writers find their stories, sometimes a small, unexpected event, at other times a lifelong passion. Many thanks to Ryan and Caroline for guest posting at A Writer of History. 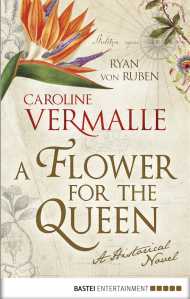 There is an interesting “story behind the story” for our new novel “A Flower for the Queen.” In fact, it can be found on page 151 of the paperback edition of Bill Bryson’s A Walk in the Woods. There, Bryson touched on the trials and tribulations of early American plant hunters. We have all heard and read about the Gold Rush, but who knew there had been, from the 17th to the 19th century, a Flower Rush?

So we were first attracted by the theme, then set out to look for a real hero to carry what we wanted to be an old-fashioned swashbuckling adventure story. We went through an endless list of potentially suitable figures but somehow, either by noble birth or by gift of fortune, they were all too distinguished, too readily destined for greatness.

But then, lost in the pantheon of great plant hunters, we came across a fellow named Francis Masson. Neither a botanist nor a gentleman, here was a man who was not even a fully-fledged gardener, but a simple under-gardener who had never left the shores of his native Britain before sailing to the southern tip of Africa on a flower-hunting expedition, spectacularly under-qualified for the job.

He was too old, too awkward, too poor, and by all accounts was one of the unluckiest men to have graced the pages of history. And yet, against all odds, he managed to enrich London’s Kew Gardens with 1,500 new species of plants found in some of the remotest, most inhospitable places in the world.

His plant collecting also placed him at the center of a titanic struggle for control of the Cape of Good Hope and the lucrative trade routes to the East that went with it. Caught between the British, whose naval power was in the ascendancy, and the reviled Dutch East India Company, Masson’s arrival and subsequent role as a reluctant spy for the British added even more drama to an already breath-taking tale.

But what is even more astounding is that despite the importance of Masson’s contribution, almost nothing was written about or by him during his lifetime. So who was he and what drove him onward?

Francis Masson’s own story is a tale that will always be shrouded in mystery and half-truths. In the gaps left by the few facts that remain, “A Flower for the Queen” wonders what might have been and guesses at how a most ordinary man came to live the most extraordinary of adventures.

Caroline Vermalle was born 1973 in Picardy in northern France. After studying film sciences in London she made documentaries for the BBC. In 2007 she returned to France and published her first novel “For happiness is a journey” a year later which was highly praised from the press and awarded the “Prix de Littérature Chronos 2011” and “Nouveau Talent 2009”.

Ryan von Ruben: Ryan von Ruben was born in 1974 in Johannesburg, South Africa, where he spent most of his childhood. After studying architecture in London, he worked for several years as an interior designer, before he settled in Vendée (France). He is married to the writer Caroline Vermalle, with whom he has a son. A Flower for the Queen is their first joint novel project, inspired by Ryan von Ruben’s South African roots.

SYNOPSIS OF “A FLOWER FOR THE QUEEN”

England, 1770. Young gardener Francis Masson is asked by the King to search for a rare orange blossom in South Africa. As his ship departs, Mason has no idea that he’s about to embark on the adventure of a lifetime. During his hunt for the mysterious flower, he doesn’t anticipate the untamed nature of the African continent, nor the subtle scheming of competing plant hunters. As he makes the acquaintance of eccentric botanist Carl Thunberg and his elegant accompaniment, Masson’s fate once again takes an unexpected turn … A lively adventure novel set against the vibrant backdrop of the South African countryside.