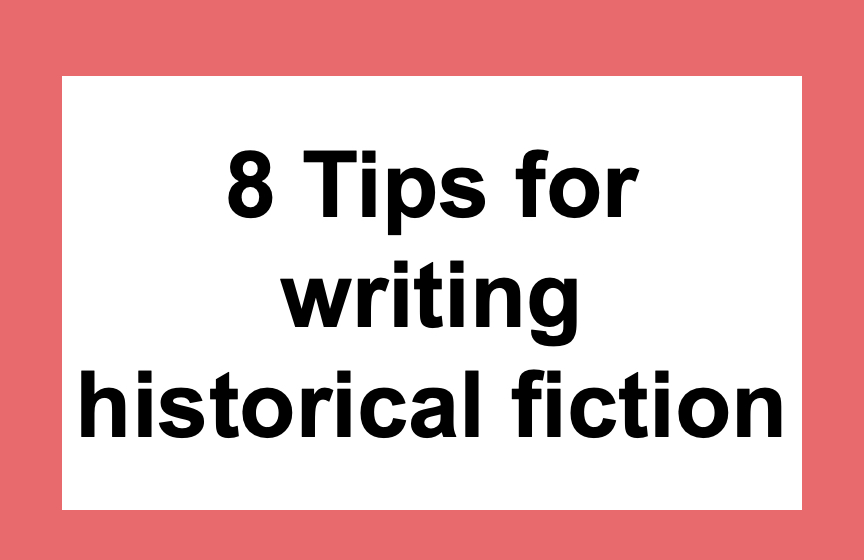 During 2019, A Writer of History had the good fortune of securing many guest authors to discuss a range of topics related to historical fiction. Below are 8 tips that stand out for me.

Historical fiction, in its very essence, is a way of falling together in time—a story is set in the past, but it is being written from the present, so, for me, the process of writing such a story is in itself a synchronizing of different times.

Mary F. Burns, author of The Love for Three Oranges

In Keeping Historical Figures Real, Mary Sheeran discusses how to weave real historical figures into your novels. She says that:

“we can’t just report; all characters need to drive the story and have something of the writer in them.

A Surgeon’s Advice … on how to Write Books with Andrew Lam:

Writers must choose topics that matter to people. Stories that center on a controversial topic, an important historical event, or a way to help others improve their lives are all more likely to succeed. If your book isn’t about something important, it won’t be important to readers. Make sure it matters.

Marc Graham whose novel Song of Songs is about the legendary Queen of Sheba, writes of the challenges in going far back in time.

While it’s simply not possible to recreate these tales with certain accuracy, harnessing the best available resources (archaeology, linguistics, epigraphy) and cross-referencing the myths among different cultures can help us frame our stories in a realistic world.

In Writing the Stories of History’s Powerful Women, Judith Cromwell tells us that:

such writing requires meticulous research.  Research resembles a mixture of jigsaw puzzle and mystery.  The writer must identify clues, track each to its source, evaluate each within the context of the subject’s life and character.  Original research brings the thrill of unearthing new information.

Donna Baier Stein, author of Scenes From the Heartland, discusses using actual images as a basis for building a story in her post Turning Images into Tales:

as a fiction writer, my desire was not to capture the truth of the actual image (the way a photographer might want to do), but to imagine a potential story behind this scene.

Luke Jerod Kummer is the author of The Blue Period, a novel about Pablo Picasso. He writes about examining the works of Picasso in order to gain a deep understanding of his character:

when I sought to reconstruct the look and feel of where and how a maturing Picasso lived in Barcelona and Paris, or what his households, friends or lovers were like, there were  paintings, pastels and drawings allowing intimate glimpses both of his surroundings and what was going on inside him.

Elizabeth Bell’s guest post The Importance of Warts brings out the theme of creating characters and stories that don’t gloss over the warts of historical events, culture and social mores. She says:

As historical novelists, we are tour guides and teachers … We do [readers] an enormous disservice if we’ve whitewashed that truth… If we don’t make our readers think, if we don’t make them at least a little uncomfortable, we’re not doing our jobs.

Important lessons. I’ll have a few more for you next time.

Judith Lissauer Cromwell spent a successful corporate career on Wall Street before returning to academia as an independent historian and biographer of powerful women. She previously published Dorothea Lieven: A Russian Princess in London and Paris 1785-1857 and Florence Nightingale, Feminist, and now tells the real story of Queen Anne in her latest book, Good Queen Anne: Appraising the Life and Reign of the Last Stuart Monarch. Today she brings her perspective on the meticulous research involved in writing about these impressive women.

Writing the stories of history’s impressive women requires meticulous research.  Research resembles a mixture of jigsaw puzzle and mystery.  The writer must identify clues, track each to its source, evaluate each within the context of the subject’s life and character.  Original research brings the thrill of unearthing new information.

Research can vary.  To understand Russian Princess Dorothea Lieven, (1785-1856) who evolved from an unfulfilled young wife into a lover, confidante, and independent stateswoman, I traveled to Riga, her birthplace; to St. Petersburg, to see the palaces where Dorothea spent her youth, ascertain why she disliked living in Russia; to Paris, Lieven’s home for the last third of her life, location of her famous salon; and London, to examine, at the British Library, fifty-nine volumes of Dorothea’s letters, most of which had, until I read them, slept undisturbed.

Hundreds of biographies have been written about Florence Nightingale, (1820-1910) creator of modern hospital nursing, pioneer of public health.  My examination of her vast correspondence, located mostly in London, unearthed nuggets hitherto overlooked.  So did my visit to a stately house in the English countryside to explore the Nightingale family archives; yes, photo-copies of these letters are kept in one of London’s libraries, but I thought examination of the originals might prove worthwhile.  It did.

Queen Anne (1665-1714) posed an additional challenge.  Men who, until recently, wrote history, depicted the least known and most underrated of the few women who have reigned over England in their own right, as a dull-witted puppet manipulated by her ministers.  The acclaimed film “The Favorite” portrayed Anne as the pivot of a lesbian triangle, the prize two power-hungry females schemed to capture. Was she?

Anne Stuart’s story starts with a secret marriage — between her royal father and commoner mother; her birth a letdown due to her sex; plots aplenty; a stealthy midnight flight, persecution, ill-health; and seventeen pregnancies had failed to provide her country with an heir.  Then, a glorious reign.  For Queen Anne played a key role in the historic union of England and Scotland, which created Great Britain; in settling the Protestant Succession, which gave her nation stability; in the War of the Spanish Succession and Peace of Utrecht, which enabled the British Empire.

Anne had no education in, or experience of, statecraft.  But she grew up in a court notorious for depravity and deceit, a court where adders dangled from the trees, and alligators slithered underfoot.  That taught Anne valuable lessons.  During her reign, Anne’s small island nation off the coast of continental Europe rose from the chaos of regicide, civil war, and revolution to the brink of global supremacy mainly due to the men she chose to lead her army and government.

Resolved not to be a cipher for the Merciless Men of either the Whig or Tory party, deploring the discord of political warfare because it weakened her nation, Anne kept the crown independent and above faction by governing via Moderation, a balance between parties. That made her the unifying and stabilizing force in a divided country.

Neither brilliant, charismatic, nor beautiful, battling poor health and the contemporary notion that females were inferior to men, Anne’s pragmatism and strong sense of duty resulted in sound decisions, even brave ones.  She could easily have withdrawn from the Grand Alliance formed to fight France’s attempt to dominate Europe; instead, Anne became its leader, steadily backing her handpicked captain general, the Duke of Marlborough, against the counsel of several senior ministers.

Patriotism, piety, and a happy home life sustained Anne Stuart.  Her marriage to Prince George of Denmark had its genesis in geopolitics.  Yet, Anne’s “greatest blessing, on earth” was the “entire union of affections and inclinations, between her and her royal consort”; they were a “perfect pattern of conjugal love.”[i]

Bereft, in childhood, of close female relatives, surrounded by sycophants, later by spies, Anne yearned for a friend.  She found one in Sarah, Duchess of Marlborough.  The two ambitious young women were close.  Until fate made one of them queen.

That doomed the friendship.  Consequently, Sarah focused her multiple memoirs on disparaging the queen and justifying herself.  Since Sarah’s papers contained the fullest account of her long relationship with Anne, posterity got a picture of the queen as dimwitted and insincere, a feeble ruler incapable of independent thought, a mere pawn.

Personal bias is one of several — political, national, gender — that confronts the writer of history’s prominent women.  And these biases enhance the importance of careful research.  In addition to visiting Queen Anne’s London, I examined all her personally written letters, housed in the British Library; tracked down elusive contemporary opinions – some only to be found in England; reviewed the welter of often conflicting secondary sources to find possible clues. Thewriter must follow every lead, look under every stone; you may not find exactly what you seek, but you will always find something.

I found “the kindest of queens”[ii]to be extremely popular, and a sensible head of state, a loving and beloved wife, a woman who liked hunting and horse-racing, delighted in her gardens, and had genuine fondness for music; above all, Anne Stuart emerged as a determined female who succeeded in resolving the central conflict in her life. She overcame personal tragedy, physical frailty, and the perceived shortcomings of her sex, to become a revered and effective queen.

Many thanks, Judith. Your perspective on Queen Anne is much more satisfying that the recent movie The Favourite. I wonder which significant woman from the past you will bring alive to readers next.

Good Queen Anne: Appraising the Life and Reign of the Last Stuart Monarch by Judith Lissauer Cromwell ~~ Queen Anne (1665-1714) was not charismatic, brilliant or beautiful, but under her rule, England rose from the chaos of regicide, civil war and revolution to the cusp of global supremacy. She fought a successful overseas war against Europe’s superpower and her moderation kept the crown independent of party warfare at home. This biography reveals Anne Stuart as resolute, kind and practical–a woman who surmounted personal tragedy and poor health to become a popular and effective ruler.