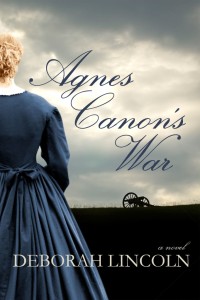 Deborah Lincoln says “I’m fascinated by the way events—wars and cataclysms and upheavals, of course, but the everyday changes that wash over everyday lives—bring a poignancy to a person’s efforts to survive and prosper. I hate the idea that brave and intelligent people have been forgotten, that the hardships they underwent have melted away like a rim of ice on a warm spring day.”

What are the ‘magic ingredients’ that make historical fiction unforgettable/irresistible? Are historical novels inherently different from contemporary novels, and if so, in what ways?

Historic fiction, like fantasy or science fiction, transports a reader to a strange and exotic place where sights and sounds and smells and situations challenge our imaginations and conjure up a world that is both escapist and instructional. It requires an exercise of a different area of the imagination that modern novels don’t stimulate. Can I put myself in the place of a woman who is nine months pregnant in July with the temperature over one hundred, air conditioning unheard of, and a fifty-fifty chance that the doctor has no cure for the complications of birth? What does it feel like to dance a waltz in forty yards of skirt – and how does one manage the outhouse dressed that way? What was Thomas Cromwell really like, as a human being with family responsibilities, what was he thinking as he won, then lost, the political games of Henry’s court? Few of us will ever have the misfortune of experiencing war in our own backyards; how did our great-grandparents bear it when jayhawkers and bushwhackers swept through their neighborhoods and burned their homes? With all due respect to contemporary novelists, the modern world is often too familiar and often too dreary, to set one’s fancy free.

In your opinion, what do the best historical fiction writers do to ‘get it right’?

The details. Assuming there’s a great story, compelling characters, a good plot, et cetera et cetera, historical fiction relies on historical ambience developed through the skillful use of detail. And not details that slap you in the face (think Gore Vidal’s 1876) but details that are almost subconsciously absorbed by readers and put them in the time and place. A mother ties a diaper because safety pins don’t exist; Kansas City was called Kansas Town before 1853; whale oil, rather than coal oil, would have been used in lamps before 1850. An appropriate detail might not jump off the page, but an anachronism surely will.

I think it’s even more important to get the dialogue right for the era, the social status of the character, and the seriousness (or lack of) of the story. A number of my readers have commented on the tone of the language in my book, Agnes Canon’s War, its appropriateness for the time period. (It takes place between 1852 and 1866 in the American heartland.) I’m hard-pressed to give examples (using “fractious” to describe a child rather than “cranky”? “That amiable drunk in the White House” instead of “that good-natured drunk”?) except to say that the language has a rhythm that is not modern and inflections that are just slightly quaint. And it goes without saying but I’ll say it anyway: the writer must avoid using modern terms or slang. I once read a Civil War-era novel in which the leading lady called a couple of visiting soldiers “you guys.” Talk about jarring.

I try very hard to ensure the characters’ reactions are appropriate to their times. For example, writing about America in the mid-nineteenth century requires an understanding about racial attitudes. Only the most enlightened people thought the races could be equal in all ways (Thaddeus Stevens, a leader of the Radical Republicans during the Civil War, was married to a black woman), so even anti-slavery advocates rarely thought the Negro should be the social equal of European descendants. The consternation about Atticus Finch’s racism in Harper Lee’s Go Set a Watchman is, I think misplaced – he needs to be judged by his place and time, not by ours. We might not like the character once we’ve judged him, but we can’t be surprised by his attitudes.

Another aspect that fascinates me and I try to insert in my work (very subtly) is how often history repeats itself. I think it’s an important part of the teaching that HF can provide to emphasize that we rarely see a new phenomenon. For example, today’s outrage over the top one percent, the divide between the classes, played out in the U.S. (probably many times in the past) but manifestly during the 1870s and 1880s: the Gilded Age, without the social safety nets we have now. The Carnegies and Rockefellers of America amassed vast fortunes while the lower classes, often immigrants from Eastern Europe, sank deeper into poverty and distress; hence the rise of labor unions and bloody class conflicts. The controversy over immigration is an often-repeated conflict but with different targets: Catholics, Irish, Chinese, Eastern Europeans, now Mexican nationalists. Burke’s idea that “those who don’t know history are destined to repeat it” is a touch overused, but HF is an opportunity to let people know about history in a way that reaches a different audience than do history classes.

In writing historical fiction, what research and techniques do you use to ensure that conflict, plot, setting, dialogue, and characters are true to the time period? What aspects do you feel need to be included when you are building a past world for your readers?

Building a world requires that every sense be included: sight (a shadow cast by coal oil footlights), sound (the unearthly Rebel yell: “Waa-wooo-yeeaaaay-yee!”), taste (venison steaks and potato balls and cheese straws), smell (the ever-present odor of dust and manure in the streets of town), touch (the rich softness of a deep velvet gown trimmed with the stiffness of blonde). Then a low-key reference to what’s going on at the time: the new book by Mr. Melville just arrived, they enjoyed a new beverage called a “lager.” I don’t know how writers did this without the Internet: did you know you can learn how to amputate a leg, without anesthetic, just by surfing the web? Of course you did. But reading books written at the time of my story is another way to get a feel for the time period and for the rhythm and language in use at the time. For nineteenth century America, immersion in books like Little Women and Uncle Tom’s Cabin and all of Mark Twain put an author in the mood of the era, and that all comes out in the writing.

Agnes Canon’s War was published in October of last year, and is the fictionalized story of my great great-grandparents’ experiences during the Civil War in Missouri. I had access to the basic facts, which a cousin pulled together in the 1970s, and the characters were so exceptional, the events so extraordinary, that I didn’t want the story to die out. Agnes Canon was 28 and a spinster when she left her home in Pennsylvania in the spring of 1852 to join a group of cousins who boated down the Ohio and up the Missouri Rivers to settle in what was then the frontier, Holt County in northwest Missouri. There she met and married Jabez Robinson, a doctor who was born in Maine and had traveled to the California gold fields and the army posts of the Southwest during the Mexican-American War. In the decade before the Civil War actually broke out, both Kansas and Missouri were a battleground of politics and occasional acts of violence, and Agnes and Jabez were in the thick of it. This is the story of two people who watch their family, their neighborhood, everything that keeps a society civil, crumble into a chaos that they are powerless to stop.

I’m currently working on a sequel to ACW, which takes place in America during the robber-baron era of the 1870s and 1880s. I find that the more I delve into the stories of my ancestors, the more tales there are to tell. Historical fiction writers need never be at a loss for plot.

Many thanks for being on the blog, Deborah. So many interesting thoughts in your interview!