Griffin Brady, author of The Heart of a Hussar, talks about the inspiration for this novel and its sequel, The Hussar’s Promise, and shares some of her research journey. Griffin – also known as Kae – and I met at the Historical Novel Society conference in 2019.

When I tell people I write historical fiction about 17thcentury Poland, the usual response is either “Are you Polish?” (to which I answer “no”) or “Why?” Simply put, it’s because I fell into a rabbit hole one day while doing research for a completely different tale. The rabbit hole, which has since grown into a megalopolis of warrens, was the discovery of the Polish winged hussars. I’d never heard of them.

My curiosity piqued, I began reading … and reading … and couldn’t stop. And so began my journey into the fascinating world of Polish winged Hussars that resulted in two novels, The Heart of a Hussar, released in September, and A Hussar’s Promise, scheduled November 2020.

A love story at its heart, The Heart of a Hussar is the tale of a young Polish winged hussar determined to distinguish himself in order to gain an estate, but his ambitions and enemies undermine his secret love for a noble maiden.

Who were the Polish winged hussars?

The Polish winged hussars were an elite group of armored cavalrymen who comprised a jaw-dropping fighting force. Exceptionally trained, the hussars were highly skilled shock troops who dominated the battlefield for over a hundred years. In short, they were a 17thcentury version of our modern day special forces, and they were formidable.

The rise of the hussars began in the late 16thcentury at the behest of King Stefan Batory, when the Kingdom of Poland was united with the Duchy of Lithuania in one vast commonwealth. Europe’s most populous country at the time, the Polish-Lithuanian Commonwealth was also one of the largest.

Poland was a center of cultural enlightenment, known for its democracy and religious freedom. Unfortunately, the Commonwealth was constantly warring with its enemies: Muscovy, Sweden, and the Ottoman Empire, together with their vassals, the Crimean Tatars. A strong military was a necessity, but Poland had only a small standing army. Hence, it relied heavily on the nobility to fight its wars.

Victory in the face of incredibly bad odds

I’m no military enthusiast, but I couldn’t help but be impressed by the stats as I immersed myself in research. Polish winged hussars were the difference maker in numerous battles where enemy armies far outmatched them, and they prevailed.

For instance, in one of their most extraordinary victories, the Battle of Kłuszyn, Muscovy, on July 4, 1610, a force of roughly 6,500 (1,000 infantrymen and 5,500 winged hussars) defeated 35,000 combined Muscovites and foreign troops in a conflict that lasted five hours.

Different accounts of this battle diminish the number of the Polish force, increase the size of the Muscovite army, or both. No matter how the numbers are nudged, however, the difference in troop sizes was eye-popping, and yet the hussars triumphed.

What I find even more astonishing is that this battle was not just one aberrant phenomenon. During the winged hussars’ golden age (late 16thcentury to late 17thcentury), they engaged in similarly skewed battles where they emerged the victors. A few examples: the Battle of Kokenhausen in 1601, the Battle of Kircholm in 1605, and the Battle of Chocim in 1621.

The Polish winged hussars were truly exceptional soldiers who flexed their formidable muscle for over a hundred years, garnering respect and dread from those familiar with their feats.

Polish sons of nobility, or the szlachta, and their retainers (pacholiks) filled the ranks of the winged hussars, motivated by duty, love of country, and honor. They began training as young boys, taught to master horses and myriad weapons, including sabers, bows, broadswords, war hammers, pistols, and the lance.

Conflicting theories abound on the purpose of a hussar’s trademark wings and whether they were regularly used in battle. That’s not the case with regard to the hussar’s other telltale battle accessory, the kopia, a hollow, metal-tipped lance used in charges. If any disputes exist with regard to the kopia, they would likely concern the lance’s length. Estimated at between thirteen and twenty feet—long enough to outreach enemy pikes—so few survived that an accurate measurement is hard to gauge.

Prowess on the Battlefield

The winged hussars came in waves at their foes, riding in formation, kopie leveled at their enemies’ navels. They barreled into their opponents with such speed and force that more than one adversary could wind up impaled on a single lance. Once a hussar shattered his lance—usually on first impact—he fell back to seize a fresh one or took up his saber and continued the attack.

The hussars’ tactics were highly effective on open ground, as documented in reports that survive today. Narratives recount the decimation of an enemy line after sustaining only one or two of the hussars’ impressive charges. The spectacle of a wall of armored cavalrymen clad in animal pelts, riding full out with girded lances, had to have been terrifying and spectacular. That sight alone was often enough to send enemy soldiers fleeing, causing their front line to open up—precisely the result the winged hussars sought.

Whether the wings added to the adverse psychological effect, they certainly wouldn’t have lessened the intimidating visual impact. No doubt they enhanced its magnificence. They are now the stuff of legends.

Where history lives and breathes

In September 2019, I had the good fortune to visit Poland and explore its treasure trove of windows into the past. At times, it felt as though an ancient structure stood on every corner! Did this history nerd get her fill? Not a chance.

Though it was my second such visit, it merely whetted my appetite to discover more. Everywhere I traveled, I found myself walking along the same paths the Polish winged hussars once walked. Being transported into the long ago was truly magical for me.

The history of this time, this place, and these valiant men is rich and deserves to be told. I hope readers will be spurred to delve further and unearth the many wonders awaiting them. 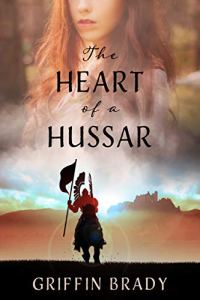 The Heart of a Hussar by Griffin Brady ~~ A tale of chivalry, love, and conflicted loyalty set in 17th century Poland

Exploiting Muscovy’s Time of Troubles, Poland has invaded the chaotic country. Twenty-two-year-old Jacek Dąbrowski is an honorable, ferocious warrior in a company of winged hussars—an unrivaled, lethal cavalry. When his lieutenant dies in battle, Jacek is promoted to replace him, against the wishes of his superior, Mateusz, who now has more reason to eliminate him.

Jacek dedicates his life to gaining the king’s recognition and manor lands of his own. Consequently, he closely guards his heart, avoiding lasting romantic entanglements. Unscathed on the battlefield, undefeated in tournaments, and adored by women eager to share his bed, Jacek has never lost at anything he sets out to conquer. So when he charges toward his goals, he believes nothing stands in his way.

Upon his return from battle, Jacek deviates from his ordinarily unemotional mindset and rescues enemy siblings, fifteen-year-old Oliwia and her younger brother, Filip, from their devastated Muscovite village. His act of mercy sets into motion unstoppable consequences that ripple through his well-ordered life for years to come—and causes him to irretrievably lose his heart.

Oliwia has her own single-minded drive: to protect her young brother. Her determination and self-sacrifice lead her to adopt a new country, a new religion, and a new way of life. But it’s not the first time the resilient beauty has had to remake herself, for she is not what she appears to be.

As Jacek battles the Muscovites and Tatars threatening Poland’s borders for months at a time, Oliwia is groomed for a purpose concealed from her. All the while, Mateusz’s treachery and a mysterious enemy looming on the horizon threaten to destroy everything Jacek holds dear.