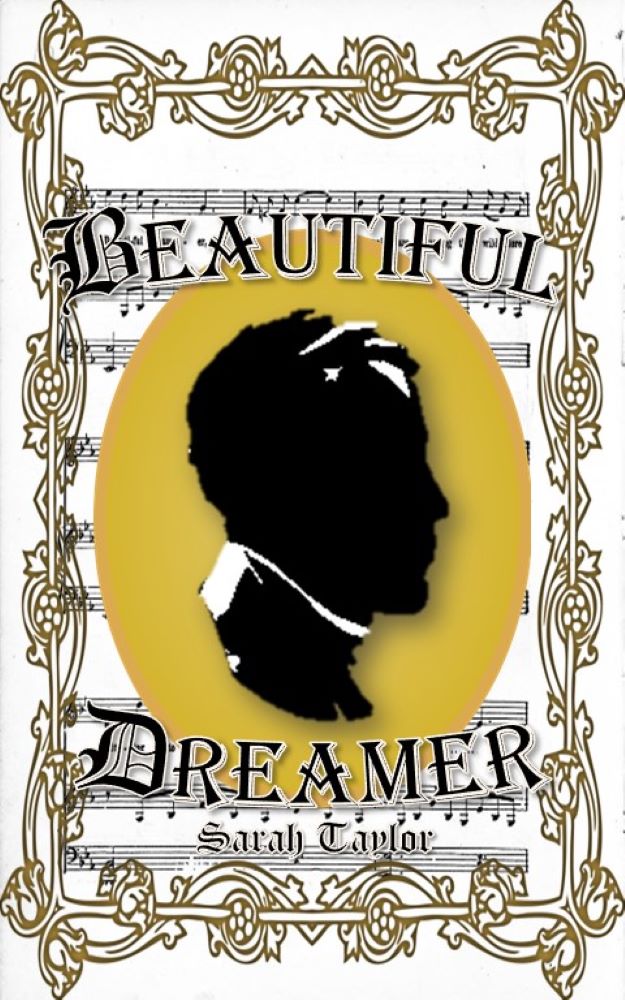 Sarah Taylor has a BA in History and an MSLS and is a writer of historical fiction who recently published her first novel, Beautiful Dreamer, a novel about Steven Foster We met online as people do these days and our conversation led to today’s post. Welcome to A Writer of History, Sarah.

M.K. Tod’s article, “7 Elements of Historical Fiction” outlines the seven most important aspects of historical fiction. I will focus on two of them, dialogue and character, as they shaped my recent novel, Beautiful Dreamer. Set in nineteenth century Pittsburgh, it follows the life of America’s first professional composer, Stephen Collins Foster. I have previously written historical fiction and historical fantasy about fictional characters.

Many new historical fiction authors create characters who behave like twenty-first century people, no matter the era they lived in, but, as historical novelist Harry Sidebottom said, “The past is another country.” It can be difficult to think as someone in another era thought, especially when they may have had beliefs contrary to the twenty-first century’s. With fictional characters, it’s easy to want to make them likeable—“They should be anti-slavery or pro-suffrage”—forgetting that political correctness as we know it today did not exist until 1970; before then, it meant “according to fixed laws” (late 15th century) or “in a politic manner” (1580s). Especially with real historical figures, they may have thought differently than people do now, and, even if you wonder, “How could they have thought that?”, it is important to represent them fairly and accurately.

For instance, in real life and as portrayed in my novel, Beautiful Dreamer, the Foster family was mostly conservative and pro-Southern, though they lived in the North, while Stephen Foster was pro-Union and anti-slavery. His father was a Jacksonian, and his brother wrote articles during the Civil War like “The Uses of Slave States,” while Stephen dedicated songs to President Lincoln. The family didn’t necessarily write why they believed what they did, which meant reading between the lines and researching reasons why similar people were pro-Southern or pro-slavery. It broadens our perspective to look at both sides of an issue, such as the North and the South, beyond the one side that’s commonly taught or discussed. Though the Civil War is often cast in moral terms, such as the North was “right” and the South was “wrong,” writing and researching different perspectives on the war helped me see all sides of an issue. As a historian and as a writer, I try to portray historical individuals sympathetically, no matter their political views.

Their hundreds of family letters opened a window on how they talked, and I drew quotes from them as they fit into the story. For instance, Stephen later wrote a friend about selling his song “Oh! Susanna” that “Though this song was not successful, yet the two fifty-dollar bills I received for it had the effect of starting me on my present vocation as songwriter.” I included this quote in the scene where he sells “Oh! Susanna” to a publisher and is happy to receive two fifty-dollar bills for it, though the publisher made $10,000 on the song. Historical people spoke and wrote differently in some ways than we do, but, in many ways, people from the nineteenth century spoke and wrote similarly to now and used familiar idioms. What Diana Gabaldon calls the “PBS voiceover effect” often used in Civil War era novels and films may be exaggerated.

If writing fictional characters, reading letters by individuals similar to your characters, whether a nineteenth century aristocrat or an eighteenth-century maid, would help, as would reading plays and novels of the time, such as Shakespeare or Charles Dickens. The Little Book of Lost Words: Collywobbles, Snollygoster, and 86 Other Surprisingly Useful Terms Worth Resurrecting, by Joe Gillard, creator of the website “History Hustle,” compiles historical words that are no longer commonly used (but should be), and the Writer’s Digest Writer’s Guide to Everyday Life series covers historical eras from the Middle Ages to the Wild West, compiling every fact important to constructing a historical era, including a glossary of slang unique to that era. Etymonline.com and dictionaries such as Oxford English Dictionary list the etymology of every word and idiom and when they first appeared.

While accuracy is important to historical dialogue, so is readability. If the dialogue is too historically accurate, a twenty-first century person might not understand it. For instance, I had to edit the quote from Stephen Foster above in the novel for clarity. It’s important to strike a balance between accuracy and understandability. I also fit dialogue from recollections of friends and family who knew Stephen into the story, including the scene where Stephen proposes to his wife, Jane McDowell, after both he and a rival suitor, Dick Cowan, accidentally show up at her house at the same time:

The next time I came [to Jane’s house], Joe [the servant] brought none other than Dick into the parlor. “What’s Dick doing here?” I whispered to Jane, but she just rose with a smile as Dick hung up his military broadcloth cape.

“You flatterer.” She laughed as they sat down.

“Good evening, sir,” Dick told me. I turned my back to them and didn’t answer, picking up a book and flipping pages without knowing the contents. Why was Dick here unless Jane had asked him to come and forgotten I was coming at this time? Jane and Dick went on talking as if nothing were amiss, and I went on flipping pages. If I acknowledged him, that would give him more reason to tease me the next day. At long last, Dick stood up and said, “Good night, Miss Jane” and “Good night, sir” to me. I ignored him. Picking up his cape, Dick left, and Jane rose to see him out.

I stood, shaking; if Jane mixed up the times on purpose, she achieved her desired effect. When Jane returned, I gathered up my nerve to ask her. “And now, Miss Jane, I want your answer. Is it a yes? Or is it a no?”

She blinked, startled, and then recovered with a slight smile. “Yes.”

I wrapped my arms around her waist and kissed her. Yes. She said yes.

Don’t be afraid to let your historical characters, whether fictional or real, espouse views that may now be considered controversial. At one point, they may have been considered mainstream; woman’s suffrage, for instance, used to be a minority view, while most women were indifferent or opposed to it. Use primary sources, such as letters and literature, for historical thought processes and dialogue, as well as dictionaries and etymonline.com to avoid anachronisms. By following the “7 Elements of Historical Fiction” outlined by M.K. Tod’s blog post, you’ll be able to write historical fiction that readers will be immersed in and remember.

Many thanks, Sarah, for adding to the discussion of the seven elements of historical fiction.

Beautiful Dreamer by Sarah Taylor ~~ Quiet and dreamy-eyed, Stephen Foster wants nothing more than to be a musician in a world where boys are supposed to grow up and go into business, like the family hero, his older brother William. Even though he can play the flute perfectly from the age of six, his family’s expectations of a traditional profession drive him to Cincinnati, where he works at his older brother Dunning’s warehouse. While in Cincinnati, he publishes his first great hit at the age of twenty-one, “Oh! Susanna.” With Firth, Pond and Company, the best New York publisher, to sell his songs and E.P. Christy, among the greatest of minstrel performers, to sing them, Stephen is sure he can make songwriting his business. He turns out hits like “Old Folks at Home” and “My Old Kentucky Home, Good Night,” songs that Frederick Douglass said “awaken the sympathies for the slave,” as if his life depends on it. With the Civil War approaching and personal tragedies striking, it does.

Beautiful Dreamer is available at Amazon and Barnes and Noble.

1 thought on “Dialogue and character with Sarah Taylor”