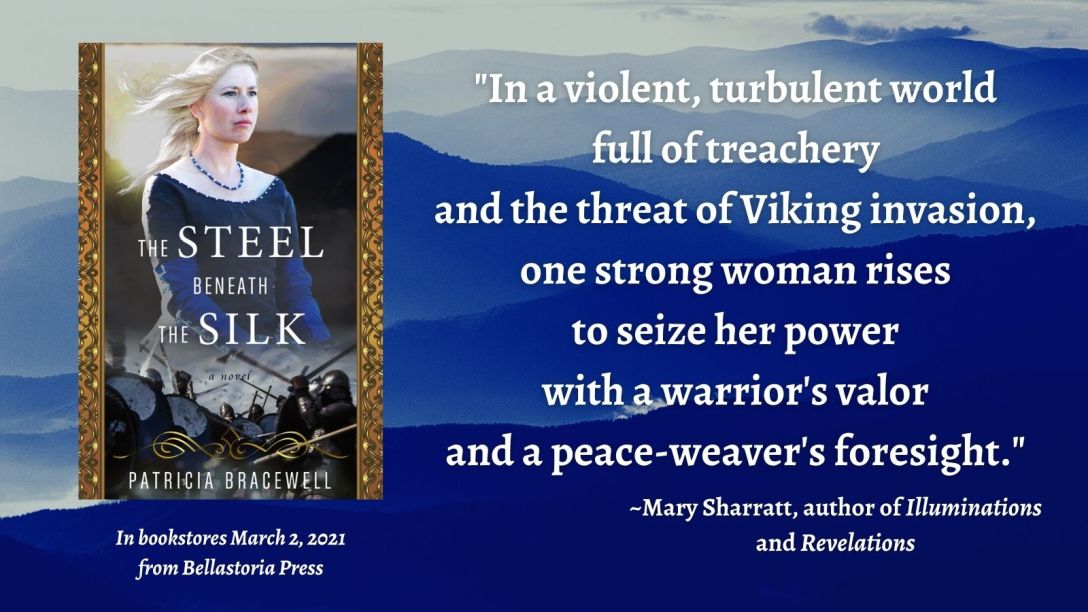 Patricia Bracewell is the author of The Emma of Normandy Trilogy and March 2nd marks the release of the last novel of this trilogy: The Steele Beneath the Silk. It’s a story “brimming with treachery, heartache, tenderness and passion as England’s queen confronts ambitious and traitorous councilors, invading armies and the Danish king’s power-hungry concubine.” With that as context, we can be assured that Patricia knows a thing or two about conflict – her topic for today.

Drama, conflict and change—things that cause such agonizing disruptions in our own lives—are what make the imaginary world of a novel utterly compelling. Conflict, in particular, is the engine that drives a story, no matter the genre. But unlike writers in other genres, historical novelists must reach into the past, must root the conflicts portrayed in their novels within the history and culture of their chosen historical periods. Conflict then becomes a tool to not only move the story forward, but to immerse readers in that other time and place.

There are three types of conflict that should be in every novelist’s toolbox: Man vs Man, Man vs Nature, and Man vs Himself. And because a writer cannot rely on just one type of conflict to carry a story all the way through to the end, all three should appear within the pages of any novel. The historical novelist, though, mines the past to find them.

In my trilogy set in 11th century England, I found plenty of Man vs. Man conflict in the decade-long Danish effort to conquer England. Big men with swords emerging from dragon ships appear in the early pages of my first book, Shadow on the Crown, and the viking invasion of England is the overarching background of all three novels.

But although I was writing about war, my main interest was not in men and battles, but in the women who lived through that conflict yet made only rare appearances in historical documents of the time. So I kept battle scenes and skirmishes to a minimum, and often described them through the words of the Anglo-Saxon Chronicle—the contemporary account of events in 11th century England. In The Steel Beneath the Silk I quoted a Chronicle entry that described a viking attack on Canterbury and was probably written by a monk in that city within living memory of the incident:

They beset Canterbury, and seized Archbishop Ælfheah…and they overwhelmed him with bones and horns of oxen; and one of them smote him with an axe-iron on the head, and his holy blood fell on the earth.

It seemed to me that this account by someone who quite possibly knew the murdered archbishop would be just as moving as anything that I could invent.

War, though, is only one kind of Man vs Man conflict. Ambition, resentment, suspicion, and rivalry can lead to conflict that is far more subtle and is conveyed through dialogue and internal monologue. For example, knowing that the two central historical figures of my story, Emma of Normandy and Elgiva of Northampton, would be pitted against each other in a struggle for power in England many years after the time period of my trilogy, I imagined how that later conflict might have begun decades earlier, and I brought it into the pages of my novels. Here Emma and Elgiva face off in The Steel Beneath the Silk:

For a long moment Elgiva continued to regard her old enemy in brooding silence. Emma was far too arrogant, she decided. She still thought herself a queen, and that was Cnut’s fault. He had foolishly made her imprisonment much too pleasant, and it was long past time to do something about it.

She said, “I wish to talk to you about your sons, Emma. I have seen Edward.” And she watched with satisfaction as Emma put aside her needle, dropped her hands into her lap and turned to face her.

“You saw him—where?” Emma asked icily, her green eyes appraising Elgiva as if trying to determine the truth of her claim.

No swords in that scene. Only a needle, resentment, suspicion, sharp words and frosty glances. Conflicts within the family, within the court, and within the realm and the wider world are the base metals that a historical novelist can, like an alchemist, transform into gold.

As for Man vs. Nature—sickness, foul weather, the very real hazards of getting somewhere on a ship, a horse, a cart or on foot—especially if time is a factor—all of these add drama and tension to any story. The characters in my novels suffer miscarriages, pestilence, terrible weather, filthy roads and dangerous sea voyages, all pulled from my research. A good example: in The Steel Beneath the Silk a tidal wave wreaks havoc on the English coast:

Merchants arrived with stories of harbors that had been devastated by a great wave; of ships that had been swept inland and left, battered and broken, far from the sea; of countless bodies of men, women and children lying like bundles of rags on the beaches or floating off shore. Even the larger towns on the English coast had been savaged by the sea, while numerous small villages had been entirely swept away…and no one left behind to even tally the dead…All had been destroyed by a tide that many believed had been directed by the hand of a wrathful God.

I didn’t make that up. The tidal wave that hit Britain in 1015 was attested to by chroniclers in Wales, England and the Low Countries. My description, though, was based on images of the tsunami that devastated Thailand in 2004—history repeating itself.

As for Man vs Himself, that conflict is usually portrayed through internal monologue as the author slowly reveals a character’s personality. But because the king who appears in my novels had been described by a 12th century historian as “haunted by the shade of his brother” I decided to use that ghost as the embodiment of the king’s guilt, fear, and indecision:

…looking warily into the middle distance before him, he could see the air rippling like water as his brother approached, every wound on his body gaping like a bloody mouth.

Forced to stare into his brother’s burning eyes he silently cursed the horror that held him in thrall. The martyred Edward, he knew now, would never settle for a golden shrine, nor even for a king’s son consecrated to his service. An eye for an eye, the Bible said. A crown for a crown. His brother and his God demanded restitution, and nothing less. There would be no forgiveness, no peace, until he relinquished the crown that should never have been his.

And that he would never do.

Fear, guilt, indecision, frustration, forbidden passion—these all lead to inner turmoil with which to torment our characters. And torment is the operative word here. The last thing a writer wants to do is to make things easy for the characters in a novel. Torment and conflict are the spurs that drive characters into action. However much we love them, we have to make them suffer until almost the very last page.

The Steele Beneath the Silk by Patricia Bracewell ~~ In the year 1012 England’s Norman-born Queen Emma has been ten years wed to an aging, ruthless, haunted King Æthelred. The marriage is a bitterly unhappy one, between a queen who seeks to create her own sphere of influence within the court and a suspicious king who eyes her efforts with hostility and resentment. But royal discord shifts to grudging alliance when Cnut of Denmark, with the secret collusion of his English concubine Elgiva, invades England at the head of a massive viking army. Amid the chaos of war, Emma must outwit a fierce enemy whose goal is conquest and outmaneuver the cunning Elgiva, who threatens all those whom Emma loves.

Many thanks, Patricia. I’m sure readers will be captivated by The Steele Beneath the Silk.