The Story of a Novel

Dear Friends .. things may look a little different for a while. Please bear with me as I adapt to the new WordPress block editor and switch to a new theme for A Writer of History.

With two novels in the capable hands of editors, I’m turning my mind to the challenge of what to write next. Two ideas have been swirling around: one is the continuation of the life of Claire, the daughter of World War One lovers Helene Noisette and Edward Jamieson. Raised by Francois Delancey as his own child, Claire never knew of her biological father until after her mother’s death. Lies Told in Silence ends when Claire calls Edward and he picks up the phone.

I’ve had many readers ask me to tell the story of what happened to Claire. Until recently, my response has always been: “When I know the story, I’ll be able to write it.”

The second idea is to write a sequel to Paris in Ruins, the novel I plan to publish in a few months time. That story would follow the lives of Camille Noisette – Helene’s aunt – and Mariele du Crecy who marries Camille’s brother. The plot would unfold during the Belle Epoque and feature some of the impressionist painters. Two years ago, I even wrote a few chapters.

I’m leaning toward the first idea. When I originally thought about writing a sequel to Claire’s story, I kept trying to imagine what would happen after Claire called Edward. It was only when I turned my imagination to what Claire’s life might have been like as a young woman living in Paris at the beginning of World War Two, that an idea sparked. 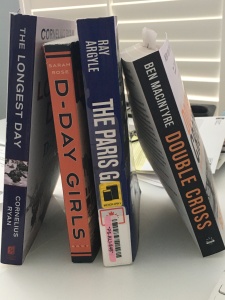 Double Cross: The True Story of the D-Day Spies by Ben Macintyre ~~ Macintyre returns with the untold story of the grand final deception of the war and of the extraordinary spies who achieved it.

D-Day Girls by Sarah Rose ~~ The dramatic, untold true story of the extraordinary women recruited by Britain’s elite spy agency to sabotage the Nazis and pave the way for Allied victory in World War II.

The Paris Game: Charles de Gaulle, the Liberation of Paris, and the Gamble that Won France by Ray Argyle ~~ Amid the ravages of a world war, three men — a general, a president, and a prime minister — are locked in a rivalry that threatens their partnership and puts the world’s most celebrated city at risk of destruction before it can be liberated. This is the setting of The Paris Game, a dramatic recounting of how an obscure French general under sentence of death by his government launches on the most enormous gamble of his life: to fight on alone after his country’s capitulation to Nazi Germany.

The Longest Day by Cornelius Ryan ~~ A compelling tale of courage and heroism, glow and tragedy, The Longest Day painstakingly recreates the fateful hours that preceded and followed the massive invasion of Normandy to retell the story of an epic battle that would turn the tide against world fascism and free Europe from the grip of Nazi Germany.

I dipped into each one of these books just a few mornings ago before settling in to read Double Cross.

I’m cautious about yet another novel set during WWII, however, a good story is a good story regardless of the time period. With luck, I can turn the germ of an idea into a story arc. I’ll let you know how it goes.