I met Patricia O’Reilly at an Historical Novel Society conference in 2014. As travelling companions on the writing journey, we kept in touch with occasional emails and Facebook comments. Today, Patricia shares a thoughtful post on her latest novel.

Researching and Writing The First Rose of Tralee, the story of Mary O’Connor (182?-1845) 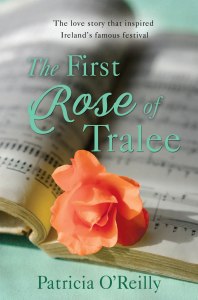 It was while sitting in my aunt’s kitchen in Tralee, Co Kerry during the school holidays that I first heard of Mary O’Connor, the young girl who inspires the annual Rose of Tralee International Festival, now in its 60thyear.

Each morning after 10 o’clock mass, auntie and her relatives had tea and biscuits sitting around the oil-clothed table. The chat was mighty. They talked the Irish history that I learned in school as though it was happening outside in the street – the patriot Daniel O’Connell and his campaigning for Repeal of the Union, the disruptive Whiteboys, the Great Famine, the curse of consumption, and Mary O’Connor featured frequently.

Mary, the daughter of a shoemaker from Brogue Lane, lived more than 150 years ago – it is said, her beauty had heads turning. The handsome William Mulchinock, a poet, campaigner and master of West Villa, fell in love with her and wrote The Ballad of the Rose of Tralee.

The story of Mary O’Connor stayed with me, lurking at the back of my mind until about four years ago when I discovered her story had not been written in novel form. Researching was a minefield of differing bits of evidence. But because I was writing historical fiction I settled on some facts, embellished others and added characters and intrigue, taking creative liberties with set pieces, imagining places, occurrences and dialogue – bearing in mind that the book could not be research-led. As I wrote fact blurred into fiction and vice versa.

The story is set in the 1840s during the time of Daniel O’Connell’s monster rallies for Repeal of the Irish Union of 1801.  The parts of his speeches that I quoted are taken from Richard Aldous’s Great Irish Speeches. The love affair between the master and the servant was doomed from the start – William’s mother was horrified; the schoolmaster grieved for them, and the final straw was when William was wrongly accused of killing a man, having to flee the country, ending up in India for five years.  When William was finally exonerated his return to Tralee and plans to marry died a quick death.

I visited Tralee and met archivists and local historians who furnished me with information maps, drawings and portraits – though there are none of Mary. I stayed in Benners Hotel, a Bianconi coach stop in the mid-19thcentury and imagined William leaving and returning to Tralee by coach.

Google provided information on the shoemaking industry of the mid-nineteenth century; the running of big houses – kitchen to upper floors; the lives of the peasants; education of the time; consumption or the white plague as TB was known.

When writing about a particular era I like to read works of fiction by other authors. Compared to what’s been written about Ireland during and after the Famines I didn’t come across much pre-famine, but I re-read Beatrice Coogan’s The Big Wind. Despite it being a contemporary novel, I familiarised myself with sensory India with Gregory David Roberts’s wonderful Shantaram.

‘The Way We Wore Exhibition’ in Dublin’s Collins Barracks Museum provided an insight into the clothing of the time. The National Famine Museum in Co Roscommon and Kerry County Museum proved useful information about  coaches, carriages, kitchen utensils and furniture of the time.

My first draft was a mess. The second daft was little better. I spent what, at the time, I considered to be inefficient days soaking up atmosphere and getting a bit of information here and there. Those ‘inefficient’ days proved invaluable as I ended up with a notebook full of information – such as the way dresses were hung in the wardrobes of the time; the use of tea to restore mahogany furniture; the healing properties of goose fat for chapped hands and the favoured foods for a formal dinner – when trifle was known as an Empire dessert.

As writers we know that the opening paragraphs – or point of entry, as it’s called in publishing circles, is most important. The opening I finally settled on has Mary’s father threatening her with marriage and her flouncing out to the potato market before wandering along to Denny Street that was ‘black with people’ as one of Daniel O’Connell’s rallies was in progress.

Great. I had a rally, Mary O’Connor and Daniel O’Connell. As I felt the story cohese I added falling snow. Why not include William Mulchinock, the hero? Margaret Mulchinock, William’s mother, an important character, was introduced in the second scene. On the death of her husband in the early 1830s she took over the running of the family businesses.

William managed the drapery store on the Mall – known as the Munster Warehouse in the 1960s where the fashion-conscious of Tralee shopped. I had him source jewel coloured silks and taffetas from the Far East – I saw such examples in London’s Victoria & Albert Museum.

Mary started as a kitchen skivvy in West Villa, progressed to the upstairs and finally was promoted to the position of nursery maid where William first met and fell in love with her.

Gradually re-write after re-write – in between illness visited on our family – The First Rose of Tralee was published. And I’m glad to say, as is said in publishing circles, it was well received.

Many thanks, Patricia. Such a mystery the way novels come together. Best wishes for another success.