The Dangerous Pleasures of Research

Iva Polansky has a wonderful blog called Victorian Paris. I came across it when looking for inspiration for an 1870 Christmas scene for Paris in Ruins, the novel I’m currently finalizing.

The Dangerous Pleasures of Research by Iva Polansky

Like it or not, if you write about something outside your personal experience, you need to research. What do you feel when you hear the word “research”? Ah, you’d rather dye your hair in rainbow hues than going that way. And why would you research, if you can write a fantasy story instead? Your world, your rules, no annoying searching. A bliss.

Research is not as hard as you think. Not anymore. Twelve years ago, when I began to write my first novel Fame and Infamy, set in the 1870s Paris, I was new at the game and I learned the hard way. I made a trip to Paris to scout for the locations of my story and to shop for books published in the 19th century. The physical effort of getting the books on the flight home also needs be mentioned along with the cost of overweight luggage. More old, out-of-print books kept coming via the mail. The expenses grew and my husband began to grumble. I don’t blame him.

Today, I could do the same research from home without spending a red cent. For locations, I’d use Google Maps where I can indulge in a virtual visit of Paris, ambling along this street and that one, looking for details that could be there in the 1870s. The e-copies of books I paid hard-earned money for are available free at the Gallica (French National Library) website. Not that I did not enjoy my Paris trip. The tastes, smells, and sounds of the city are sadly missing in electronic searching. What I’m saying here is that research needs not to eat your time and money.

In my current work, I’m visiting the late nineteenth century Paris again—and why not since I had made all that effort to get there?—and I need to create a new character: a world-famous hypnotist. Let me show you how it is done in a fast and easy way.

Next, I need to learn hypnosis. My only experience happened years ago when I saw an entertaining show in which a hypnotist made buffoons of a dozen volunteers. They remained hypnotized during the intermission when they mingled with the rest of the audience. What impressed me then was their genuine confusion when asked questions about their stage experience and I’ll never forget the peculiar glassy expression in their eyes. Since then, I’ve held hypnosis in awe.

On we go in search of a course in hypnosis. The American School of Hypnosis website offers a 446-page hypnosis manual as a free download. I snap it up (not that I will read all of it now). Better yet, YouTube provides free live courses in hypnosis, including a technique called the instant induction. The instant induction is exactly what I need and it takes only ten minutes to learn. Perfect.

The Great Beckenheimer needs a home. He is comfortably retired in a Paris suburb called Marnes-la-Coquette. I selected this location because I like the coquettish name. I go to Google maps and key Marnes-la-Coquetteto choose a 19th-century villa to describe. This can take some time as I enjoy looking at the local architecture that favors the Norman style: mostly stone with a brick and white wood trimming. There is a quaint railway station too.

As a hobby, Beckenheimer grows orchids in his small hothouse (I google orchids for gardening tips). Career nostalgia fills the old man’s living room. Here, I google 19th-century hypnosis and go directly to the images. The 19th-century advertising language is loud and shameless. I pick up several posters and click the links to the corresponding webpages. They lead to interesting articles and more images. At one time, I end up on a Russian website. No problem there. I click on the little black and white icon that appears close to the bookmark star and the text is instantly translated into English. I’m glad for the Russian detour as I find a very interesting tidbit there about the hypnotic attacks crime. (Wow, what a trick to have up my sleeve for a future story!)  If an image has no link to a website, I right-click on it and choose Search Google with this image in the drop-down menu. This will show me every website where this image is located. You can imagine the possibilities.

With this minor effort, my knowledge grows. I’m getting ideas about how to improve the story in several ways and they are ideas born from learning. The story begins to plot itself. Here, one can reach the dangerous point of addiction. I admit I’m a research junkie. After the publication of Fame and Infamy, I was left with a mountain of material, most of it unused. Saddened about all that waste, an idea came to me to offer this wealth of information to the public. After nine years in existence, four universities are now linked to my Victorian Paris blog. Last year, I published a collection of the blog posts in a 343-page ebook under the title Life in 19th Century Paris. There is no such thing as a useless knowledge and acquiring it can be entertaining. Give it a try.

Iva shares a few of her blog posts … you can find many more at Victorian Paris.

The Noon Girl: La Midinette  – After the grisette and thegigolette, here is another typical Parisian girl.

Life in the Age of Decay – Abandon all romantic thoughts about horse transport!

La Castiglione: The Too Much Countess – Italy sends a spy to seduce the French Emperor. 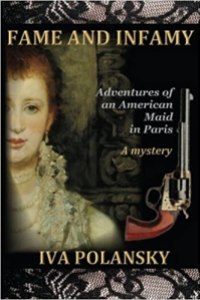 Fame and Infamy by Iva Polansky ~~ Is it hard to be famous in 1870’s Paris? Ask the sharp-shooting contest winner Miss Nelly McKay, formerly of Butte, Montana. She is already walking the thin line between fame and infamy when she is noticed by Chancellor Bismarck and the German Secret Service. Yet all she ever wanted was to marry a gentleman!

Fame and Infamy is an entertaining blend of comedy, mystery, romance and hard facts. Sarah Bernhardt and Victor Hugo are among the celebrities who share the scene with gritty characters emerging from the bohemian Latin Quarter. Paris, mopping up after the twin calamities of war and revolution, provides a background for this hearty clash of French and American cultures.