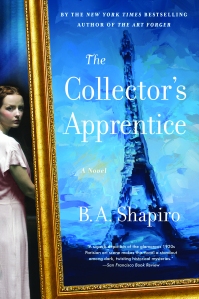 Barbara (B.A.) Shapiro is the NYT bestselling author of THE MURALIST and THE ART FORGER, both stories of art, mystery and history with a bit of romance thrown in. A few years ago, I had the pleasure of sharing coffee with Barbara as she was working on her latest novel, The Collector’s Apprentice. It’s a treat to have Barbara share some of her reflections on writing historical fiction.

How did you get started writing historical fiction?

I’ve written twelve novels over the past thirty years—eight of which have been published—and nine of these have been either totally of partially historical. I never had a plan to write historical fiction, it just worked for many of the stories I was interested in writing. And, of course, I got kind of addicted to living in completely different worlds. I also mix fictional characters with actual historical persons, and this is great fun.

What have you learned over the years?

When I wrote my first historical, I spent almost a year doing research before I began to write. My second about six months. My third about three, with much of the research going hand-in-hand with the writing process. What I learned is that, for me, it’s better to do a more cursory review of the time and place at the beginning, noting more where the information is than going into it in depth, and then returning to the specifics as I find I need them.

What do you like most about writing historical fiction?

To me, the great power of historical fiction is the genre’s ability to allow the reader to step back from their assumptions and explore the human experience with fewer preconceived notions. For example, in my novel The Muralist, the protagonist is struggling to get her Jewish family out of Europe in 1939, a plot line that engendered much sympathy for her and the immigrant experience. The book came out in 2016, just as the issue of immigration was becoming politicized, and I hope that my readers were more empathetic to the immigrants’ plight because they had empathized with Alizée’s.

What are you working on now?

Not surprisingly, after three heavily historical novels set all over the country and world, the new one is contemporary and is set in Boston, where I live. A girl’s got to have some variety.

What advice do you have for new authors?

I have two pieces of advice. First, get your butt in the chair and stay there. Second, let yourself write it wrong: that’s what rewrites are for.

Many thanks, Barbara. These days I so appreciate the way writing allows me to escape. Right now I’m in 1870 Paris rather than 2020 Covid-19 North America. But I am having trouble keeping my butt in the chair!

The Collector’s Apprentice by B.A. Shapiro ~~ It’s the summer of 1922, and nineteen-year-old Paulien Mertens finds herself in Paris—broke, disowned, and completely alone. Everyone in Belgium, including her own family, believes she stole millions in a sophisticated con game perpetrated by her then-fiancé, George Everard. To protect herself from the law and the wrath of those who lost everything, she creates a new identity, a Frenchwoman named Vivienne Gregsby, and sets out to recover her father’s art collection, prove her innocence—and exact revenge on George.

9 thoughts on “Reflections on Writing Historical Fiction with B.A. Shapiro”