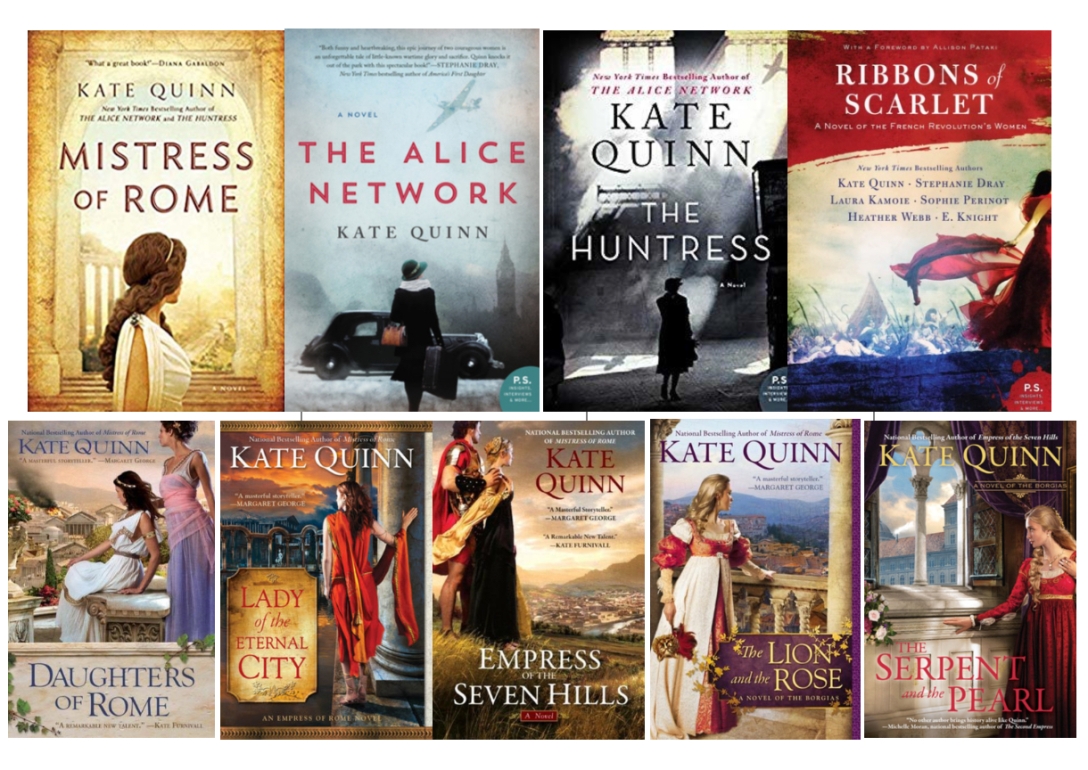 I’m launching a new series today and delighted to have Kate Quinn here to kick things off. The series? I’ve asked a number of well known authors to reflect on their years of writing historical fiction. Some of these authors have been writing successfully for more than thirty years. Some are based in the US, others in the UK. And they all have wonderfully successful novels.

Today, Kate Quinn discusses several topics and offers an in-depth look at what it’s been like to switch time periods.

It’s a question I’ve grown familiar with, as a historical novelist who has made a recent, monumental jump in time periods. My first love was the ancient world, and that was where I gravitated when penning my first novels, eventually writing four set in early Imperial Rome. I made a two-book jump after that to the Italian Renaissance and the delicious cesspit that was the rule of the Borgia pope, yet it was still Italy, still Rome, still comfortably pre-modern. But my latest books “The Alice Network” and “The Huntress” pole-vault all the way into the 20th century, telling respective stories of a World War I spy ring and the World War II all-female bomber pilot regiment known as the Night Witches—and a jump that big will give you whiplash, believe me. Why, readers asked, did I make such a big change in subject and research matter? 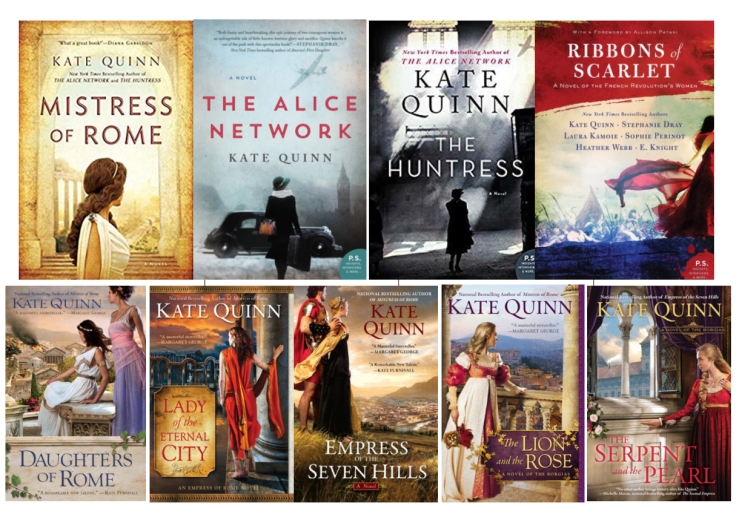 Part passion, and part practicality. I have always been a writer with far more story ideas teeming in my head than I can ever get round to writing, and there were always some 20th century notions lurking among the plots about Roman empresses and Renaissance courtesans. I started giving those fledgling ideas some serious consideration when I looked at the market and saw the recent boom in 20th century historical fiction.

Now, I can’t write what I don’t love—I don’t think any author can—but the question here wasn’t “Can you write in an era you don’t love?” It was “Can you learn to love a new era?” The answer turned out to be “yes.” I like the 20thcentury a lot, and once “The Alice Network” bloomed into a full-fledged story in my mind, it positively begged to be written. “The Huntress” followed right on its heels.

Making a jump this big does have its scary moments, though. After writing four books in ancient Rome and two in the Renaissance, I was very comfortable in those worlds. I know the courtship customs, the vocabulary, the period-appropriate coinage and clothes and food, and I have it all at my fingertips without needing to look much of anything up. Writing in a historical era you know well is like lounging around in your favorite Pjs, or dog-paddling through the shallow side of the swimming pool. Taking on an entirely new historical era feels like being tossed head-first into the deep end: I was researching everything in a frantic effort to acquire the kind of familiarity with the era that novel-writing requires. Because it isn’t getting a battle’s date wrong that will sink your story; concrete dates and bare-bones facts are for the most part easy to look up—it’s the tiny details like not knowing if a zipper would be on the back or the side of a woman’s dress in 1947, or how much afternoon tea would cost with rationing laws in place. Those are the things that are hard to dig up, and I sweated bullets researching “The Alice Network” and “The Huntress.”

But it was worth it. I’m proud of my 20th century novels, and I hugely enjoyed writing both. I still love ancient Rome and the Italian Renaissance, and I plan to pen more -stories set there . . . but for the time being, I’m enjoying my jump to the 20th century, and have no plans to leave just yet!

What aspects do you love about writing historical fiction? It’s a way to examine universal human issues through a lens of the past–and a way to make people realize that humanity has not changed, even if it dresses in different clothes and uses different language than we do in the modern era!

What advice do you have for new authors? Embrace the suck–i.e., give yourself permission to be bad! Because all first drafts are bad, and that’s ok, but I see many new writers get so paralyzed by the inner voice that says “This is so terrible, I can never show it to anyone” that they never really get off the ground. It’s ok if your first draft is bad; it will get better. And you don’t have to show your work to anyone until you’re ready, so just write without fear of what anyone will say–especially that critical inner voice.

What are you working on now? My next book is titled THE ROSE CODE, about the female codebreakers of Bletchley Park. It should release early 2021.

Many thanks, Kate. I love your perspective on changing time periods. I should mention that my book club had a lively discussion of Kate’s The Alice Network on Monday – everyone loved it! You can also read an earlier post featuring Kate Quinn and The Alice Network.

STAY TUNED FOR MORE AUTHORS REFLECTING ON THEIR YEARS OF WRITING HISTORICAL FICTION.

14 thoughts on “Reflections on Writing Historical Fiction … with Kate Quinn”