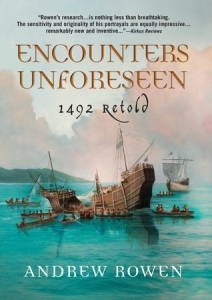 Andrew Rowen practiced law for almost 30 years prior to retiring to write his first novel, Encounters Unforeseen: 1492 Retold. He has long been interested in the roots of religious intolerance and devoted six years to research and travel to nearly all the Caribbean, European and Atlantic locations where the book’s action takes place, including the archaeological sites where the Taíno chieftains lived in Haiti and the Dominican Republic. Here’s the story of bringing this novel to life.

Encounters Unforeseen: 1492 Retold dramatizes the history leading to 1492’s momentous encounters from a bicultural perspective, sharing fictionalized life stories, actions, and beliefs of three historic Taíno Indian chieftains and a captive who knew Columbus alongside those of Columbus and Spain’s Queen Isabella.

The book presents the history through the protagonists’ eyes and intimate relationships, all based closely on primary sources, anthropological studies of the Taínos, and my investigations of the locations where the action took place. Readers often ask why I wrote the book as a historical novel, rather than a history, and the purpose of the on-site investigations.

I wanted to present the Taíno and European protagonists and their beliefs with commensurate stature and gravitas, thereby avoiding the Eurocentric focus of most accounts of 1492, including those that are anti-Columbus. The Taínos had no written history, and I felt there wasn’t enough historical information regarding them to permit writing a history with that balance; the speculative, reasoned fictionalization of a historical novel was necessary to achieve it.

But I also sought historical validity—to present each protagonist’s actions and thoughts consistent with my researched interpretation of the historical record to the extent one exists and, to the extent one did not (as I speculated likely could have occurred) without inventing overarching literary story plots. I believe well-researched historical novels cannot only educate readers on historical topics, but it can also communicate the essence of what historical protagonists experienced and thought, so long as the reader understands that the work reflects the author’s interpretation alone, rather than an analysis of possible interpretations. I included a sources section in the book citing the works I relied on and explaining contrary interpretations.

I’m now writing the sequel—with the same protagonists, in the same manner—to depict the Taíno chieftains’ resistance and subjugation when Columbus returned on his second voyage (1493–1498).

When I plotted Encounters Unforeseen, I typically placed the protagonists at the most important or revealing historical events, and on-site investigations were central to both the dramatization of events and the completeness of my historical research. The depictions of Isabella’s anointment as queen and Columbus’s recruitment of captains and crews (in Spain), the Taíno captive’s seizure to serve as Columbus’s interpreter (in the Bahamas), and Chief Guacanagarí’s rescue when the Santa María sank (off Haiti), all reflect understanding, detail and ambience learned visiting the historic site.

Even scenes that are largely fictional, such as the eight-year-old vignettes, incorporate my personal time spent at the sites described to help readers develop an appreciation of those sites—I hiked to a pond on the Turks & Caicos to visualize the future chief Caonabó’s duck hunting initiation, and I walked a route from Columbus’s parents’ home to port in Genoa to reconstruct what he would have passed in March 1460. Overall, I traveled extensively in the Bahamas, the Dominican Republic, Haiti, Italy, Portugal, and Spain, and the sequel has or will take me back to some of these countries and to Cuba and the Lesser Antilles.

After five centuries, many historical sites obviously can’t be visited—modern towns or buildings have superseded them, or they lie within private property. Condos now rise from the location of one of Isabella’s childhood castles. The villages of the Taíno chieftains are long gone, although archaeological digs approximate Chief Guarionex’s. Sometimes local people are unaware that a protagonist (frequently, Columbus) once visited, and, while a structure remains, nothing of the history has been preserved or commemorated.

The collections of our museums are substantial (particularly the National Museum of the American Indian’s collection), but my historical research could not have been complete without visiting the museums in the Caribbean, Italy, Portugal, and Spain with exhibits relating to the Taínos, Columbus, the encounters themselves, and/or the Spanish crown’s regulation of its colonization of the Americas. The Taíno exhibits of the Dominican Republic’s Museo del Hombre Dominicano in Santo Domingo were particularly helpful.

Traveling in the Caribbean also was essential for meeting Caribbean-based academics and local people of Taíno origin, supplementing conversations with academics and Taínos resident in the United States. My understandings of 15th century beliefs, religions, and prophecies have been significantly influenced by the guidance and insights of dozens of people I’ve met throughout the region. I try to be careful separating modern culture from that of the 15th century. You can hire caciques (chiefs) to conduct a Taíno wedding today, but I stuck to 16th century primary source descriptions of Taíno weddings to dramatize Anacaona’s marriage to Caonabó.

Last but not least, many historical sites I’ve visited triggered inspiration of what to dramatize and even the literary mechanism for doing so. The Hall of Kings in Segovia’s alcazar—where Isabella was held against her will when a teenager—displays the busts of Castile’s prior kings, and very few queens, and served as a prompt and vehicle for explaining her dynastic struggle to achieve the throne in a male-dominated society. The tiny harbor on Gomera (one of the Canary Islands, Spain)—where the Niña, Pinta, and Santa María departed west across the ocean—sits remote in the Atlantic and reminded (better than any historical account) of the courage and expertise it took to sail west. The beach at Bord de Mer de Limonade, Haiti—where Columbus began to deceive Guacanagarí that he intended an alliance rather than subjugation—lies unknown and forgotten to most, its tranquil beauty utterly belying the betrayal accomplished there and urging me to explain it. The majesty of Caonabó’s great ball court (the Taínos had a ball game) lies preserved in San Juan de la Maguana, Dominican Republic, and inspired the balance of stature and gravitas I have sought.

Many thanks for sharing your experience of writing historical fiction, Andrew. Bringing such long ago events to life is a unique challenge. I wish you much success.

Encounters Unforeseen: 1492 Retold by Andrew Rowen ~~ After 525 years, the traditional literature recounting the history of Columbus’s epic voyage and first encounters with Native Americans remains Eurocentric, focused principally—whether pro- or anti-Columbus—on Columbus and the European perspective. A historical novel, Encounters Unforeseen: 1492 Retold now dramatizes these events from a bicultural perspective, fictionalizing the beliefs, thoughts, and actions of the Native Americans who met Columbus side by side with those of Columbus and other Europeans, all based on a close reading of Columbus’s Journal, other primary sources, and anthropological studies.