Adventures on the Wine Route by Kermit Lynch, Born to Run by Bruce Springsteen, Kingdom of Ice by Hampton Sides, My Promised Land by Ari Shavit, non-fiction, Riel and the Rebellion by Thomas Flanagan, Sapiens by Yuval Noah Harari, selection of non-fiction, Shoe Dog by Phil Knight, The Gambler by William C. Rempel, Trumpocracy by David Frum, WTF: What's the Future and Why It's Up to Us by Tim O'Reilly

On Tuesday, I shared the books on my bedside table. Today, I thought I’d show you my husband’s pile. It’s rather large 🙂 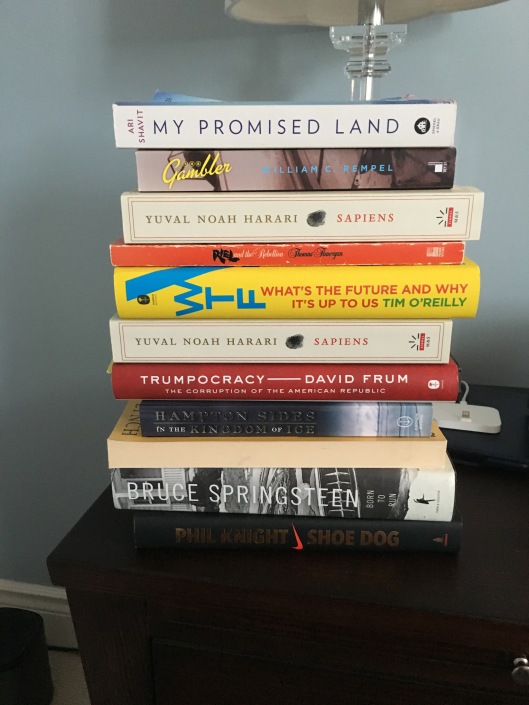 The first thing you’ll notice is that it’s enormous. And I’ll let you in on a little secret … it keeps growing. Why? you ask. Well, that’s because my husband does 99% of his reading electronically with the exception of the daily newspaper that still arrives at our front door.

Let’s have a look:

My Promised Land by Ari Shavit. This is on Ian’s bedside table because I read it and recommended it highly. It’s about the complexities and contradictions of Israel – how it came to be, whether it can survive, and the issues and threats facing the country.

The Gambler by William C. Rempel … or how penniless dropout Kirk Kerkorian became the greatest dealmaker in capitalist history. If you thought Donald Trump was a dealmaker, think again.

Sapiens: A Brief History of Mankind by Yuval Noah Harari … from insignificant apes to rulers of the world. Lots of accolades for this book. You’ll notice there are two copies!!

Riel and the Rebellion by Thomas Flanagan .. an examination of Canada’s Northwest Rebellion that took place in 1885.

WTF: What’s the Future and Why It’s Up to Us by Tim O’Reilly. This book “explores the burning question of how to master the technologies we create before they master us.”

Trumpocracy: The Corruption of the American Republic by David Frum .. the title speaks for itself.

Kingdom of Ice by Hampton Sides … the grand and terrible polar voyage of the USS Jeannette which took place in 1879.

Adventures on the Wine Route by Kermit Lynch … a wine buyer’s tour of France.

Born to Run by Bruce Springsteen … an autobiography of this highly acclaimed musician and performer.

Shoe Dog by Phil Knight … the founder of Nike tells his story.

As you can see, they are exclusively non-fiction and cover a wide range of topics. I wonder whether the pile will continue to grow or will it diminish over time?

4 thoughts on “Chapter 2 of What’s on Your Nightstand”