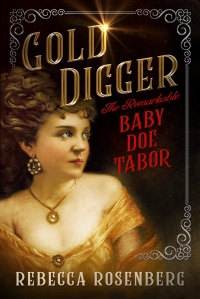 California native Rebecca Rosenberg writes historical fiction. She was on the blog a while ago talking about her debut novel, The Secret Life of Mrs. London. Beyond writing, Rebecca and her husband, Gary, operate the largest lavender product company in America, selling to 4000 resorts, spas and gift stores. Welcome back, Rebecca.

Have you noticed symbols in fiction books you read? Do you like them?

I love what they do in a story! Especially if they are well integrated into the story and change in meaning along the way.

Here are a few examples from my new novel GOLD DIGGER, the Remarkable Baby Doe Tabor, and a few from other authors. I hope these examples will make you think of others.

PEACOCKS! In the beginning of the story, Baby Doe has a peacock fan, a symbol of her beauty and pride. She has never seen a peacock and has always wanted to, so it also stands for her unfulfilled dreams and wishes. Mid-story, she quotes that the eyes of a peacock feather can see the future, which is unknown and uncertain for her. She tells the Silver King, Horace Tabor, she would love to see a real peacock. After they are married, he brings her a hundred; a symbol of his extravagant love for her. The Tabor’s neighbors complain about the peacocks and when they lose their fortune, Baby Doe has to sell all the beautiful birds.

SILVER DOLLARS! Horace Tabor gives silver dollars away to everyone he meets as a symbol of his open-handed generosity, which gets out of hand. At his funeral, everyone gives Baby Doe silver dollars as a tribute to him.

In GOLD DIGGER, Baby Doe Tabor is deathly afraid of the Chinese miner foreman, Chin Lin Sou, since she’s never seen Chinese people before. Chin scares people with his towering height of 6 feet, 6 inches, incongruous blue eyes and few words. Imagine her fear when she has to work side-by-side with Chin in the gold mine! However, when she is in trouble, Chin transforms himself to a Pixiu and protects her through many dangerous situations.

PIXIU! A Pixiu is a mythological Chinese creature who protects its human master. Pixiu have the frightening head of a horned dragon and the fierce body of a lion, with clawed feet and feathered wings which fly between Heaven and Earth. Pixiu crave the smell of gold and silver and like to bring their mastersprecious ore in their mouth. Pixiu is said to have feathered wings with which can fly between heaven and earth.

In THE SECRET LIFE OF MRS. LONDON (2019 Gold Medal winner of world’s largest book competition, the IPPY’s) is about the love triangle between Houdini, Jack London his wife, Charmian. Symbols have a lot of meaning.

Jack London dictates his stories to his wife, Charmian, who types up his work on her trusty Remington typewriter. They spend every morning together, with him telling her stories, then in the afternoons she edits and embellishes them. Charmian always serves Jack, and he likes it that way. Later, when Charmian starts writing her own books, she gets him a new-fangled ediphone to record his stories for a secretary to type up later. Through these symbols, we understand that the London’s relationship is changing and Charmian is standing up for herself. Jack throws the ediphone at a palm tree and breaks it, unhappy with the change.

FOOD! In THE SECRET LIFE OF MRS. LONDON, Charmain has a sensual relationship with food, which symbolizes her unrequited love/lust for her husband, Jack London, and her taste for the exotic and unusual, which is both Houdini and Jack. Charmian loves Dungenous crabs, oysters, raw bonita fish…and in Hawaii, she eats fried masala and in New York, gooey Gogosi pastries and cheese and mushroom strudel.

SUFFRAGETTE DOLL. Perhaps my favorite symbol is Bess Houdini who carries a suffragette doll in her carpet bag. The doll is a symbol of the children she longs to have, and also the times where women have not yet earned the right to vote. Former showgirl Bess Houdini is the least likely person for educated Charmian London to befriend, and yet what the doll symbolizes is meaningful for both of them. Bess gives Charmian the doll when she leaves for Hawaii, symbolizing their shared desires.

I asked my author friends for examples of symbols and their meanings from their novels.

From author Martha Conway: “In my novel THIEVING FOREST, Susanna Quiner follows her five older sisters after they’ve been abducted from their Ohio cabin in 1806. She takes with her a turkey hen bone, which her father, now dead, found in a field after a herd of buffalo ran through it, and he gave it to Susannah. It is Susanna’s symbol of luck, and of family, and of change. (It was the last buffalo they ever saw.) Later, after she loses the bone, she receives a necklace of turkey hen bones from a Chippewa chief as a symbol of good will.”

From author Ann Howard Creel: “In my upcoming novel, MERCY ROAD, the main character wears a baby locket given to her by her father as a symbol of his love.  After she loses everything in a fire except what she was wearing at the time, including the locket, she also sees it as a symbol of survival.  Later in the novel she passes it on to someone headed to the front in hopes that he survives.

In THE UNCERTAIN SEASON, a wealthy socialite gives a homeless waif a blue satin evening gown as a gift, so it begins as a symbol of well wishes.  But the dress ends up causing harm to the girl, therefore it transforms into a symbol of misguided charity and the gap between the social classes.”

So, what symbols have you noticed in the novels you’ve read?

How interesting, Rebecca. Thanks for sharing how you and others have woven symbols into your novels. I don’t consciously do this, however, I’ve had readers comment on the symbolism they’ve found 🙂

GOLD DIGGER, The Remarkable Baby Doe Tabor, by Rebecca Rosenberg.  When Baby Doe’s family loses everything in a fire in 1878, the twenty-year-old is forced to marry and go west to prospect a gold mine. Abandoned and running the mine alone, she finds true passion with Silver King Horace Tabor, married and twice her age. When scandal and economic ruin threatens Tabor’s life, Baby Doe is forced to make a painful choice.

3 thoughts on “Integrating symbols into a story – by Rebecca Rosenberg”