In Flanders Fields by Jess Lederman 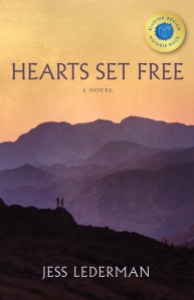 I’m welcoming Jess Lederman to the blog today. After his wife’s was diagnosed with ALS, Jess left the business world behind and moved with her to Alaska. “There we looked out on the glory of God’s creation and read to our heart’s content during the last two years of her life.” This tragedy led to Hearts Set Free which opens in the Alaska Territory in 1925.

In Flanders Fields by Jess Lederman

We writers of historical fiction have wonderful opportunities to incorporate settings that provide instant drama and to feature fascinating real-life characters. I love to see the ways in which writers use those opportunities and I try to make the most of them in my own writing.  For example, a horrific historical event on the killing fields of the First World War provides a dramatic backdrop to introduce and explore important themes in my novel Hearts Set Free.

One of the story’s historical characters, Georges Lemaître, who was both a physicist and a Roman Catholic priest, is not very well known to the general public (even though, as the father of the Big Bang theory, he was one of the greatest scientists of all time!). What would be the most compelling way to introduce him to readers?

Well, it so happens that Lemaître fought on the front lines of Flanders Fields during World War I and witnessed one of the first uses of poison gas in combat. What’s more dramatic than that? I employed some literary license to have the young Lemaître injure his leg, so that he needs to be rescued by one of my fictional heroes, Bible-school dropout David Gold. We get to know the two characters as they talk in an abandoned trench, waiting for the cover of darkness to rejoin their unit and hoping that the Germans will not again unleash their dreaded chlorine gas.

The horror of chemical warfare provides an opportunity for the characters to discuss matters close to both of their hearts—God’s sovereignty, and how His goodness can be reconciled with the existence of abject evil—important topics in the novel:

We came to reinforce the French position after the slaughter,” said Lemaître. “They say over five thousand French and Canadian died; I think closer to ten. You could see that men had clawed their own faces, trying to breathe; some had shot themselves to escape the agony. Nothing had survived; not the horses, chickens, rabbits, or rats. Everywhere I looked there was only death. And the strange scent of the chlorine gas, like pineapple and pepper, lingering on the few bushes that were left.

“What drives me to my wits end,” said David, “is how to reconcile something so evil with the sovereignty of God. Those men who were gassed—did He dream their tortured deaths before the beginning of the world?

“Nothing evil is of God. He gave us the gift of free will, that we might love—love each other and love Him. This gift came with an incalculable cost; for it allowed sin, our sin, and that could be dealt with only by the Cross. Yet will He bring about good from every act of evil, even from all of this—” Lemaître gestured to the devastated landscape that lay beyond their trench— “and there, David, you find the sovereignty of God. Most of all, He is Emmanuel, He is with us; He is the fourth in the furnace. He is right here, with you and me, even now.

I always look for first-person accounts when I’m doing historical research, and the passage above is a good example of how useful this can be. It’s the details which Lemaître provides about the aftermath of the gas attack—details I found from the tales of soldiers who had witnessed this infamous episode–that make this passage particularly compelling.

One of the themes of Hearts Set Free is how passages from Scripture—especially the Psalms–can be used as prayer in response to life’s challenges, great and small. In Flanders Fields, while they’re waiting for nightfall, David and Georges at first deal with stress by fantasizing about their favorite foods. But after they discover their shared passion for Scripture, the two begin exchanging passages from the Psalms:

“The cords of the grave entangled me, the snares of death confronted me.”David felt himself filling with a strange joy as he gave voice to the ancient words. “In my distress I called upon the Lord; to my God I cried for help. From his temple He heard my voice, and my cry to Him, reached his ears.”

“Make me know the way I should go, for to you I lift up my soul.” How grateful he was, David thought, that the Lord has led him to commit these words to his memory, to his heart. “Deliver me from my enemies, O Lord!  I have fled to you for refuge.”

“Indeed, our lives are hidden with Christ in God,” said Lemaître. “But listen. Something has changed.”

From the French and Belgian lines came the sounds of distant shouting. David peered over the top of the trench; from the German lines, against the clear blue April sky, were coming billowing clouds of green-gray death.

The intensity of trench warfare and the drama of a poison gas attack are captivating in and of themselves, but in this case also serve the purpose of introducing two of the novel’s themes in what I hope is a convincing and compelling manner.

Many thanks, Jess. World War One is a topic of great importance to me. I’m sure many, many soldiers drew strength from their faiths during that horrific war.

Hearts Set Free by Jess Lederman weaves together three tales of men and women who journey from the darkness of doubt to triumphant faith and from the ache of loneliness to everlasting love.
In 1930, the rag-tag riffraff of a railway stop called Las Vegas need a fighting man to shepherd their tiny church after their pastor is murdered. Might David Gold, a washed-up boxer and Bible-school dropout who fights as the Pummelin’ Preacher, be the answer to their prayers?

At the same time, Luke, a native Alaskan boy, is on a quest to find his father, who has abandoned his family for a beautiful woman his mother vows to kill. Little do mother or son imagine that their journey will take them to a small town in Nevada where demons and angels walk among men.

In 2011,Science Cable T.V. producer Tim Faber is determined to prove that mankind has no need of God, while his lover, Joan Reed, strives to regain the faith of her youth. They’re bound for Las Vegas to meet with 99-year-old Luke,who holds the key to a mystery they must solve–and answers that will forever change their lives.