The Girls in the Picture by Melanie Benjamin 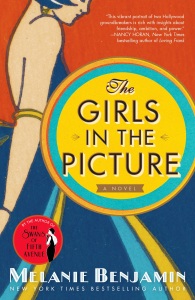 A few weeks ago, I read The Girls in the Picture by Melanie Benjamin which is a fascinating look at the early days of the movie industry. Among Benjamin’s novels are The Aviator’s Wife (a great story about Anne Morrow Lindbergh) and the NYTimes bestseller The Swans of Fifth Avenue. Interspersed with my review are a few comments from the author.

Hollywood – the glamour, the celebrities, the blend of real and fantasy that captivates and seduces. We know it today as a well-oiled machine. However, in the early nineteen hundreds it was a fledgling industry full of determined, innovative men and women creating something new. Melanie Benjamin’s latest novel, The Girls in the Picture, features Frances Marion, who would ultimately become a famous screenwriter, and superstar Mary Pickford along with their long, tumultuous friendship.

Why did Benjamin choose this story to write? “I love early Hollywood; it’s one of my favorite times and places. The film industry was just beginning and it really was like the wild, wild west in a way—everyone was young, nobody had experience, they were making everything up as they went along, with no idea that what they were doing was inventing a new art form. And women were just influential as men in those early years.” Why Frances Marion and Mary Pickford? “Not every real person can carry a novel; I’ve learned that the hard way!  But Mary and Frances leapt out to me; everything about them—their personal lives, their accomplishments and most importantly, their empowering friendship—screamed NOVEL to me!”

As the years unfold, the story glitters with stars and movie big shots—Charlie Chaplin, Douglas Fairbanks, Samuel Goldwyn, Cecille B. Demille, Hedda Hopper, Rudolph Valentino—and the gradual shift from silent films with simple plots to longer, still silent films and then on to talkies.

Mary Pickford adapts as the industry changes but ultimately fails to make the transition to spoken dialogue successfully. In contrast Frances Marion’s writing talents grow once she gives herself permission to write and to be the “person who could move an audience to a frenzy, and start a revolution of her own.” Frances ultimately thrives as moviegoers and industry executives look for stories with more complexity. For both characters, the challenges of such a dynamic environment are significant. In the long run, as men come to dominate the industry, they struggle to remain in charge of their destinies.

Bookended by two scenes from 1969, the story unfolds chronologically from 1914 to 1932. It is full of insights into how the movie business developed and who was involved. The risks and unsavoury choices facing women are portrayed alongside the opportunities. Fran observes about Mary: “Why had I never even thought to ask her about this kind of abuse; what else had she, and others like her, had to suffer—to accept—as part of the steep price some men exacted for a woman’s ambition?”

Through Mary Pickford’s and Frances Marion’s struggles to find an enduring relationship with the men in their lives, Melanie Benjamin illuminates the complications of love for women in the movie business. “Men can be in love and it doesn’t affect anything else they do; it gives them even more cachet. It adds something to them. But for women, love doesn’t add, it subtracts. Why do I feel as if falling in love means I have to give something up?”

With an impoverished, fatherless childhood, and the role of family breadwinner, Mary was incredibly vulnerable: “… she was afraid of losing everything she’d worked so hard to achieve. She was scared. Every day on the set—every day of her life—she was scared.” Even though Mary was one of Hollywood’s golden stars and had “more experience than any of them, [she] still wasn’t always taken seriously, just patted on the head and told to smile prettily for the camera.”

World War One was a turning point for Frances Marion: “Some people want to be of use. Even women, you know. We don’t all like the idea of sitting at home while our menfolk take care of all the difficult things in life.” Hollywood was different after the war, no longer new and struggling, instead it had become big business with huge international potential because Europe had been so devastated by the war. While Mary Pickford, Douglas Fairbanks, Charlie Chaplin and two others form what becomes United Artists, Frances goes her own way. “There was a new gulf between them filled with different experiences, different ideas. She could only hope they’d find a way to bridge it.”

In this post-war period Fran reflects: “I was strong. I was capable. I didn’t need Mary to pave the way for me anymore.” And she realizes that her dearest friend had changed: “there used to be a time when she [Mary] understood how to be a friend as well as a movie star.”

The Girls in the Picture alternates between two voices: Frances Marion written in first person and Mary Pickford in third person. Although Fran’s is the stronger, more engaging voice, Benjamin’s approach allows readers to more fully appreciate each character’s motivations, thoughts, and emotions. Why did Melanie Benjamin choose this approach? Apparently her editor suggested it and the approach worked. “To me, it reinforced the idea that this is Frances writing Mary’s story—just as Frances wrote Mary’s movies, wrote her life, in a way, all those years ago.”

This compelling look at two famous women entertains and informs while transporting readers to the magical kingdom of the movie industry. Highly recommended.

Join 2,106 other subscribers
PrevPreviousReaders Bring Their Perspective – Claire has her say
NextReaders have their say …Next