Fiona Veitch Smith is a writer and university lecturer, based in Newcastle upon Tyne. She’s written four mysteries set in the 1920s: The Jazz Files, The Kill Fee, The Death Beat and her latest, The Cairo Brief. Fiona has previously written for stage and screen which gives her a unique background for historical fiction. I’m delighted to host Fiona as part of the blog tour introducing The Cairo Brief to readers.

The Poppy Denby Investigates books are murder mysteries set in the early 1920s. At the beginning of the first book, The Jazz Files, it is less than two years since the armistice that ended the Great War, resulting in the death of seventeen million people, and only eighteen months since the height of the Spanish Flu that wiped out a further seventy million. Poppy Denby, who is just starting out on a career in journalism, is full of hope – but sorrow is never far away.

That is something that really attracted me to the period and why, ultimately, I decided to set my books in the 1920s. I wanted to write stories that balanced darkness and light. On the surface the books are fun, frolicking adventures, but you don’t have to scratch very far under the surface to find some serious social issues. While some characters are living the high life, others are in misery. The 1920s – alternatively known as the Roaring Twenties, the Jazz Age and the decade of the Bright Young People – is characterised by a generation desperate to leave the horror of war behind them and to create a ‘bright new world’. Little did they know, the world they were so blithely building would crash into economic darkness within nine years, and be at war, once again, by the time Poppy turns 40. I find that thought deeply poignant, and it is never very far away from me when I am writing.

But in the early 1920s they did not know this and they danced to new jazzy music from America and wore skimpy dresses and cropped or ‘shingled’ hair that scandalised their Edwardian mothers. Everything was new, daring and very self-consciously turning its back on the past. There is a certain romance about the 1920s, and a rich vein of material to draw upon for any writer setting work in that period. It is the decade in which moving pictures became popularised and much of the film footage is available to us today. In addition, the music and fashion are iconic, providing a fabulous soundtrack and wardrobe for Poppy and her friends.

As I have previously written for stage and screen, my writing is very visual. One reviewer said she could almost ‘see’ the story as if it were being acted out on stage. Just as I would create the mis en scene by selecting representative costumes, props, music and actions to evoke a sense of the period, I do the same in my novels. Before I even start writing – and certainly during the process– I absorb myself in the music, fashion, art, architecture, cuisine, cinema and theatre of the period. There are lots of collections online, plus books to read and museum exhibits to visit. I even made an outfit from an original 1920s pattern for my first Poppy Denby photo shoot!

In terms of the historical background I take a more academic approach. I have a degree in history (simply a BA) but it is enough to ground me in the techniques of historical research. I prepare for writing in the same way I used to prepare for my university exams – sketching timelines and flow charts and trying to reach an understanding of the broad historical, political, social and economic backdrop, rather than memorising ‘details’. The details can, and are, easily added later. But I do not start writing until I have a feel of what it might have been like to live in that period – I try to read diaries, biographies and novels written at the time – as well as how the period ‘fits’ into history.

For my latest book, The Cairo Brief, I signed up for a six-week online course in antiquities theft, run by Glasgow University through Future Learn (a totally free service!).

But then I stop, switch brains, and start to focus on the story, the characters and the mystery. That for me is the most important part. The history is certainly the skeleton of my books, but the muscles, the flesh and the beating heart are Poppy, her friends and their adventures.

I build my fictional worlds in concentric circles. The outer circle is the social, political, religious, economic and historical backdrop within which my story takes place. This needs to be dealt with lightly as it can easily overpower a story. The trick is to provide enough for readers who really like to get their teeth into the ‘history’ of the period, but not enough to weigh down readers who are more interested in the genre element: ie the mystery. I also try to use recognisable historical events and – at times – real historical characters that can help set the scene for the reader. In The Cairo Brief, Emmeline Pankhurst, Arthur Conan Doyle and archaeologist Howard Carter all make an appearance.

The next circle in will include the ‘props’ that the characters interact with – the vehicles, the food, the clothing etc, as well as the social mores and style of dialogue.

Finally, the innermost circle is the emotional core of the characters. This is the most speculative of the three circles as no one really knows what it felt like to live in a particular period. We can get glimpses of it through diaries and memoirs, but these still need to be filtered through our own emotional experience of what it is like to be a human being today. In the end that is what readers will connect with most: real, authentic human beings. 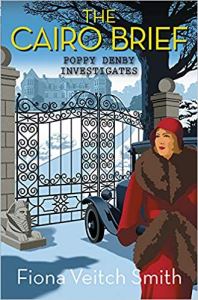 “I’ve heard all about you, Miss Denby. Everyone knows you have a nose for murder.” Poppy Denby is intrigued when she is invited to attend the auction for the Death Mask of Nefertiti. Held on the country estate of Sir James Maddox, a famous explorer, the auction promises to be a controversial and newsworthy affair. Representatives from the world’s leading museums are gathering to bid on the mask, which was discovered in Egypt. Poppy quickly sniffs out that the mask was not the only thing found that night: the underground chamber also contained a dead body. Poppy and her colleagues from The Daily Globe, who are trying to stay one step ahead of their rivals from The London Courier, dismiss rumours about the mask’s ancient curse. But when one of the auction party is murdered, and someone starts stalking Poppy, the race is on to find the killer before ‘the curse’ can strike again…

Many thanks, Fiona. Having written three novels featuring WWI, I can appreciate the perspective you want to bring to your novels. Best wishes for success with The Cairo Brief. Fiona appeared earlier on the blog discussing the magic ingredients that make historical fiction so successful.

Join 1,611 other subscribers
PrevPreviousWhat’s Unique about Hong Kong?
NextOvercoming the Fear of “Time and Place” in Writing Historical FictionNext