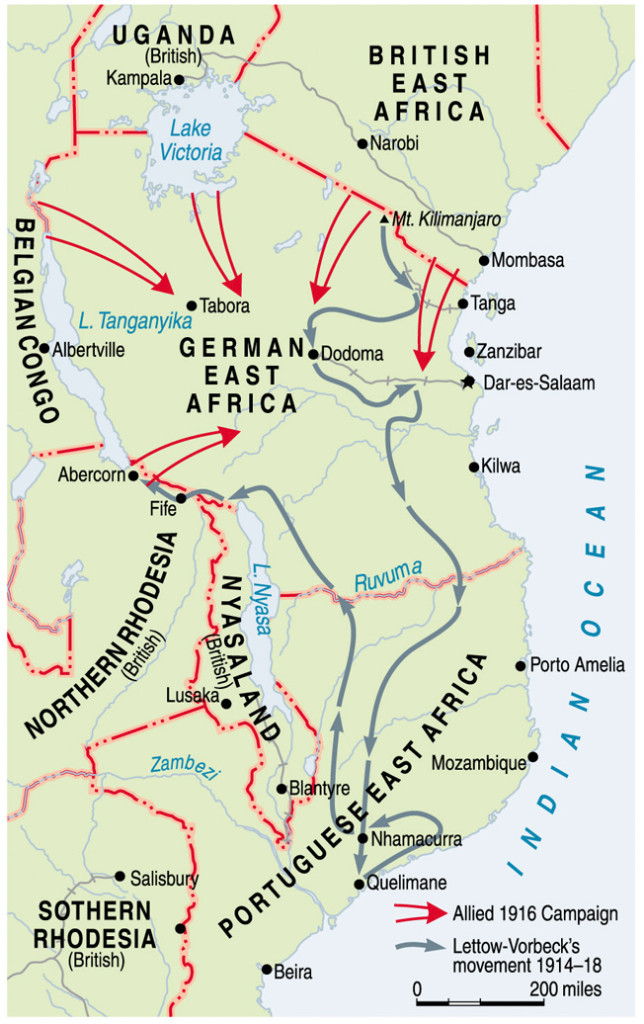 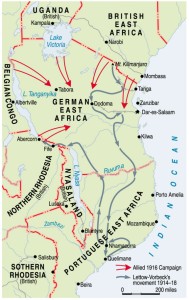 I have just received a big batch of your letters dated April and May [5 months ago] and have more or less digested all of your news. I am sorry to hear Maxwell Forsyth has been killed. His battalion, the 8th Gordons, if I remember rightly, was in our Division in France, although I never met him there.

The war seems to be r rapidly drawing to a close and we expect the momentous news of peace any day. Having started the fight the Germans are not waiting for their licking, but are getting out of the ring before he is knocked out. The latest news of our local friends is that they have got as fas as Northern Rhodesia, still a “fighting” force. [Map from warfarehistorynetwork.com. Red arrows show British attempts to capture von Lettow in 1916. Green arrows show von Lettow’s progress ending up in Northern Rhodesia.]

We are back at our old quarters in Ndanda, which you may remember from my letters earlier in the year, so that we are far away from the seat of trouble, but we shall probably get sudden orders that will send us streaking across the country to take up a strategic position somewhere.

The news from Europe however must surely have a depressing effect on von Lettow’s wonderful spirit and energy. He is a Prussian of the Prussians, but once the glamour of the Kaiser is removed I think he will see the futility of keeping it up.

I hope you are considering the ways and means of your annual holiday and hope you will have a good time, wherever it may be. In a sense the latter half of the campaign here has been something of a holiday, with alternate spells of strenuous campaigning and loafing. I have been keeping wonderfully fit, with no recurrence of the fever lately. I have one of Philip’s rare letters to acknowledge. [Philip was my husband’s grandfather.]

No danger for Henry at the moment.