Grateful for every day

My husband wanted an adventure vacation. “It’ll be fun,” he said, about a year ago as he showed me the website for a rafting trip down the Nahanni River located in Nahanni National Park Reserve. “Besides, we should see some of Canada’s north.” 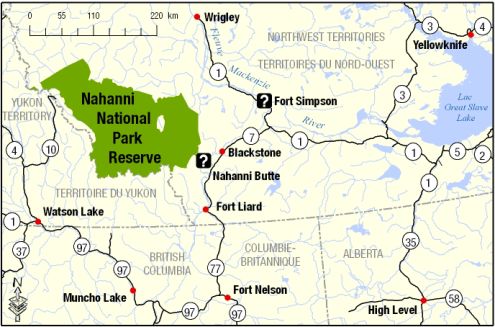 As you know, Canada is a vast country with huge swaths of unpopulated land full of pristine lakes, dense forests, wildlife, and windswept tundra. A land that supported our indigenous peoples for thousands of years before the French and English ‘discovered’ it. In the summer, the north is referred to as the land of the midnight sun. (I wore eyeshades every night on the trip to block out the light.)

You can think of the Nahanni area as Canada’s Grand Canyon, although the river bends and twists its way through the sheer canyons that frame both sides. On many occasions we stopped to consider those who travelled the river so many years ago, some of them going upriver rather than down as we did. At certain times of the year the rapids are fierce and dangerous from spring runoff but in August they were much more manageable.

On the way in, we took a float plane – a four-seater Cessna – from Fort Simpson to Virginia Falls which is twice the height of Niagara Falls. Although I’m not a good flyer (I get airsick even on large planes), I’d taken precautions and after the first few minutes, was able to enjoy looking down on the Mackenzie River making its way to the arctic and the land dotted with small lakes and winding rivers followed by the sharp peaks of the Mackenzie mountains.

Each day was spectacular. After early morning porridge and coffee followed by a proper breakfast around 8am, we broke camp and loaded our gear back onto the rafts with the help of three cheerful, skilled guides – Nils, Max and Eric. They rowed and steered us downriver, stopping for occasional breaks and a hearty lunch while we enjoyed the ever-changing scenery. At times we stopped to gather wood for the evening’s camp and cooking fires. When Nils found the night’s camping spot, we put up our tents, blew up the air mattresses, organized sleeping bags and other items while dinner was being prepared. 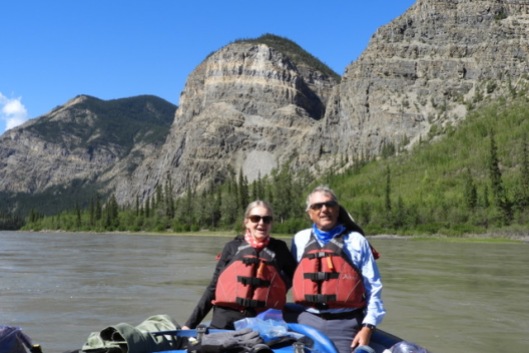 Our enjoyment came to a screeching halt on the last day. We arrived in a tiny town called Nahanni Butte where two planes were scheduled to fly us back to Fort Simpson. Along with the pilot, Ian and I, and Jeff, one of our fellow travellers, climbed aboard a different four-seater Cessna and within minutes we were trundling down a dirt runway preparing to take off.

Liftoff is always a mystery to me – how is it possible that a plane, regardless of size, can suddenly be airborne? But there we were that day leaving the ground behind with the whirr of the engine taking us up. When the plane banked suddenly hard and left, wings tipped at a precarious angle, I had only a moment of two to wonder why before we plunged to the ground. 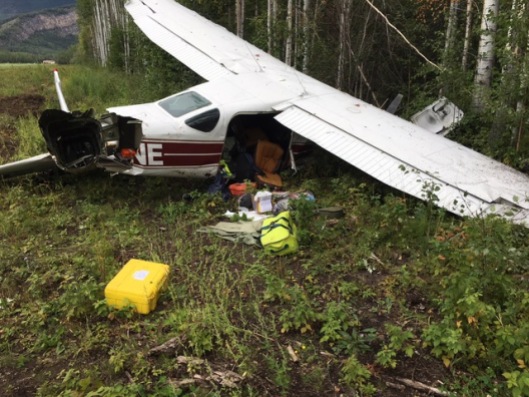 I screamed – who wouldn’t? – several times, but I can’t remember whether it was before we hit the ground or after or both. Suddenly, the pilot was asking if everyone was all right and urging us to get out of the plane. With blood streaming down my face, I scrambled across the pilot’s seat and took his hand to descend while my husband and Jeff emerged from the other side of the plane.

Several wonderful people helped us that day – a lovely woman called Marlene who ran the small health centre in Nahanni Butte; Kerry, Patrick and Christopher our medical evacuation team; the helicopter and air ambulance pilots who flew us first to Fort Liard and then to Yellowknife; Doctor Hannah Shoichet at Yellowknife’s Stanton Territorial hospital and the nurses – Laura, Paula, Stephanie, and Bovina; plus others whose names I don’t know.

Our daughter and son flew out to Yellowknife to help us make our way back to Toronto two days later, Ian nursing a very sore back and me with a totally bandaged head. (No, I won’t share that photo.)

We are eternally grateful for the miracle that kept all of us alive.