That Essential Element … For a Pirate by Helen Hollick

Helen Hollick has written a series of nautical Voyages based around her fictional pirate, Captain Jesamiah Acorne and his ship, Sea Witch, but her latest UK release in paperback is a non-fiction book – Pirates: Truth and Tales published by Amberley Press, which explores our fascination with the real pirates and those who are favourites in fiction. Today, she drops anchor for another interesting addition to her on-line two-week Voyage around the Blogs … over to you, Helen.

What would you regard as ‘essential’ for a pirate? A cutlass? A bottle of rum? A buxom wench? No. He needs a ship. Without a ship a pirate wouldn’t be a pirate he’d just be a thief – unless he had a horse, in which case he would be a highwayman.

Most pirates stole their ships, upgrading to something bigger and faster, or something a little more sea-worthy than their current one. They also did not appear to have much imagination when it came to re-naming their stolen prize as there were quite a few vessels named Ranger, Rover or Revenge. But when writing fiction we have the freedom to be a little more inventive. I named pirate’s ship Sea Witch because the lead female, Tiola, is a midwife, healer – and white witch.

I came up with the idea for an adult pirate adventure soon after thoroughly enjoying the first Pirates of the Caribbean movie, The Curse of the Black Pearl. It was enormous escapism fun. I wanted something similar to read, but couldn’t find anything: plenty of young adult, plenty of ‘straight’ nautical fiction, nothing with a charmer of a hero and a touch of fantasy written specifically for adults though. So I wrote my own. I had intended it to be a ‘one off’… I am currently writing the sixth voyage in the series, seventh if you count an e-book-only novella prequel, When the Mermaid Sings. 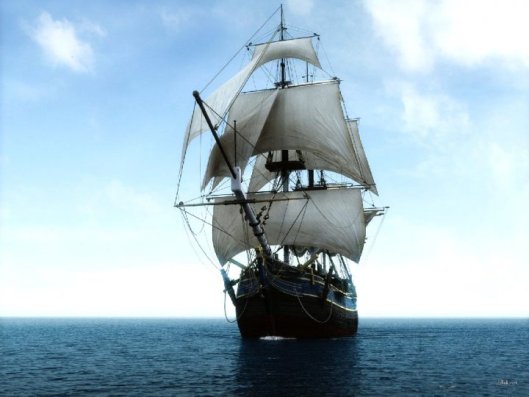 However, writing an adventure/fantasy yarn with strong characters and exciting situations for them to fall into and get out of relatively unscathed was one thing, creating the whole novel with that essential sense of reality, quite another. I did use ‘poetic licence’ with some historical dates here and there, but because I also included a touch of fantasy I needed to ensure the believability throughout. I did this by writing the nautical details as accurately as I could, thus blending fact (hopefully seamlessly) with fiction.

Problem. I have never been aboard a moving tall ship (the Cutty Sark and HMS Victory do not count!) Writers are so often advised ‘write what you know about.’ Which can be somewhat limiting, especially if you write historical fiction. Ah, but that is where the magic comes in: the skill of being able to travel through the mind to the world of Imagination where anything is possible. Although a hefty chunk of serious research helps.

I read all I could about anything that involved sailing tall ships: non-fictioon and fiction. I soon discovered that there are limits to using certain phrases such as ‘clew up there’, ‘ship ahoy’ and ‘weigh anchor’, so the imagination came into play for putting these phrases into different contexts and situations. Interestingly, I rarely came across ‘splice the mainbrace’ or ‘shiver m’timbers!’

To get the right feel of a ship, the sounds, the movement, the hard work involved (maybe fortunately, not the smells!) you cannot do better than watch that excellent movie Master and Commander. A brilliant movie about life at sea.

The craft of creating a good, enjoyable novel is to immerse your readers in the tale from the very first opening sentence, and then carry them on through a journey of wondrous adventure – be it in a novel of historical content, a contemporary romance, science-fiction, a mystery or thriller or whatever genre you prefer to write. It can be an amusing tale, a romantic one, a scary one, sad, nail-biting, thought-provoking – but every novel must be a doorway that opens into another world. Transporting a reader into that imagined place through creating a sense of believability is a wonderfully exciting thing to be able to do. And we, as authors, should thank the Muse every day for gifting us the ability to bring pleasure to our readers. And for helping us to bring such inspiring characters to life. © Helen Hollick

Many thanks, Helen. Wishing you lots of success with Pirates: Truth and Tales. I certainly enjoyed getting to know your favourite pirate in Ripples in the Sand!

It was a harsh life for those who went ‘on the account’, constantly overshadowed by the threat of death – through violence, illness, shipwreck, or the hangman’s noose. The lure of gold, the excitement of the chase and the freedom that life aboard a pirate ship offered were judged by some to be worth the risk.

Helen Hollick explores both the fiction and fact of the Golden Age of piracy, and there are some surprises in store for those who think they know their Barbary Corsair from their boucanier.

Everyone has heard of Captain Morgan, but who recognises the name of the aristocratic Frenchman Daniel Montbars? He killed so many Spaniards he was known as ‘The Exterminator’.

The fictional world of pirates, represented in novels and movies, is different from reality. What draws readers and viewers to these notorious rogues of the high seas?

What are the facts behind the fantasy?