Henry Tod’s letters home have an unexplained gap of more than six months and unfortunately, there is no one alive to ask for details. We’ll pick up the story in December 1916 and see what happens.

My dear Father and Mother,

I received your letters of 2nd December just half an hour before leaving London. We embarked today but there is the possibility of our not sailing before Christmas. This is a splendid ship, almost the latest addition to the fleet, and there is a full complement on board. Further than that I suppose I must not say.

Came down from London last night and what a bustle it was getting on the train at Paddington. There were hundreds of us on this train alone for the same ship, which is taking troops to the various fronts in the east, via the Cape and India, and everybody had a goodly supply of kit. It was very much the same at this end and I have just been putting in a very strenuous time lumping my kit on board, as it was hopeless trying to get anyone to do it for you.

The same [I think he means his kit] comprises 2 cabin trunks, 2 wooden cases, 1 valise, 1 tin box containing pith helmet and my gun case. [I love finding details like this when I’m writing a story – adds such a ring of authenticity.] I bought a sporting rifle and shot gun, and this together with my service rifle and revolver, should surely account for something. I am thinking more of sport than Germans this trip, wherever that may be.

I am sharing my cabin with a man, also from a Scottish regiment, who has been serving in Egypt and also bound for East Africa. He seems to think the climate in E.A. will be more salubrious than Egypt, but I ha’e ma doots. It is possible that the destroyer on which young Noel Grabowsky is a lieutenant and presently in these waters, will form part of our escort.

I left them all well at Stirling. I think I told you that Chris has put herself on the active service list and expects to go overseas shortly. I took a run out last week-end to Norwich and saw cousin Lizzie, now Mrs Dr. Colonel Ogston, and they seem to be enjoying life pretty well. There was quite a dinner party followed by a visit to the theatre.

Wilson’s peace proposals arrive when I was in London, but no one seems to appreciate his interference and we all feel the same about it. It is time the Americans realised what we are fighting for but that seems to be beyond people of their kidney. [I didn’t make that up!!] Shall probably let you have another line before sailing.

Well, now we know … he’s on his way to East Africa. So that resolves the question of his wounds. But what will happen there?

I found this introductory comment about the East Africa campaign – a diversionary tactic by the Germans – on a site called The Centre for Hidden Histories.

“The Campaign in East Africa during the First World War was of a totally different kind to those on the Western Front, fought over immense distances without roads, over unexplored and unmapped areas, in deadly swamps and on remote mountains, in a tropical climate where malaria was rife. One of the more extraordinary aspects of this extraordinary campaign was the number of different ethnicities and cultures that were involved.  Sikhs, Punjabis, Arabs, West Indians, Nigerians, Rhodesians and South Africans (both black and white), Sudanese, and members of many East African tribes fought side by side in the Allies’ comparatively small army.”

Apparently, in 1916 the campaign required reinforcements.

And here’s a map from Wikipedia showing Africa at that time. Attribution: By Professor Delbruck, Public Domain, https://commons.wikimedia.org/w/index.php?curid=778443 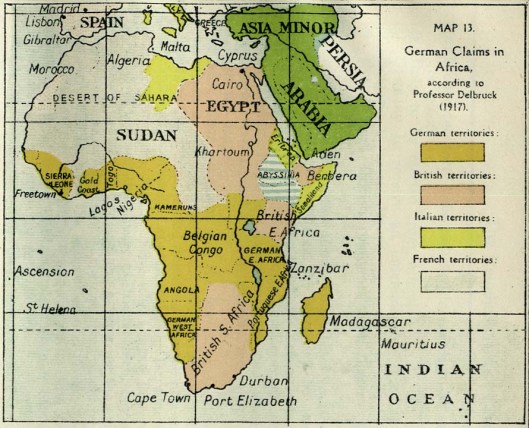 And here’s an article offering a perspective on Woodrow Wilson’s 1916 peace proposal, which many referred to as ‘peace without victory’.

PrevPreviousSomewhere in France – 28th May 1916
NextRMS Walmer Castle – January 1917Next