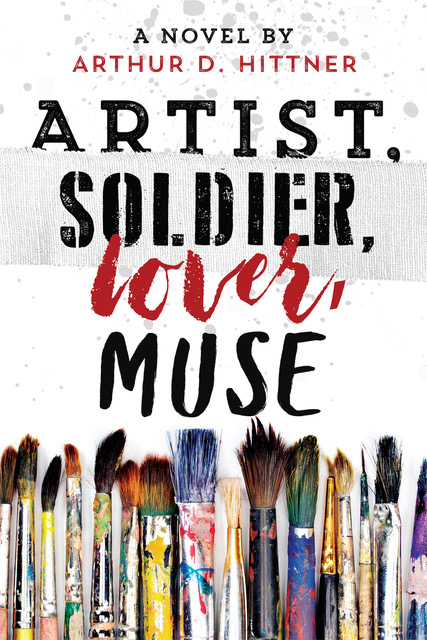 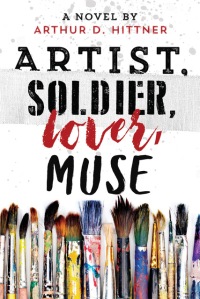 Arthur Hittner and his wife are longtime collectors of American art of the Depression era. To share his passion for the topic he’s written an intriguing novel ARTIST, SOLDIER, LOVER, MUSE set in the New York City art world of the late Thirties.

A large wooden crate arrived on my doorstep on a winter morning in early 2006.  Inside was the painting Eventide, a 1936 work by the artist Harold J. Rabinovitz (1915-44), a poignant depiction of a crouching young mother in a rose-colored dress clutching her naked infant, the child looking out the open doorway at the approaching figure of his father, a lunch pail in his hand, an expression of exhaustion on his face.  As a collector of American paintings executed during the Great Depression, this 1936 work was irresistible, though I’d never before heard of the artist.  That so talented a painter could have gone unnoticed for much of the seven decades since Eventide’screation mystified me—and motivated me.

Years later, I self-published a brief biography and catalogue raisonne, At the Threshold of Brilliance: The Brief But Splendid Career of Harold J. Rabinovitz (The Rabinovitz Project, 2014; rev. ed., 2017).  I’d traced the living descendants of the artist, determining that the bulk of his output resided in the attics and basements of his nephews and nieces, and in the vaults of an art museum in Springfield, Massachusetts. I viewed and photographed the collections of the descendants and the paintings in the museum. Many were brilliant works, very much the product of the times in which he painted: a blind beggar in a subway car, his hand turned upward in supplication; a jobless man on a curb, his face etched with dejection and hopelessness; an old woman, clad in rags, selling pretzels outside a subway station. Along with the paintings, I’d gained access to an old scrapbook that had been lovingly maintained by the artist’s parents. Inside were yellowed newspaper clippings from the Thirties and early Forties, chronicling the young artist’s triumphs and later, his tragic demise.

Not surprisingly, no market exists for a biography of a long-forgotten artist, however talented. Except for the Frick Art Reference Library and the Yale University Library (where Rabinovitz obtained his degree), I could count the proud possessors of the fruits of my labor on two hands.

But no matter.  I wrote that book out of a compulsion to discover the story behind my painting. Yet I learned much more: I’d become immersed in another time and place—the New York City art world of the late Thirties, a metropolis teeming with struggling artists, many surviving on meager paychecks from government-sponsored artist support programs. At some point I had an epiphany. I realized that I could share this world with a wider swath of readers by turning to historical fiction.

Inspired by the life I’d just documented, I created my own young artist, Henry J. Kapler, placing him in the heart of the world I’d uncovered in my research. Buoyed by further research and honed by an endless succession of drafts, Artist, Soldier, Lover, Muse (Apple Ridge Fine Arts Press, December, 2017) was ready for publication.

Henry J. Kapler is not Harold Rabinovitz, although their lives share a number of salient facts, a common timeline, and even some of the same artworks. Henry is a figment of my imagination, as are his thoughts, desires, motivations, quirks, and foibles. Beyond this, I sought to portray the world in which Henry resides, the New York art world of the late Depression, including the artists, athletes, politicians, events, and institutions that contributed to the rich history of the period, with as much historical accuracy as possible.

In tackling historical fiction, one often uncovers little known characters and facts that prove the adage of Mark Twain that truth is stranger than fiction. In seeking a villain, an author could have done no better than New York Yankee outfielder Jake Powell, whose on-field belligerence was the perfect resume for his violent encounters with Alice and Fiona, the two women in Henry’s life, and whose ill-fated radio interview in 1939 and the events that followed are little-known footnotes in the shameful history of segregation in professional sport.   Similarly, the saga of “Bunny” Taliaferro, the gifted African-American athlete from Henry’s hometown of Springfield, Massachusetts and target of a 1934 racial incident in Gastonia, North Carolina, seemed a natural inspiration for Henry’s imaginary masterpiece, Gastonia Renaissance.

Scores of artworks make at least a cameo appearance in Artist, Soldier, Lover, Muse. Paintings by artists other than Henry Kapler are works that might have been seen by a young artist in New York City at the time. Some are monumental murals that still adorn important buildings in New York. The paintings attributed to Henry are about evenly divided between purely fictional creations and works painted by Harold Rabinovitz, although the inspiration behind all of Henry’s paintings, as well as the details of their creation, derive solely from my own imagination.

As many writers of historic fiction will attest, it is a delight to experience the will of the characters we create. They gradually assume their own personalities, dictating their actions in ways that are often serendipitous. Artist, Soldier, Lover, Muse became their story, and the journey on which they took me was gratifying, mystifying, illuminating and, at times, heartbreaking. I invite you to share the journey.

What an intriguing story, Arthur. You’ve given us a great insight into the spark that lights historical fiction.

Artist, Soldier, Lover, Muse by Arthur Hittner – Freshly graduated from Yale, Henry J. Kapler parlays his talent, determination, and creative energy into a burgeoning art career under the wing of painters such as Edward Hopper and Reginald Marsh. The young artist first gains notoriety when his painting of a symbolic handshake between a young, African-American baseball player and his Southern white rival is attacked by a knife-wielding assailant while on display at the Corcoran Gallery in Washington. Yet even as his art star rises, Henry’s personal life turns precarious—and perilous—when his love for Fiona, a young WPA muralist, collides with his growing attraction to the exquisitely beautiful Alice, an ex-chorus girl who becomes his model and muse.  Alice is the girlfriend of Fiona’s cousin, Jake Powell, the hotheaded, hard-drinking outfielder for the New York Yankees baseball club whose jealousy explodes into abuse and rage, endangering the lives of all three.  While Henry wrestles with his hopelessly complicated love life, he also struggles mightily to reconcile his pacifism with the rabid patriotism of his Jewish-Russian émigré father.  As war draws near, Henry faces two difficult choices, one of which could cost him his life.