Harald Johnson brings us his take on transporting readers in time and place. In his novels Harald builds the world of 1609 and the early days of what we now know as New York City. He’s lived in Paris and speaks fluent French, worked in Hollywood as an art director, and published magazines. Harald also launched and ran a marketing communications agency in LA. Quite the career!

Transported in Time and Place – by Harald Johnson

The final motivation for writing and publishing NEW YORK 1609 came in the mail from my mother. It was an old family photo album; the kind with the black pages, white ink captions, and those little black-and-white photos with the scalloped edges. For some reason, I had placed it next to a binder of my old swimming accolades, and it now struck me: When I had swum around the island of Manhattan in 1983 as part of a swim race, I was swimming over the exact spot where my family had arrived (with me as a child) on a ship from Germany in 1953 to start a new life. And this was also the very same location Henry Hudson encountered in 1609 when he arrived with his Dutch-Anglo crew seeking a new water passage to the Orient. The parallels were just too hard to ignore. 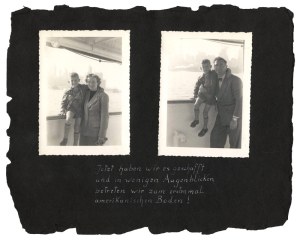 Photo: Arriving in NYC in 1953. That’s me in traditional lederhosen and knee socks with my Mom and Dad. My mother’s written description reads (translated): “Now we’ve done it, and in a few moments, we’ll step for the first time on American ground.”

I had already decided that I wanted to write a historical fiction novel in the style of James Michener or Ken Follett (two of my favorite HF authors), and had played around with different concepts, including one involving New York City, a place I had visited many times over the years. But nothing really clicked until I made the connection between my own history and that of the city itself. It seemed we were solidly tied together. It was time I took action on this idea.

The first thing I did was to locate and read the historical novels about NYC that already existed. And oddly enough, I could only find three that covered this early- to mid-17th-century time period. And none of them started at the beginning, which in my mind is clearly 1609 with Hudson. So I was determined to be the first.

After reading all the nonfiction history books about NYC I could find, my last step was to make another trip to The Big Apple to meet with history experts and to basically verify the research I had already done from a distance (and from my memory). This trip also included finalizing the licensing of the amazing image you see on the cover of the book. It’s a computer simulation of what Manhattan would have looked like on September 12, 1609—the day Henry Hudson and his crew sailed to it.

And most importantly, this final visit would help me get one last “look and feel” for my setting. My characters would be living and spending their time in and around the rivers, sounds, and straits that are such an important part of what New York is, so I had to re-experience that for myself, both on land and water (I didn’t swim this time!). I wanted to watch the sun as it arced through the sky, listen to the gulls wheeling overhead, touch the gnarled bark of an oak tree, smell the rotting of seaweed, and, yes, taste the water’s brininess (NYC is situated in a tidal estuary). In other words, I wanted my readers to really feel like they had been transported, in both time and place.

Here’s a small excerpt from the novel to give a sense of place and of the time period:

“Hudson spent each morning tasting the water for its saltiness. He used an empty bottle partially filled with small stones for weight, which he tied to a long rope and flung over the side. The presence of salt far up the river suggested he wasn’t sailing on a river at all but, rather, on a fjord or strait, which to him could only mean one thing: this channel connected to a saltwater sea. The South Sea. The Orient. So far, there was a fine taste of salt in his mouth in the mornings.” 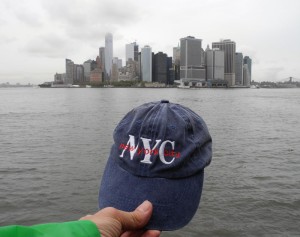 PHOTO: Here I am on Governors Island judging the distance across to Lower Manhattan in bow shots. It’s five, and it’s in the book!

For me, there is nothing better than standing in an important historical location and imagining what it was like before. Sometimes long before. In my case, I would travel to New York City again and again, and on each trip, I’d stop and stare at the waters encircling Manhattan. And think back to the day I was treading water at the island’s tip, waiting for the ebbing tide to change, and looking up to wonder: What was this place like at the beginning? I mean, what was it REALLY like? And how did things get to be the way they are today? Imagining the answers to those questions helped inspire me to write the story told in—and transport readers to—NEW YORK 1609.

PHOTO: Standing at the tip of Lower Manhattan, this is the view—minus the Statue of Liberty above my right arm—the native Manahate band would have had as a strange ship carrying strange beings sailed into New York Harbor in September of 1609.

When a Native American (Lenape) boy joins Henry Hudson’s expedition up the river that now bears his name, the fearless and visionary–and misunderstood–Dancing Fish doesn’t realize his entire world and way of life are in peril. Enthralled at first by these strangers, he begins to discover their dark and dangerous side, touching off a decades-long struggle against determined explorers, aggressive traders, land-hungry settlers, and ruthless officials. If his own people are to survive, the boy-turned-man must use his wits, build alliances, and draw on unique skills to block the rising tide of the white “salt people.”

Many thanks, Harald. I can vouch for the authenticity Harald brings to this novel and I’m sure readers will be delighted to experience that long ago time.

7 thoughts on “Transported in Time and Place by Harald Johnson”