While writing Lies Told in Silence, I created a scene with my characters arriving by train in a small village in northern France and conceived the idea that someone would drive them from the station to their destination. The time is 1914. War between France and Germany is a distinct possibility. The women of the Noisette family, including Helene, the main character, as well as the youngest son are leaving Paris in case the German army invades.

A car, I thought. I need some sort of vehicle to suit the era – a French one would be ideal. I searched various websites, clicking here and there on photos that caught my imagination. Suddenly, there it was: a red Tonneau with just the right blend of style and uniqueness. Not only was it quirky but it fit my notion of the woman who originally owned it – a fiercely independent woman who’d never married but had had many relationships, particularly with one or two of the impressionist painters of the time. And here’s how that vehicle made its entrance in Chapter 6.

On a hot June day, humid air pregnant with rain, their train drew into Beaufort. The screech of metal brakes, hiss of steam and loud cry of a lone conductor marked their entrance. No grand hallway bustling with porters and echoing with footsteps greeted them. No marble arches, no vendors selling croissants, no shoeshine men, no newsboys yelling the latest headlines. In fact, no one at all except a dishevelled driver waiting next to an automobile, the likes of which Helene had never seen.

“How will the six of us fit into that?” Helene’s mother said with a dismissive wave of her hand.

“Oui, Monsieur.” The man chuckled. “I’m sure I look much older than the last time you saw me. Madame Lalonde asked me to meet the train.”

Papa had inherited the Beaufort property when his maiden aunt died six years earlier, and Madame Lalonde, who oversaw Tante Camille’s house, had prepared it for their arrival. But who was this man? Whiskered, angular, bow-legged, an Adam’s apple that bobbed every time he spoke, the man looked nothing like the drivers they used in Paris. Helene knew it was rude to stare, so she shifted her gaze to the pile of suitcases and boxes they had brought with them and began to count.

“If Monsieur will agree, I think it best for me to take passengers first and return for your baggage.”

“Hmmm. You’re right. We haven’t a hope of fitting everything in. What sort of automobile is this?”

“Tonneau, Monsieur. Built in 1903. Your aunt was very proud of it. God bless her soul.”

Papa walked all around the vehicle. The Tonneau was red, the colour of ripe cherries. And it had no roof. Instead, it looked like a fancy horse-drawn carriage without the horse. On the driver’s side, a large bulbous horn sat ready to clear the way with a purposeful squeeze, and the polished wooden handle of a steering stick protruded where the driver would sit. Brass-encased lanterns were mounted near the front wheels, and large wicker baskets were strapped to either side. Crude metal springs, positioned above the rear wheels, promised passengers a modicum of comfort.

“Was it always red?”

“Always, Monsieur.” Gaston held out his hand first to Helene’s grandmother and then to her mother, assisting them into the backseat. Helene scrambled in after the two women while her father and Jean sat next to Gaston. “We had best go before it rains,” he said.

The Tonneau makes several appearances in the novel. Here’s another view of it from the front. 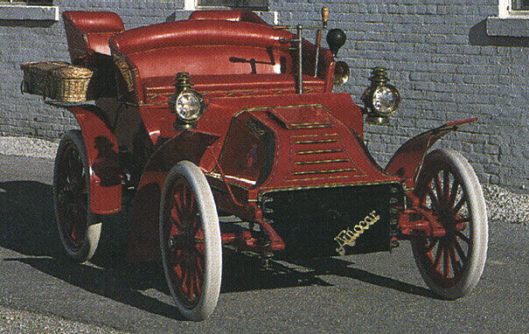 When I see photos like this, I’m transported back to an era where women carry parasols and wear long flowing dresses; where men have top hats and fancy walking sticks; where dinners are formal events and society imposes strict rules of behaviour on every class of people.

If you’ve read Lies Told in Silence, please consider posting a review on Amazon or Goodreads.

13 thoughts on “An antique car takes you unexpected places”