The Perfect Town for a Cozy Mystery – Dianne Ascroft 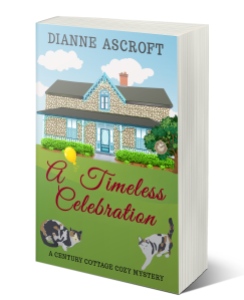 Dianne Ascroft and I met at a Historical Novel Society conference in London a few years ago and got on so well we’ve remained in touch despite living on separate continents! Dianne writes historical and contemporary fiction, often with an Irish connection. Welcome, Dianne.

The Perfect Town for a Cosy Mystery – by Dianne Ascroft

There are some places that just linger in your mind. Something about the atmosphere of a particular location grips you. For me that spot is Fergus, Ontario, Canada, one hundred kilometres northwest of Toronto. It first captivated me almost forty years ago, and last summer I realised that I had to share it with my readers.

I first visited Fergus in the early 1980s. The Fergus Highland Games (now the Fergus Scottish Festival and Highland Games) is held at the beginning of August each year and, for nearly a decade, I competed in the pipe band contest with the band I belonged to. It was always an amazing day as the town’s Scottish heritage came to the fore. The air was filled with the skirl of bagpipes and the rattle of the drums, and there was a sea of tartan everywhere: from kilts to picnic blankets to car stickers. This yearly event linked the quaint town with fun and excitement for me.

At the beginning of this century, I became a regular visitor and got to know the town a bit better when my mother went to live in the local nursing home. I discovered the townspeople’s sense of community: a sense of responsibility and caring towards each other that I hadn’t known in the huge city where I grew up. When I visited, I pushed my mother’s wheelchair along the peaceful banks of the Grand River, greeting other walkers we passed, and at a nearby diner where we ate lunch, the waitress always remembered my mother’s order.

After I left my mother each day, I wandered along St Andrew Street East, the main thoroughfare, stopping at the squat, stone Carnegie Library to use the computer, and leisurely browsed in the bookshop and numerous craft shops along the same street. I also wandered into the old-fashioned clothing store with its wood panelled interior and the market, housed in a barnlike building beside the river. In the evenings, as the air cooled and the sun sank lower in the sky, I strolled along residential streets shaded by mature oak, beech and maple trees admiring the traditional stone architecture of the houses. After being a city girl all my life, I really enjoyed being in this small, welcoming place.

For the past few years I’ve written Second World War fiction, set in Northern Ireland. Then last summer, I decided to have a change of pace. I had an idea for a mystery series, Century Cottage Cozy Mysteries, and knew that Fergus would be the perfect setting for it. Part of the enjoyment of reading a cozy mystery is losing oneself in a pleasing setting. Fergus, as I remember it, is the perfect place to evoke this response. I fictionalised the town as Fenwater and changed some details, but many places in A Timeless Celebration, the first book in the series, closely resemble Fergus as it was during the 1980s.

In the novel, I use ‘place’, or the setting, as an atmospheric backdrop to the plot, and to reflect the main character Lois Stone’s emotional journey as she adjusts to life as a widow, coping with the challenges she faces in her new life and home.

In the opening chapter, the reader meets Lois and begins to get a sense of who she is from her reactions to her new surroundings. Lois has recently moved to Fenwater and is adjusting to the move from the city to a small town. She has bought an historic house in the Ontario Cottage style known as a century house, a traditional style of the region, and is settling in and reflecting on her new life:

Raggs took mincing steps toward the hallway and stopped at the door. Lois stood up and followed the cat. She opened the door and let her hand trail across the wide, dark wood architrave that surrounded the doorway. All the doors in the house were framed with architraves, which had a simple parallel line design running the length of the wood with ornate carving in each corner of the frame. The style was repeated in the window architraves, and she loved it. With the age-darkened architraves, window frames, floors and skirting boards, she felt like she was living in an old, welcoming library. What could be better for a semi-retired librarian? Combined with the furnishings she had chosen to either bring with her or buy, she was sure she had created an atmosphere that would make her love this house. It would take time to adjust to leaving the city but this house would sure help her to settle in. She didn’t regret buying it.

Lois hesitantly begins to meet the town’s residents and inadvertently gets involved in helping to solve a crime. I weave details about buildings and other locations she visits into the story to reveal Lois’s internal struggles as well as to create for readers the kind of place where they would like to be.

In the second chapter, Lois has reluctantly accepted her best friend’s invitation to attend the opening ceremony for the town’s Sesquicentennial Celebration Week and her reaction to the venue where it is held reveals her insecurities as she faces this new social situation:

Lois parked in the large parking lot and walked around to the front of the building. Oatka Museum and Archives was conveniently located halfway between the sister towns of Fenwater and Alderton almost three miles from each of them. Lois took a deep breath as she climbed the two long flights of steps to the Museum entrance, feeling the heat of the sun as she climbed. Looking up at the light grey stone, two-storey building, its Italianate-style architecture reminded her of a Victorian orphanage or even poorhouse, which it had been originally. But, despite its gloomy beginning, she found the Victorian building’s architecture reassuring: stable and familiar as if it were somewhere she already knew. She still wasn’t sure that she was ready to start mingling with the other residents of the town but Marge had insisted that she come. She couldn’t disappoint her. So, despite her unease, at least the building made her feel welcome.

At the top of the flights of stairs, she opened one of the huge, double wooden doors and stepped inside, squinting as her eyes adjusted to the dim interior. The large foyer with its pastel blue walls and black patterned tiled floor immediately made her feel cooler than she had been a moment before out in the blazing sun.

As I have mentioned, fans of cozy mysteries want to be transported to appealing places, so as well as using the setting to reveal information about the character and the story, it is important to create a place that beckons readers to step in and stay a while. That’s what I’ve endeavoured to do in A Timeless Celebration and I hope readers will enjoy it.

I’ve finished writing the novel and am running a Kickstarter campaign to raise funds to edit and print it. For more information about A Timeless Celebration and my Kickstarter campaign, please visit the campaign page. The campaign ends on May 25th. Here’s the link: https://www.kickstarter.com/projects/1073238739/a-timeless-celebration-a-century-cottage-cozy-myst

Wishing you great success, Dianne. I can see Fenwater already!

Dianne Ascroft’s series The Yankee Years is a collection of Short Reads and novels set in World War II Northern Ireland. She’s also written an historical novel Hitler and Mars Bars. She recently began writing the cozy mystery series, Century Cottage Cozy Mysteries. an historical novel, Hitler and Mars Bars. Dianne lives on a small farm, in the western region of Northern Ireland, with her husband and an assortment of strong-willed animals. When she’s not writing, she enjoys walks in the countryside, evenings in front of her open fireplace and folk and traditional music.

A Timeless Celebration by Dianne Ascroft – When an artefact from the Titanic is stolen before her town’s 150th anniversary celebration, it’s up to Lois Stone to catch the thief. Middle-aged widow Lois has moved from bustling Toronto to tranquil Fenwater and is settling into her new life, feeling secure away from the dangers of the city. Then two events happen that shatter her serenity: her house is burgled and an antique watch belonging to a Titanic survivor is stolen from the local museum. Her best friend, Marge was responsible for the watch’s safekeeping until its official presentation to the museum at the town’s 150th anniversary party and its disappearance will jeopardise her job. Lois won’t let her friend’s reputation be tarnished or her job endangered by an accusation of theft. She’s determined to find the watch in time to save her best friend’s job and the town’s 150th anniversary celebration.