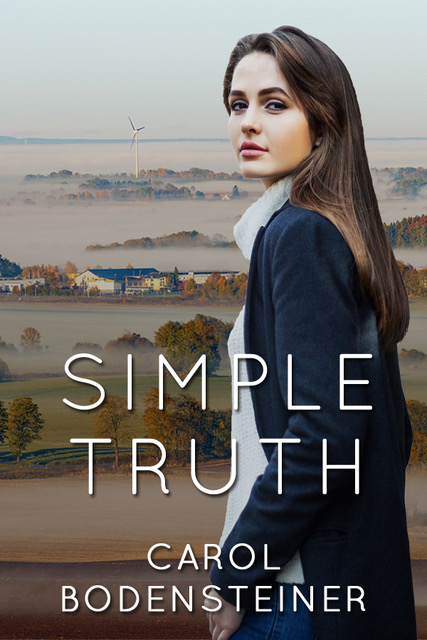 Thanks, Mary, for inviting me to join your discussion of time and place in writing. As a reader and a writer of memoir and historical fiction, I know that when the author ‘gets it right,’ time and place take on the qualities of another character.

Place shapes the way people think about themselves, it frames their actions. Place can be friendly or hostile, welcoming or menacing, relaxing or high stress. Place can be all of those, sometimes at the same time.

My newest novel Simple Truth is contemporary fiction set in a small Iowa town that is home to a poultry packing plant. Place is equally important in this genre.

Simple Truth is the story of a young woman who gets a career-making opportunity only to discover her client may be exploiting immigrant workers. With each new revelation, she finds herself questioning not only her client but also herself and her career. Ultimately, she must answer: What is she willing to risk to help someone else?

Research helped me flesh out the ‘character’ of both town and plant.

To understand the town in my story, I spent time in a similar town, walking the streets, eating in the restaurants, watching the people. My experiences played out in Simple Truth as my main character, a young woman who lives in the state’s capital city explores the small town where she’s taken a temporary work assignment. Here’s some of what she sees:

… Angela counted at least four paint colors peeling around a store window displaying christening and quinceañera gowns. The awning shielding one store window from the setting sun drooped sadly to one side. Sheets of paper covered another store’s windows. None of the storefronts looked welcoming, and Angela did not go into any of them. Stopping to read the posters in one window, she found announcements of bands and dances hung side by side with a flyer listing indications of abuse and encouraging women in dangerous relationships to seek help.

Angela perceives the town as run-down and dreary, a place she needs to be but would never choose to stay. As she comes to know the town better, she understands there’s more here than meets the eye. That first impressions don’t always yield the real story.

In addition to the town itself, the other most significant location in the story is the poultry packing plant. To create this location, I relied on my own experience with such facilities and YouTube videos. Since the people of color who work in the plant are an important focus of the story, I spent some time describing the plant operation as my main character sees it during her orientation tour.

The work that goes on in packing plants may be difficult for some people to stomach. Yet it is important to know the place to understand why people choose to work there. In the plant, as in the town, the situation is complex, made more so by the diversity of countries, languages, religions, and cultures represented.

While I didn’t pull punches in the plant description, I also didn’t dwell on it beyond the necessary. I hope. Readers will have to decide.

Place can be as complex as a human being, a complexity we may miss if we don’t look deeper.

Many thanks, Carol. Love the idea of place as a character.

Simple Truth by Carol Bodensteiner – Angela Darrah is a pro when it comes to pitching client stories to the media. But when she suspects her client is exploiting immigrant workers, she’s forced to face her own prejudices and to examine herself in ways she never imagined.

Having landed a career-making assignment at one of Iowa’s largest poultry packing plants, Angela is stymied when the CEO who hired her resists her advice. Worse, he defers her to his right-hand man who keeps Angela off balance as he alternately supports and obstructs her efforts. When Angela finds an unexpected ally in a handsome Salvadoran plant supervisor, her professionalism wavers in the face of undeniable attraction.

As Angela immerses herself in the company and the town, she is faced with challenges similar to the company’s immigrant workers. How will she navigate a new system and succeed in the face of obstacles and injustices she doesn’t understand? Then, when she discovers corporate actions that are unethical, possibly illegal, Angela must confront the conflict between her duty to her client and her growing passion to fight injustice. Ultimately, she must decide: What is she willing to sacrifice to help someone else? Simple Truth is a thought-provoking story intertwined with risk, retaliation, and reward.

Carol Bodensteiner is a writer who finds inspiration in the people, places, culture and history of the Midwest. After a successful career in public relations consulting, she turned to creative writing. She published a memoir Growing Up Country: Memories of an Iowa Farm Girlin 2008. Her debut novel Go Away Home was acquired by Lake Union Publishing, an imprint of Amazon Publishing and published in 2015. She published her second novel Simple Truth in 2018. Carol can be reached on Twitter: @CABodensteiner, Facebook, Goodreads or at her website.

4 thoughts on “Place – as complex as a human being”