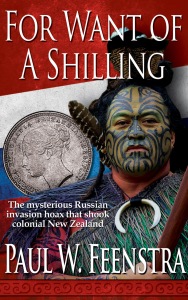 Author Paul Feenstra returns with a story about inspiration for his latest novel, For Want of a Shilling. Over to you, Paul.

After a rather nasty injury that saw me sofa bound for seven months, my doctor informed me it was time to get out and regain strength to my surgically repaired Achilles tendon. I needed no urging and immediately set out, albeit gingerly, and decided to walk around the bays in New Zealand’s beautiful capital city, Wellington.

What caught my attention was a driveway that wound up a hill; an ominous metal bar prevented vehicle access. Further discouraging the curious was a number of signs clearly alerting trespassers that the Commandant would be displeased, and threatened action taken by the New Zealand Defence Force for those who disobeyed his stern warning.

This isn’t the USA, I thought, this is New Zealand, what could they possibly do to me?

I saw this as an invitation and without hesitation hobbled up the driveway, although I half expected black-clad soldiers in body-armour to come rappelling down thick coils of rope from assault helicopters to blindfold and whisk me away. I wondered how I would ever find out if my lotto ticket was a winner, if I was imprisoned to rot in some undisclosed dank cell.

The sealed driveway curved up a hill with low growing coastal bush on either side until I reached the summit, and there, much to my astonishment, I found a series of old fortified military style bunkers on a flat expanse of land and a young couple having a romantic picnic on the grass beside one of the buildings. I felt some relief and no longer looked over my shoulder in fear of being arrested. In politeness, I left the miffed couple alone.

The cluster of graffiti covered buildings and fortifications looked old, certainly older than other bunkers I had seen around Wellington. During WWII, New Zealand built coastal defences in preparation for a Japanese invasion, but these buildings were vastly different.

Soon as I arrived home I began to investigate the fortifications and learned they were constructed in 1885, in fear of a Russian invasion.

“A Russian invasion, surely not!”

I’d never heard of such a preposterous claim, why on earth would the Russians want to invade New Zealand? – Apparently, they did.

After further research, I discovered the plans. Written in 1864, Russia had every intention of invading Australia and New Zealand. These resource-rich colonies had exactly what Russia needed.

The Crimean war in the 1850’s saw Russia’s navy tied up and useless in the Baltic. It was old and decrepit. The brother of Russia’s Tsar wanted to reform the navy but problems at home with the serfs meant that workers were on strike and factories weren’t producing. Where would Russia obtain the resources they needed?

In 1870, the Tsar’s brother and son departed for America to begin an extensive fact-finding mission. Certainly they wanted to learn about new technology, tactics and shipbuilding where they could incorporate into their own navy’s transformation and modernization. What caught their eye was the exploits of the Confederate ship, CSS Alabama.

In its short two years of service, the CSS Alabama had an extraordinary record of success. It burned 65 union vessels, and not one passenger or crew member on those ships was ever harmed. For the Russians, this represented a wonderful opportunity, and I had an idea for a novel.

Imagine if the Russians, by using the tactics of the CSS Alabama, launched a new and powerful warship, and then sent her into the South Pacific.

There was more to learn. In January 1873, New Zealand’s, Southern Cross Newspaper printed a story that detailed how a Russian warship entered Auckland’s main harbour, captured a British warship, kidnapped the mayor, held him for ransom and then looted the city’s coffers of all its money. On leaving Auckland, the Russian ship also captured a merchant vessel laden with New Zealand gold headed for Australia. The newspaper article also listed a few other extravagant claims.

A few days later, the Southern Cross printed another story admitting the first story was, in fact, a hoax. But was it?

I discovered more which made me think.

This newfound knowledge became the basis for an exciting new historical fiction novel titled ‘For Want of a Shilling’.

For Want of a Shilling by Paul Feenstra – In January 1873, New Zealand, is a sparsely populated coastal community on Wellington’s south coast, the peaceful lives of Owhiro Bay residents are shattered with the discovery of two brutal and senseless murders.

What begins as a local murder investigation turns into a plot of global proportions. From the political agenda of England’s Prime Minister, the Machiavellian son of Russia’s Tsar, to the famed exploits of America’s confederate ship Alabama. Intricately researched, the author uses many recorded historical events and people to weave a story of intrigue, conspiracy and greed.

3 thoughts on “The story behind For Want of a Shilling”