The Perfect Summer – not quite perfect 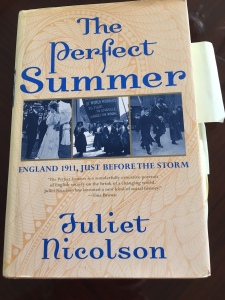 I reread Juliet Nicolson’s The Perfect Summer last week as research for my current WIP. This work of non-fiction “chronicles a glorious English summer a century ago when the world was on the cusp of irrevocable change … That summer of 1911 a new king was crowned and the aristocracy was at play, bounding from one house party to the next. But perfection was not for all. Cracks in the social fabric were showing.”

In chapter 6, I jotted a margin note – “parallels to today” – and thought I would share it to see what you think.

“In the summer of 1911 a schoolmaster from Farnham in Surrey named George Sturt was writing a book, Change in the Village, under the pseudonym George Bourne. It was based on conversations with his gardener, Bettesworth, which Sturt felt perfectly illustrated the problems the countryside was experiencing in adapting to the advances of the new century. Innate suspicion combined with inertia in the older generation inhibited change and caused deep distress. Many could not understand the need to alter a way of life that had worked well enough for centuries.

Farnham was a place where the names of different varieties of potato – the red-nosed kidney, the magnum bonus – were more famous and regarded with more revenence than the names of any politicians. The heath-land provided robust turf from which to cut sods for thatching, delicious warm smokey flavoured bread was baked in the cottage ovens, the bees in their hives produced plenty of honey, and the small plot of hops at the bottom of the garden provided all the beer a man could drink.

No one minded too much about personal hygiene, or that the men smelt of their cows, and there was usually enough water left in the well for washing. If it rained, it was ‘good for the ducks’; if a pig fell sick it was an opportunity for a big feast. The work was hard and relentless but, as Sturt realised, ‘patience and industry dignified the hardship’. Money was barely relevant since goods were frequently paid for in kind, and expenses were minimal as in general people were ‘wanting no holiday, independent of books and newspapers, indifferent to anything that happened farther off than the neighbouring town.‘

Above all, George Sturt concluded that the experience of living ‘dignified lives of simple and self supporting contentment’ meant that Bettesworth’s generation never knew what it was to feel unfulfilled …

Change was threatening this rooted contentment.”

Nicolson illustrates some of those changes:

England’s circumstances a little more than a hundred years ago seem to parallel changes that have occurred and continue to occur today.