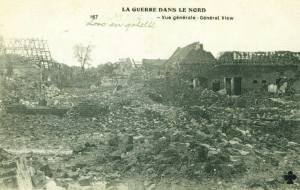 Continuing Henry Tod’s lengthy letter … if you recall his battalion is in the vicinity of Loos. This photo shows Loos after the 1915 battle.

In the big attack [he’s referring to 1915] we captured Loos and Hill 70 which lies just beyond, but were unable to hold the latter, and today our trenches run round in front of Loos on the lower slopes of the Hill. The Germans on the higher slopes dominate the position and the village is a death trap [no mincing of words here]. Some of the buildings are still standing and the two famous towers, but only just, and they form a fine target for the German guns. If you scuttle across a street you are sniped at – not with a rifle or machine gun, although they are there in plenty, but with a small field gun, or whiz-bang as they are called.

We were just to the right of the village, with our headquarters in a cellar in the village itself. The day after my arrival it come in for a very heavy bombardment from early morning till night. The 5.9 shells (high explosive) were coming over at the rate of one every six seconds. [Remember, he’s writing to his parents!] As it was getting dark they fired a mine in front of the village which went off with a terrific rumble and a dull red flame. It was short of our trenches, so it didn’t count. We thought this was the prelude to an attack on the village, but as night fell things quieted down to the usual display of fireworks in the form of star shells (light rockets) and the spasmodic rattle of a machine gun. This is a touchy part of the line and one has the feeling that the Germans will sooner or later make an attempt to recover their lost ground.

One night, or rather early morning at 2 a.m., I went out on my first reconnoitring patrol to investigate a sap which ran out from the enemy lines towards ours. I took three men with a good supply of bombs, as you never know what you might run into, and started off with a vague idea of doing something. The Colonel wanted a live prisoner amongst other things, which of course is a mere trifle. [Great sense of humour, our Henry.]

The trenches here are about 150 yards apart but from the lie of the land it is difficult to make out the formation of the enemy line. We suspected they were digging in this sap, and I had to verify its existence. It was a nice dark night but it had been raining and the grass and everything else was very wet. As you have to crawl on your stomach all the time you are out, you can imagine the result; wet through and covered with mud.

It took us over an hour to reach their wire entanglements and I found myself in the angle formed by the sap with their main trench, the sap being on my left and also well wired. It was weird and every time their flares went rocketing up we lay perfectly still with our noses buried in the wet grass hoping we hadn’t been spotted. Anything unusual on the ground had to be very closely watched before proceeding further.

I wriggled up to the wire protecting their sap and waited for some sign of life. I might have done some damage here as I was only a few feet from their sap but I couldn’t hear or see anybody. I moved along towards their main trench and presently heard voices and men moving about there, but I couldn’t get within 30 years of them because of the wire.

I worked along for a bit hoping to catch some stray Jerry out working on the wire, but no luck. I took general stock of the situation and then headed back for our own trenches. It is quite easy to get lost in No Man’s Land and I had to consult my luminous compass more than once. The opposing trenches are never just parallel to each other and wind about in the most bewildering manner. When you are out reconnoitring the men of your company are warned to keep a specially sharp look-out as are those of the adjoining Companies and they do not throw up light rockets to your discomfiture. However, we got back to our own line in much quicker time than we took to go out, although I felt a little disappointed that it ended so tamely, considering the possibilities.

Well, I must get this letter to a close somehow. Nothing particular happened until the day we came out and we were congratulating ourselves on getting out of this spell with practically no casualties. About midday however we got a most awful hammering from their artillery, just our Company front which was fairly extended. Our trenches were badly knocked in and we had 15 casualties, 5 of whom killed, including the Irish captain aforementioned. He was a nephew of Sir Edward Carson. Considering the severity of the bombardment we got off lightly. Our telephone lines were broken and we were isolated for a time.

We are now out for 6 days and the weather is fine, but the roads are in a dreadful state owing to the heavy traffic.

As always, I find these first hand accounts amazing. Almost makes me want to write another novel set during WWI. And a reminder, I haven’t read ahead so I’m finding out what happens just as you are.