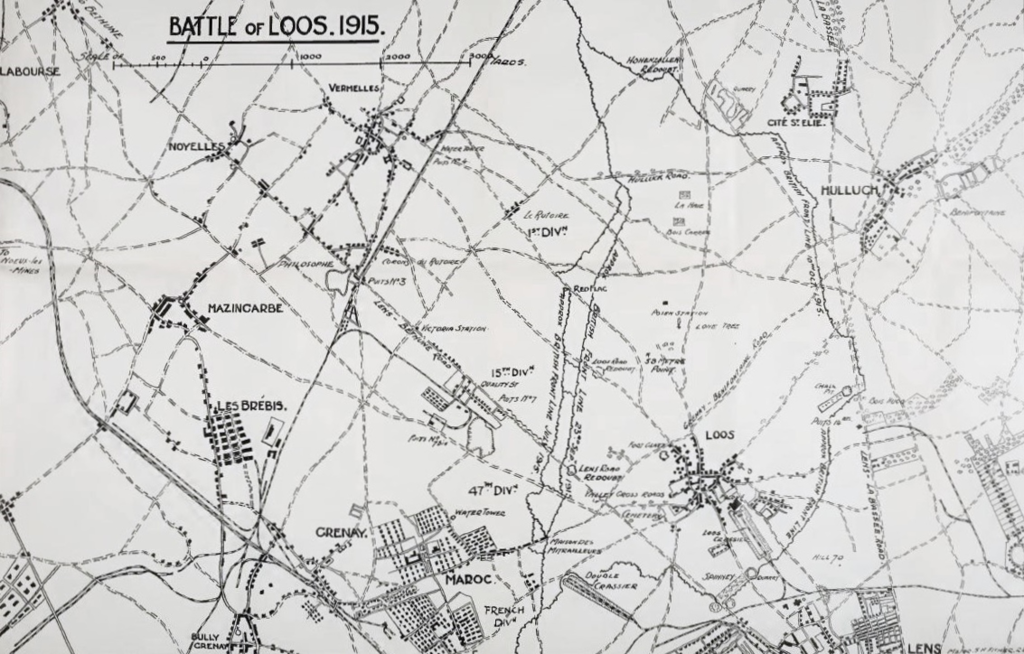 Henry Tod has been on leave and now he’s heading back for action in the vicinity of Loos. Loos was the biggest British attack of 1915 and the first time that the British used poison gas.

I left London on the Saturday morning and a few friends saw me off at Victoria. The departure of the leave train is a great occasion and the station is full of relatives and friends. Everybody is cheerful but there are many tears with the laughter. Got down to Folkestone about 11 a.m. and after we all had got on board, were informed that the boat would not cross that day. It seems that a submarine had made its appearance and rumour as usual was rife but I don’t know if anything really happened. A lot of shipping was hanging about near the coast and they had evidently been warned. Very willingly we disembarked and we put in quite a pleasant day at Folkestone, despite the inky darkness at night as of course all lights are forbidden.

We crossed next morning and the day was fine and calm. We were again hung up at Boulogne – at least some of us – as the train for my bit of the line was not starting until next day, and we cheerfully accepted our fate and made no complaints. The train left at mid-day and after the usual slow journey we got to rail-head pretty late in the evening where I spent the night.

Next morning got onto a branch line a little further on my way and then had to tramp it until I had tracked down our battalion transport base. Here I donned my war gear and learned that the battalion had gone up to the line the previous evening, in the vicinity of Loos, which I had noticed in the papers has been coming in for special attention from the enemy. The Division is now back on the ground over which they attacked in the great battle which started on 25th September, and resulted in the capture of Loos.

I went up that night with the ration party to guide me and eventually got to our “little clay home in the west” in time for the evening meal. I was glad to see my mess mates alive and kicking and of course we had lots to tell each other. It seems in my absence the Germans made a night attack on our bit of front. Our fellows were in reserve and were called from their billets to double up over the open, but services were not required as the Bosche had been driven back. In the bombardment preceding the attack a heavy toll was taken in the Division and several officers I knew have been killed, including three in Cockburn’s old regiment.

We had now our own trouble to think about and were in for an eight day spell – straight from leave! An Irish division had just been sent out but before going into the line as a division it was getting its baptism in small doses and detachments were scattered throughout our division, who are old timers by comparison. A company and six officers of the Connaught Rangers were with our battalion, a platoon and two officers of which were with out company. This access to the strength was very welcome, especially as their officers were able to take their spells of duty and give us longer reliefs. Our two guests were a typically Irish pair, with a brogue you could cut, full of fun and good spirits. One, alas, is no more, being killed yesterday afternoon by a shell, just before we were relieved, but of this later.

I think we’ll leave the rest of Henry’s long letter for another post.