WWI Fiction – Readers have their say

In preparation for a panel on WWI fiction, I conducted a brief reader survey a few months ago and thought I’d share the results.

It’s encouraging to see so many people reading novels set during WWI. Combining the first two responses gives us 91% indicating they’ve read some or many novels from this era. Women and men responded much the same.

With so many female participants, this result isn’t surprising. Men and women have different profiles – see the split below. 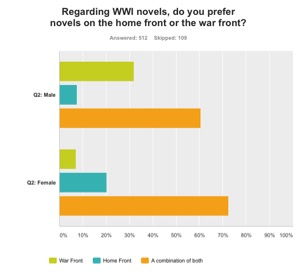 Next question – note than some of the response option text is cut short. You can see the full text in the male/female comparison which is also included.

In the ‘other’ category, we have a wide range of responses. Additionally, men and women have quite different points of view (see below).

What appeals to you about the WWI timeframe? Since this was a write-in question, answers were individually read and categorized.

It’s intriguing to see so many people refer to ‘changes that followed’. Many used the word pivotal in describing the changes that occurred. They said this in many ways, referring to social, technological, military, political, gender, and class changes, as well as the loss of innocence and the emergence of new values and mores. As for male/female, the only significant difference is an interest in the soldiers’ experience.

What do you think we can learn that’s relevant to today from novels set in and around WWI? This too was a write-in question; answers were individually read and categorized as shown below. 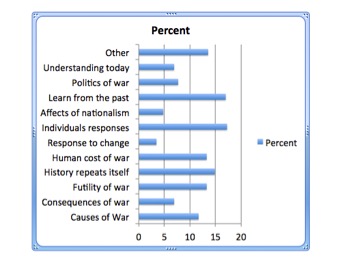 Note: ‘Individuals responses’ refers to readers’ interest in how individual men and women responded to the war itself – bravery, cowardice, camaraderie, willingness to serve, sacrifice and so on. Men are more likely to cite causes of war and politics of war. They are more likely to say ‘history repeats itself’ and less likely to think that we can learn from history.

One further question asked participants to mention favourite WWI fiction. I have yet to tabulate those results but will get back to you when I do!

As someone who loves WWI fiction and has written three novels set in this time period, I’m delighted to see the wide interest and relevance. I hope you all find the results of interest as well.