Canadians by the Sea by Clare Flynn 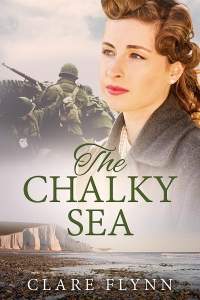 Clare Flynn has written historical fiction set in Australia, India and America as well as the UK. Clare and I connected the way people do these days – via social media – and discovered that we share a love of historical fiction as well as Paris. Can’t go wrong with those two interests in common. In addition, as you will see, Clare has an interest in Canadians involved in WWII which is also a topic near and dear to my heart. Clare’s latest novel The Chalky Sea released July 1, 2017.

Canadians by the Sea by Clare Flynn

I recently moved to Eastbourne, a small seaside town on the Sussex coast of England, best known as the butt of jokes about its elderly population, (in fact 70% of the population is under sixty). I lived here as a teenager and, because I love the sea and the Downs, decided to move back after years living abroad and twenty years in London.

During my school days, I knew nothing about the history of the town in World War 2 so when I moved back and discovered that it claimed to have been the most heavily bombed town in south-east England it was quite a surprise. One hundred and ninety-nine people lost their lives in the bombing raids on Eastbourne – one hundred and seventy-two of them ordinary civilians. The town was subject to raids throughout the war between July 1940, a month before the London Blitz began, until March 1944.

The first raids were doubtless intended to soften up the town ahead of Hitler’s planned invasion, Operation Sea Lion, which was intended to take place along the Sussex coast.

When the invasion was called off, Eastbourne saw no respite. Being just a short hop across the Channel, it was subjected to “tip and run” raids with bombers coming in low under the radar then, as they reached the coast, climbing up over Beachy Head to the Downs, banking and swooping down to attack the town before nipping back across the Channel.

Eastbourne’s other secret history is its connection with Canada. The first Canadian soldiers landed in Britain with the First Army in December 1939. These troops, mostly volunteers, as Canada did not use conscription, arrived off keen to see action, but most spent the first few years of the war kicking their heels, doing exercises and manoeuvres but seeing nothing of the enemy. To make matters worse, many of them were stationed in Aldershot, the British garrison town and not the most interesting of places.

In July 1941 Eastbourne experienced its first influx of Canadians. These soldiers were in the town to continue military exercises – but found themselves in more congenial surroundings than Aldershot. The cliffs, beaches and the Downs offered varied opportunities for exercises.

The arrival of the Canadian troops was not announced officially, although within a week or so, the local newspaper was already referring to “our guests”. The soldiers were stationed throughout the town, often occupying homes left empty by people who had evacuated Eastbourne during the threat of invasion and subsequently the bombing raids.

The presence of this high concentration of Canadian soldiers was another reason for the town being a bombing target, especially in the run-up to the catastrophic Dieppe raid. It is thought that there may have been intelligence leaked to the Germans about the forthcoming attack, as the town and particularly an area where numerous Canadians were billeted, was heavily bombed. The fateful Dieppe raid, in August 1942, Canada’s first significant action in the war, cost nine hundred Canadian lives in an operation that failed to deliver any of its objectives. The Canadians fought bravely – but were badly let down by a poorly planned operation that should never have been undertaken. Many of those who lost their lives there had earlier been billeted in or near Eastbourne.

Canadians were in Eastbourne in a continuous presence between July 1941 and the D-Day preparations of 1944. They spent their time doing exercises including scaling the cliffs, shooting on the firing ranges across the Downs, undertaking large scale exercises – sometimes with the Home Guard and practising tank manoeuvres. In between they made full use of the leisure activities available in the town. One hundred and fifty Eastbourne women moved as brides to Canada during 1946, according to the local newspaper. It’s actually surprising the number is so low, given that the Canucks swept 48,000 British women back to Canada after the war and many were stationed in Eastbourne for so long – but when they first arrived, Eastbourne was little more than a ghost town, fear of invasion and the bombardment causing all but essential workers and the most obstinate, to evacuate the town in 1940. The women who did remain had no shortage of willing partners at the regular dances at The Winter Garden.

My own interest was heightened when I discovered that many Canadians were billeted in houses in the area of the town where I live, Meads. There was an officers’ mess in one of the houses in my road and the soldiers gathered around the piano in both the local pubs, The Ship and The Pilot. A wall opposite The Pilot bears testimony to their defensive presence, as there are several embrasures cut into the brickwork – although I suspect the Home Guard were more likely to have created these as part of the coastal defence preparations in 1940.

Another clue to the wartime presence of the Canadian army is in the pavements (sidewalks) of Meads where I live. The original Victorian red brickwork is present on one side of the roads, while the other sides are made up of ugly concrete paving slabs. This rather odd arrangement traces to the destruction of the kerbs and pavements by Canadian tanks, which used to be parked on local roads overnight before being driven over the Downs on manoeuvres. After the war, the council undertook repairs but shared out the more expensive original red bricks among all the streets in an effort to be equitable.

The Canadians were also blamed for the near total destruction of Bel Tout lighthouse. This is not to be confused with the famous red and white striped lighthouse underneath Beachy Head. Bel Tout sits on the cliff-top near Beachy Head and was used as target practice by Canadian artillery, so that after the war it was little more than an empty shell. Bel Tout has proved resilient, as not only was it restored but it was raised on rollers and moved a couple of hundred yards back from the eroding cliff edge to prevent it toppling into the sea. It is now a bed and breakfast – and also famed for its star appearance in the BBC’s 1986 production of Life and Loves of a She Devil by Fay Weldon.

It was impossible to resist the idea of setting a book here. It was not in the plan when I moved, but within two months of arriving I had started writing The Chalky Sea. The book is set mostly in Eastbourne, but also in Aldershot, where numerous Canadian regiments were garrisoned throughout the war years, and a little bit in Ontario, Canada.

The book follows two individuals – Gwen an Eastbourne woman, alone and refusing to evacuate the town after the departure of her officer husband to an unknown destination for what we now know as Special Operations; and Jim, a young Canadian farmer, who joins up in a fatalistic effort to escape from a broken heart. The Chalky Sea follows their individual journeys and examines the impact of war on them and how it changes them profoundly.

Many thanks for sharing the story of Eastbourne in WWII, Clare. Best wishes as you launch The Chalky Sea.

The Chalky Sea by Clare Flynn – In July 1940, Gwen Collingwood drops her husband at the railway station, knowing she may never see him again. Two days later her humdrum world is torn apart when the sleepy English seaside town where she lives is subjected to the first of many heavy bombing attacks.

In Ontario, Canada, Jim Armstrong is debating whether to volunteer. His decision becomes clear when he uncovers the secret his fiancée has been keeping from him. A few weeks later he is on a ship bound for England.

Gwen is forced to confront the truth she has concealed about her past and her own feelings. Jim battles with a bewildering and hostile world far removed from the cosy life of his Canadian farm. War brings horror and loss to each of them – can it also bring change and salvation?