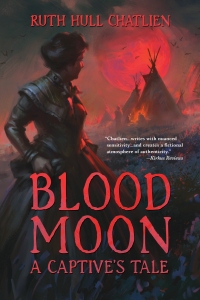 With recent press on the dangers of cultural appropriation, Ruth Hull Chatlien provides readers and writers with an interesting and thoughtful perspective. Ruth’s latest novel, Blood Moon – A Captive’s Tale, released this week.

The moment I heard about Sarah Wakefield’s experiences as a captive during the deadly Dakota War of 1862, I knew I had to tell her story.

The Dakota War of 1862 took place between the Dakota people and white settlers of southern Minnesota, but it’s not widely known because it’s overshadowed by the Civil War. Minnesota is the ancestral homeland of the Dakota (also called the Sioux), but by 1858 when Minnesota achieved statehood, the United States government had convinced them to relinquish nearly all their lands in the state. All that remained was a narrow strip of land running along the Minnesota River. In return, the Dakota were supposed to receive gold payments each June. However, they benefitted very little from that money because they had to obtain supplies from white traders, who often cheated them.

Things came to a head in the summer of 1862. Minnesota had experienced two years of drought and a brutally harsh winter, which left the native inhabitants close to starvation. Settlers had been pouring into the state and hunting the region’s game until it was scarce, putting further strain on the food supplies. Despite the dire conditions, traders on the reservation refused to extend credit so the Dakota could buy food in advance of their annuity. Then the unthinkable happened. Because of the ongoing Civil War, the federal government was short on cash reserves in 1862—and the gold payment was delayed for weeks.

In mid-August, four young warriors massacred a white family, sparking an uprising. For six weeks, war tore apart the southern third of the state. Historians estimate that some 400 to 600 Minnesotans lost their lives. In addition, hundreds of people were taken captive. At the end of the six-week war, the Dakota released 107 white and 162 mixed-blood prisoners to the U.S. army.

Among them were Sarah Wakefield and her two young children. Sarah’s husband John was a government-appointed physician at one of the two agencies on the reservation. When the war broke out. John tried to send his family to a nearby fort for safety, but on their way, two warriors stopped their wagon, killed the driver, and took Sarah and her children prisoner. Fortunately, one of their captors was a Dakota acquaintance who decided to protect them.

Very early in planning this novel, I realized that no matter how carefully I researched the history and culture of the Dakota, I couldn’t write in a native voice without getting it wrong and causing offense. That’s why I wrote from Sarah’s perspective.

She was an unusual woman for her time. Before the war, she had studied the Dakota language, hired Dakota women to work in her home, attended church at missions on the reservation, and visited Dakota villages, chatting and smoking with the women there. During her captivity, she adopted Dakota customs and dress as a survival strategy, and she did her best to be as useful and cheerful as possible. Her fellow captives criticized her harshly for these actions. Then, after the war was over, Sarah testified on behalf of the man who had protected her—an act for which white society rebuffed her.

Because she was unusually sympathetic to the Dakota, I decided to use Sarah as a bridge character to explore both sides of the conflict. I adopted the most tightly focused, subjective point of view I could: first person, present tense. Everything is filtered through the lens of Sarah’s understanding without any retrospective wisdom—but because the historic Sarah Wakefield tried to understand and defend the Dakota, my fictional Sarah Wakefield does too.

To make the story as accurate as possible, I did a lot of research. I read not only Sarah’s memoir about her captivity but also several general books about the war, a collection of Dakota testimonies, and two ethnographies about the Dakota people. I even taught myself a smattering of Dakota words and phrases to try to replicate the speech of a white captive communicating in a still-unfamiliar language.

Writing this book was a tremendous learning experience, and I hope the resulting novel will be both eye-opening and enjoyable for readers.

Congratulations on your latest novel, Ruth. I wish you great success.