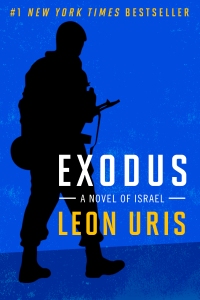 I read Leon Uris compulsively in the 70s, devouring Exodus, Mila 18, Armageddon, Trinity, QB VII and others. I loved his compelling narratives and intense pacing as well as his heroic yet flawed characters. I appreciated the way he related pivotal moments in contemporary history such as the founding of the State of Israel, World War Two, and the Cold War. His books were – and are – ‘unputdownable’ stories.

So I was more than delighted when approached by Trident Media Group, a leading literary agency, to participate in their efforts to celebrate Uris’s work alongside the publication of new editions of eight of his novels in e-book format.

A high school dropout determined to be a successful author, Leon Uris wrote meticulously researched novels that often reflected his own personal experiences abroad. Once published, EXODUS spent more than a year in the no. 1 position on the New York Times bestseller list and sold five million copies by 1965. According to a New York Times article, when preparing to write Exodus Leon Uris “read nearly 300 books, underwent a physical-training program in preparation for about 12,000 miles of travel within Israel and interviewed more than 1,200 people.”

Almost all of Uris’s subsequent novels were bestsellers, with his 1967 novel TOPAZ adapted for the screen and directed by Alfred Hitchcock. The author passed away in 2003 at the age of 78.

Trident Media Group is offering 5 free copies of Exodus and you could be one of the lucky winners! Enter the contest by sending me an email mktod[at]bell[dot]net or by adding a comment to this post, to my Facebook page, or on Twitter specifically mentioning the giveaway.

To whet your appetite, here’s the first chapter of Exodus. And you can find out more about Leon Uris on this Facebook page.