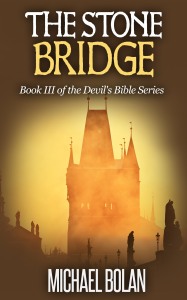 Michael Bolan is an Irishman based in Prague who writes historical fiction with a strong fantasy element. He’s the author of The Devil’s Bible Series is an adventure set in the mid-17th century in central Europe with a good dash of weirdness derived from the religious and superstitious beliefs of the time. Michael’s topic today is propaganda – a topic all of us should consider when reading or writing historical fiction. Here’s Michael to tell us all about it.

I’ve been reading a lot of historical fantasy recently, or more exactly, alternative history. I love the way that some authors use a historical framework as the skeleton of their story, but then flesh out the final version with dazzling details that might, or might not, have happened. The biggest issue I have at the moment is that when I set down my Kindle and pick up a newspaper, I still find myself reading alternative history. You too can change your life! Simply pick up a different newspaper and Brexit will not happen, or Trump will usher in an age of enlightenment, or Russia is ‘the good guy’.

Why let the truth get in the way of a good story?

Churchill despaired at people’s naiveté, and their unquestioning belief in the media’s “lies, damn lies, and statistics”, but he was being unfair on the masses. After all, when two different, but equally credible, media tell you that opposing statements are true, how can an average person be expected to make a rational decision? And so politics is relegated to the realms of reality TV, allowing demagogues to rise to power on the populist vote.

Welcome to a world where propaganda is king.

I knew that propaganda, as an official and recognised tool of brainwashing the masses, had been around for a long time, but I mistakenly assumed its birth was in the darkness of the World Wars.

It turns out that propaganda, as we know it, was something that the characters in the Devil’s Bible Series would already have been familiar with. And it wasn’t created by politicians, or by the ruling houses, but by the Church.

In 1622, Pope Gregory XV founded a new college to train missionaries who were to be sent, not to the New World, but to Protestant Northern Europe, in an attempt to stem the tide of anti-Catholic sentiment sweeping the continent. It is commonly accepted that the Pope’s intention was simply to spread the word – propaganda fide means propagating the faith – and had nothing to do with deceit. Historians often suggest that the term was a neutral one, with no sense of what we nowadays call ‘spin’, that is making rational decisions harder by sharing biased information.

I’m not sure I believe that the Pope was quite so naïve.

In a world where only a minority could read, and where only a minority of those had access to current information, creating an army of missionaries who would spread the word according to your beliefs would offer almost unlimited power over the will of the masses. It would be like Donald Trump owning and managing all of the TV and radio stations in existence. Or like his friend Vladimir Putin, who does in fact control the media in Russia. And power corrupts. So while Gregory might have simply thought he was spreading the faith, he was in fact doing much more.

The Devil’s Bible Series is set at the end of the Thirty Years War, a conflict which started because of religion, but finished because of power, and the Church was not immune to the mortal manifestations of political might. Not content with a virtual monopoly on the afterlife, the Catholic Church wanted material wealth and influence, so it used all available tools to ensure its earthly goals.

The war was the first of its kind, insofar as it was a perfect example of media propaganda. Only a few years previously, advances in printing technology had allowed for the production of the world’s first newspapers, and the establishment of regular postal services enabled their distribution. While those that could read were still in the minority, their numbers were increasing, and they enjoyed great influence with the common folk. Moreover, copperplate printing allowed for vivid images to be reproduced – a picture tells a thousand words – especially for the illiterate. Politicians and religious leaders no longer needed to rely on fellow man to distribute the word. In the first half of the 17th century, most countries went so far as to implement censorship laws to try and prevent unfavourable stories being shared.

So even though he might have had good intentions, Pope Gregory’s vehicle was copied, improved on and used to spread disinformation. The result? Within years, all sides of the war had been rocked by conflicts entirely made up in the press – stories of confidential letters seized on the battlefield – strangely akin to Wikileaks’ current revelations. On both sides, the ruling classes began to employ intellectuals to respond to their enemies’ propaganda and to create their own. They were aware of the relationship between controlling their populace and being able to act outside their borders, something which remains unchanged over the past four centuries. For the duration of the war, increasingly elaborate stories were traded, and eagerly devoured, with devastating effect. For example, England spent the 1620s arming itself against a planned invasion which had been supposedly been leaked by the Spanish Council of State. The leak was false, but it kept England out of a continental war.

So when you open your newspaper tomorrow, think of the elaborate lies that were traded four centuries ago during the Thirty Years War, and think about the one aspect of propaganda that has changed. Time was when the creator of the misinformation had to share it somehow, be that via word-of-mouth or via formalised media. Nowadays, we are all too often like the sheep in Animal Farm – we do our masters’ bidding when we spread falsehoods willingly, simply because we want our voices to be heard.

Intriguing, Michael. Your post is a great blend of modern day and historical perspectives. Best wishes for your series.

The Stone Bridge: Book III of the Devil’s Bible Series by Michael Bolan – The Rapture continues to wreak havoc across Europe in its quest to acquire the elemental Seals, the only thing preventing the Devil’s Bible from purging the world in fire. Brought to Prague by the Fianna, the Seals’ only protection lies in the secrecy that shrouds them.

Reinald, leader of the Rapture, enlists the world’s greatest minds to free the Devil’s Bible from the depths of Prague Castle, where it has languished under lock and key for centuries. Meanwhile, the plans of the Four Horsemen unfold, wreaking havoc and misery across the entire continent.

Not content with forcing his siblings from their ancestral home, Reinald sends a vast army to harry and persecute them, forcing them to flee ever eastwards. Taking shelter with their friends, Willem, Leo and Isabella commit to one last act of bravery, making a final stand to defend the city of Prague.

As each nation commits its final resources into the conflict, all roads lead to the Stone Bridge that divides Prague, where the Sons of Brabant and their Fianna allies will face the ultimate test of their strength.

3 thoughts on “Propaganda and Historical Fiction”