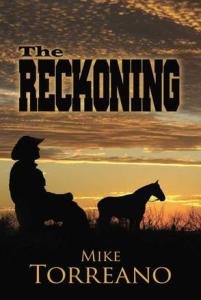 I met Mike Torreano at the 2015 HNS conference in Denver and chatted about our preferred time periods and the careers we had before becoming obsessed with writing. Mike’s novel The Reckoning – a post civil war mystery – has just released from The Wild Rose Press. Today Mike talks about writing a western and the Code of the West. Over to you, Mike.

So my western mystery, The Reckoning, was just released by The Wild Rose Press. It takes place in 1868 and is the story of Ike McAlister, a Union soldier who returns from the Civil War to his hometown of Lawrence, Kansas to find that his parents have been killed by Quantrill’s raiders. He sets out on a single-minded hunt to find the killers, a search which takes him to the high plains of Colorado.

I’ve heard some people say the traditional American western is dead—all of which prompts the question, ‘if that’s so, why write a western?’ Well, it’s true that the golden age of westerns was some time back. Since then, there’s been a bit of a dry spell until recently when several big box office western movies have been released.

Are they’re coming back? I don’t know, but I hope so. If they are mounting a return, why would that be? Perhaps it’s because westerns and the Old West embody timeless values, timeless outcomes where right triumphs over wrong. Not always, certainly, but you get the idea. The American West in the 19th century was a black and white place with clear-cut rules—there were things you were supposed to do as well as things you weren’t. And if you did wrong, there were consequences, usually immediate.

There was a code of the West, even among the bad guys. Simple rules for simpler times. Unwritten, but adhered to nonetheless. The Code drew its strength from the underlying character of westerners, both men and women alike. Life back then was hard, but it was also simple. Things that needed to get done got done. Whining wasn’t tolerated. Complainers were ignored. You weren’t a victim, you just played the hand you were dealt.

If you’re getting the idea that I like that kind of culture, I guess you’re right.

The world we live in today sometimes baffles me. Everything seems to be different shades of gray. Honor and fidelity don’t seem to be in fashion. Our culture is filled with victims. People are entitled.

While the Code of the Old West was unwritten and existed in various forms, there were certain common elements that everyone—from the hard-working sodbuster, to the law-abiding citizen, to the hardened criminal—typically abided by. Granted, there were exceptions, but generally that held true.

In 2004, Jim Owens synthesized the Code into 10 guiding principles in his book, Cowboy Ethics- What Wall Street Can Learn from the Code of the West.

Let’s take a look at three of these.

How about number 7—Ride for the Brand? It means be loyal to the people in your life—from family and friends, to those you work for. That last part refers to the idea that when you work for someone, you should work for them.

Take a look at number 4—Do what has to be done. Life is oftentimes messy, our days are filled with ups and downs, and we make choices all the time. This is about choosing to get done what has to be done, then getting on with something else.

Next, there’s number 9—Some things aren’t for sale. The Code gave westerners a guide to live by that they broke at their own peril. Are there still things today that aren’t for sale? What are they for you? They might be different for each of us, but at the end of the day I’d wager we all still have values that are non-negotiable. After all, values don’t really change, only times, circumstances, and people do.

Have these values that the Code embodied vanished from our society today? The good news is no, they haven’t, but sometimes it seems they’ve been driven underground. Popular culture tends to look down on old-time values, or should I say timeless values. We’re an instant gratification society that focuses on the here and now, and disregards the lessons of the past. Imagine a world where you sat with your family at night, sometimes even talking with each other. What a novel concept. Imagine a world where a man’s word was his bond. Where handshakes took the place of contracts.

Or as Arthur Chapman says in his poem, ‘Out Where The West Begins’—

Where there’s more of singing and less of sighing,

Where there’s more of giving and less of buying,

And a man makes friends without half trying—

That where the West begins.

So, yes, sometimes I yearn for those simpler times amid the hustle and bustle of today’s world. Where we are inundated with various media platforms from morning to night. Sometimes Ike’s world looks pretty appealing. Still. To many of us. That’s why the western will never die.

The Reckoning by Mike Torreano

Ike McAlister returns home to Kansas after the Civil War, his soul bruised and empty. Worse, his parents have been killed by Quantrill’s raiders who are still on the loose. No stranger to death and destruction, he vows to run the killers down.

A clue leads him to the high plains of Colorado, but when his sister, Sue, disappears there his world quickly spins out of control. In the midst of this turmoil a feisty landlady sparks an attraction that’s the only good thing in Ike’s life.

Now, in a race against time he must make a deadly choice. If he continues to pursue the killers, Sue will likely never be found. If he veers off to find her, the killers’ trail will likely go cold. Which track to follow? Will the love of family triumph in his broken heart or will it be the passionate hate of revenge?

Many thanks, Mike. I’m so delighted to have you on the blog today. Your perspective on the code is very timely. Wishing you lots of success with The Reckoning. You can also read Mike’s post on what makes historical fiction unique.