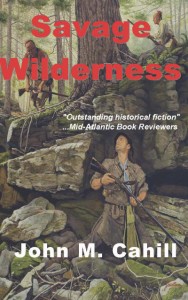 Today’s guest – aren’t we lucky to have such interesting guests stop by? – is John Cahill. John was born and raised in the history-rich Berkshire Hills of western Massachusetts. It was there that the works of James Fenimore Cooper, Kenneth Roberts and Walter D. Edmonds stimulated a lifelong interest in American colonial history.  Later, while living in New York’s Mohawk Valley, he immersed himself in the history of 17th– and 18th-century New York and explored the interaction of the Dutch, English and French settlers and traders with the Five Iroquois Nations. Take it away, John.

Furs and Foes: Tales of the Early American Frontier by John Cahill

The third quarter of the 17th century was a time of turmoil in colonial New York (previously, New Netherland). The British had taken the colony away from the Dutch for the second time in 1674, but it was still very much a Dutch world from Manhattan to Albany and extremely dependent upon the trade in beaver pelts.

By the 1680s, however, the fur trade at Albany was in trouble as the Iroquois could find fewer and fewer beaver within their territory. In order to keep themselves supplied with arms and the ironware which they had come to value, they attacked French trading parties going to the Great Lakes for weapons and trade goods and those returning from the Great Lakes for furs which they could then trade at Albany.

Needless to say, this situation highly antagonized the French. Unable to sway the allegiance of the Iroquois, the governor of New France, Joseph-Antoine le Fèbvre de La Barre, mounted an attack on the Seneca, one of the Five Nations of Iroquois. However, La Barre’s invasion ended ignobly when his army was stricken with fever and forced to return to New France without firing a shot.

These, then, are the historical facts behind Primitive Passions, Book 1 of The Boschloper Saga, which was released in Spring 2015. The story is told through the eyes of my fictional protagonist, Sean O’Cathail, a young Irishman who deserted from the English navy and went to Albany where he became a fur trader and the British governor’s envoy to the Iroquois. Book 2 of the saga – Savage Wilderness – is now available in paperback and ebook formats from W & B Publishers at http://www.a-argusbooks.com/ and other online booksellers.

The facts of Savage Wilderness are that, by 1687, the flow of beaver pelts to Albany had slowed to a trickle. In response, New York Governor Thomas Dongan granted licenses to Albany traders to enter French territory and divert the furs of the Far Indians in the west from Montreal to Albany. However, as the expedition set out for the Great Lakes, the new governor of New France, under orders from King Louis XIV, mounted another invasion of Seneca territory. Caught in the middle, the Albany traders were captured by the French and their Indian allies and sent to Montreal and Quebec where they were held as bargaining chips in the continuing power play between the governments of New France and New York. At this point, Sean found that his adventure was only just beginning. He would need all his wits to survive and return home.

I became interested in this historical period while living in Albany and began researching it when I retired. Most important to me, at that time, was the fact that, despite the evidence of the Dutch presence throughout New York State, very little attention had been paid to the period.

As I read more and more, I began to suspect that the reason for the apparent lack of interest was due to the fact that the Dutch, when they came to Albany to trade for furs, just sat there and waited for the Indians to come to them! “Oh, boy,” I thought to myself, “Isn’t this exciting!”

It was not until I moved to Vienna, Austria, that things really began to come together for me. While working in the Austrian National Library, I discovered a Young Adult encyclopedia, in English, about explorers. It identified two Dutch fur traders who had had the courage to leave the confines of their little village on the Hudson River and go out into the wilderness: Johannes Roseboom, who was the leader of the ill-fated 1687 expedition to the Great Lakes; and, Aernout Viele, who had accompanied Roseboom and later explored the Susquehanna, Ohio and Mississippi rivers while seeking to open trade with the Shawnee Indians.

There! I had some things to hang a plot on! Now, where would I find source materials? In the Austrian National Library, of course! There, I came across a volume entitled Documents Relative to the Colonial History of the State of New York procured in Holland, England and France: Vol. II (Holland Documents: 1657-1678). Shortly thereafter, I found volumes III (London Documents: 1614-1692) and IX (Paris Documents: 1631-1744).

I had found the mother lode of source materials for the period in which I was working!

These materials, published in1855, were the product of the work of one man, John Romeyn Brodhead. Brodhead (1814-1873) was an American diplomat who devoted himself to the study of the colonial history of New York. While serving as an attaché of the American Legation at The Hague in 1839, he discovered that the Dutch archives were rich in materials on the early history of the state. At his urging, the New York Historical Society encouraged the New York State Legislature to appropriate funds for Brodhead to gather and translate, where necessary, documents from archives in England, France and the Netherlands.

After spending I don’t know how many Euros coping pages from the three volumes, I learned that the entire collection, volumes I to X, was available online! For free!

And, as they say, the rest is history!

Readers can learn more about John Cahill and his research and writing at www.john-m-cahill.com .

SAVAGE WILDERNESS by John M. Cahill – In 1687, the English Colony of New York is in dire financial straits. The flow of beaver pelts, the life’s blood of the colony, has slowed to a trickle. In response, New York’s governor grants licenses to Albany traders to enter French territory and divert the furs of the Far Indians from Montreal to Albany. Although only recently married to Laurentje, Sean O’Cathail joins the small group of adventurers who have the courage to face the savage wilderness. However, the governor of New France learns of their plans, and the traders must avoid capture by the French and their savage allies. Optimistic that they can avoid detection, Sean and his fellow boschlopers begin to cross the Great Lakes. But, when they are surrounded and captured, Sean finds that his adventure is only just beginning. He will need all his wits and the help of Kai, the beautiful Mohawk woman who was once his lover, to survive and return home. Available at Argus Books and other retailers.

2 thoughts on “Furs and Foes: Tales of the Early American Frontier”